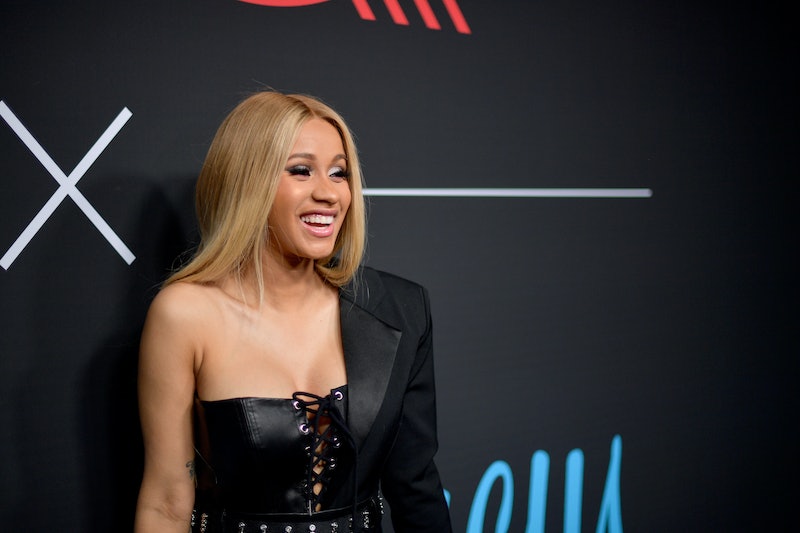 Whether on Instagram or in an interview, you can guarantee that Cardi B will give you an unfiltered and rich version of herself. In fact, when speaking to Cosmopolitan for her April cover story, the artist gave even more raw insight into her life. But it's Cardi B's comments about respecting strippers that offer the perfect example of her being herself, unapologetically.

When it comes to talking about her past and why she doesn't hold back from doing so, the "Finesse" rapper told Cosmo:

"People say, ‘Why do you always got to say that you used to be a stripper? We get it.’ Because y’all don’t respect me because of it, and y’all going to respect these strippers from now on."

Cardi B is known for being super open when it comes to addressing parts of her life that some may hesitate to talk about. For the rapper, however, showing regret over being a stripper once upon a time isn't something she's going to do — ever. According to Cardi B, she began exotic dancing at the age of 18, but quit at 23 once she reached social media stardom.

Today, Cardi B says frequently how she has nothing but love for women in the profession, and instead of belittling exotic dancers, she thinks that they should be respected just as any other entertainer would be. Because at the end of the day, according to the star's Cosmo interview, "Just because somebody was a stripper don’t mean they don’t have no brain."

Though she's pretty vocal in embracing it, Cardi B's past being brought up by anyone in an attempt to disparage her seems undeniably sexist. When male rappers with a not so clean past share details about their lives, they're celebrated. Artists like Rick Ross, Pusha T, and even JAY-Z are famous for making tracks inspired by their less-than-perfect lives, and rarely catch flack for it. But when a female rapper like Cardi B shares about her rise to fame openly, insults and slut-shaming ensue.

If anything, it appears to be a tactic used to try and remind her of her humble beginnings, and convince her that she's not worthy of the super stardom she's obtained since. However, it goes without saying that Cardi B is talented. After all, sharing a Billboard achievement with Queen Bey isn't something a fluke is capable of.

Exotic dancers don't necessarily have the best reputation. In fact, the career comes with a ton of stigma. And for a woman, such as Cardi B, to break into the entertainment industry as she did, that stigma somehow leads to insults thrown her way. But despite the naysayers — whether feeling threatened by her star power, or convinced that Cardi B isn't the best role model — the rapper is going to continue being herself without any apologies.

Within the Cosmo cover story, Cardi B also touched on her fiancé's cheating allegations, and her refusal to change for anyone. And as you guessed, the rapper didn't hold anything back when opening up about these subjects either. While talking about the latter, however, the "Bodak Yellow" rapper dropped a major gem about true happiness that many could benefit from: "If I change myself, then I’m going to lose myself, and I won’t be who makes me happy."

What's most inspirational about Cardi B is her devotion to being herself, and by staying true to that, she's been able to appeal to so many markets (hello, Amazon Alexa commercial?). Hopefully by continuing to live her life unapologetically, Cardi B can help change the oppressive narrative surrounding female rappers, and encourage more people to walk in their truth, regardless of whoever's watching.