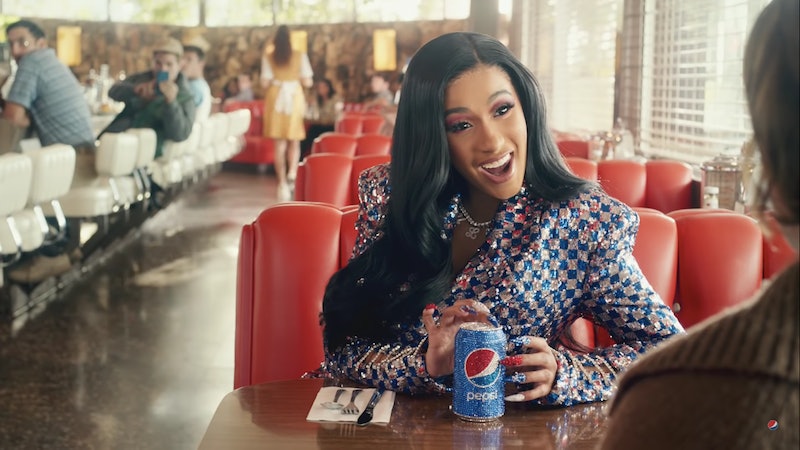 Atlanta may be the home of Coca-Cola, but that didn't stop Cardi B's Pepsi nails from winning the Super Bowl, at least the game of commercials. The "I Like It" rapper stared in the big game's annual Pepsi ad, and honestly, if you're not a football person, it may have just been the best part of the evening? While yes, it is because Cardi B is a national treasure, it's also because the nails she was sporting in the commercial were next level, even for Cardi B.

According to Refinery29, Cardi B looked to her famous nail artist Jenny Bui to help create the nails for the game, and the final result was actually a combination of both Cardi and Bui's ideas. The nail artist explains that she wanted to recreate the Pepsi can on the rapper's nails, but being the smart woman she is, Cardi didn't want to reveal that she was doing a Pepsi ad. Now, fans of the "Bodak Yellow" artist have officially gotten a look at those gorgeous claws.

The genius of Cardi's element of surprise isn't the only incredible thing about her nails, though. They're also home to 500 crystals. Yes, you read that right. There are a massive 500 crystals on those nails, and nothing could be more fitting for the woman who just won the Super Bowl.

In the commercial, the brand plays on the infamous question "Is Pepsi OK?" Considering the Super Bowl is being played in Atlanta, the actual home of Coca-Cola, it was genius move. Even more genius? Having the commercial star Cardi B, alongside Lil Jon, who are both well-known for their famous ways of saying OK — or "Okurrr" if you're Cardi B.

Cardi enters the diner, where Steve Carrell is being asking if Pepsi is OK over Coke, and she looks like the crystal-covered Pepsi spokesperson of your dreams. Wearing a bejeweled blue-and-white checked mini dress, Cardi may make even the most loyal of Coke lovers rethink their loyalty.

For those who don't know, Cardi B almost won the Super Bowl in another way. According to Billboard, the rapper was actually asked to perform the halftime show of the famous football game. On Saturday, she told the Associated Press that the decision to turn down the gig was hard, but ultimately the correct choice. Cardi cited her husband, Offset's, love of the game as a factor in her difficult decision, but she decided to turn down the offer in order to support former NFL player and activist Colin Kapernick, who is still unsigned by the organization allegedly due to his peaceful protests during the national anthem at previous sporting events.

While you won't be catching Cardi B offering up a brilliant performance during a Super Bowl just yet, she was kind enough to grace fans with an appearance in a Super Bowl commercial. In perfect Cardi B fashion, her amazing catchphrase, incredible sense of style, and those amazing 500-crystal covered nails, mean that despite not playing in the game (obviously) nor performing at it, she still managed to win the Super Bowl.