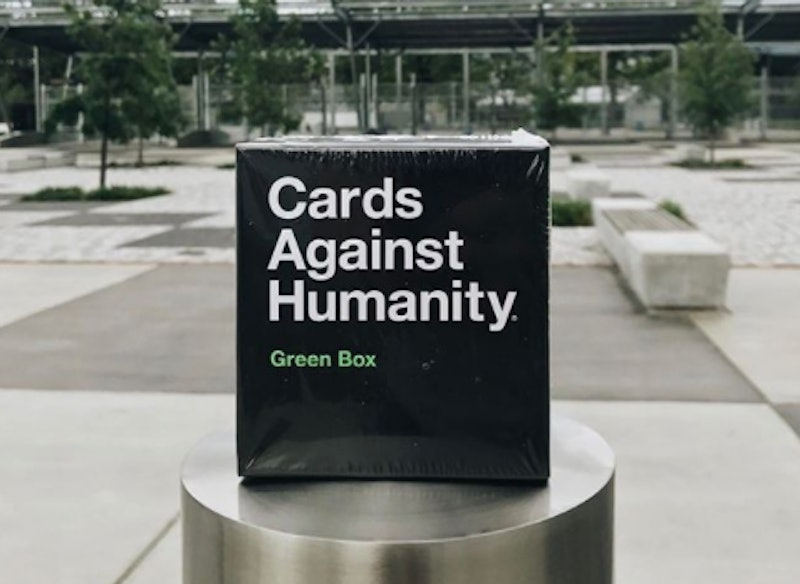 Last month, beloved adult card game Cards Against Humanity announced that since no one else had stepped up to the plate, it would save America from itself. First, it promised to prevent Donald Trump from building his border wall, or at least to make it really difficult for him to do it. Now, Cards Against Humanity gave $1000 each to 100 people to address the widening income gap between the poor and the astronomically rich. It was also just a nice thing to do — especially for a company that built its empire on being a "party game for horrible people."

Not long before Thanksgiving, Cards Against Humanity announced the return of their annual holiday promotion. But rather than buying a square foot of land on a private island or paying them to dig a pointless hole somewhere in Illinois, customers forked over $15 to be part of Cards Against Humanity Saves America. Throughout December, the company will announced six surprises, each with its own website. The first two already took place, and on Monday, it revealed the third: a redistribution of wealth.

Based on responses to a survey taken while signing up and geographical census data, Cards Against Humanity divided subscribers into groups based on need. About 140,000 of them received nothing. 10,000 others received a $15 refund. Finally, 100 people were given $1,000. All of the money was redistributed from what people paid to sign up for the holiday promotion in the first place. I'll let the game explain its reasoning via the aptly named Cards Against Humanity Redistributes Your Wealth website.

"In order for Cards Against Humanity to truly save America, we realized we would have to tackle the biggest issue in the world: wealth inequality.

Here are some crazy facts: Today, eight men own the same amount of wealth as the poorest half of humanity (almost 4 billion people). Most Americans can't come up with $400 in an emergency, and one in five American households have zero or negative wealth. ... Our lawyers advised against our first choice — a campaign to eat all the rich people and live in their houses — so we settled for something more achievable."

The rest of the website features testimonials from 13 of the people who received checks for $1,000. Their situations differ wildly, and they all have different plans for the money: paying off medical bills, flying home for the holidays, saving up for a wedding, and more. Despite the differences, all of them seem incredibly grateful, not to mention relieved, for the financial windfall.

Kimberly, a graphic designer from New York, wrote that she has been struggling with student loans.

"I've been falling behind on paying back my student loans and this money would really help me out. It's been a tough year. I quit my job a few months ago because it wasn't where I wanted to be. It left me feeling stuck and more stressed as the year went on. I'm currently doing freelance work as a graphic designer and tutoring on the side, but it’s been tough for me to keep up with the payments. This would be a huge weight off my shoulders and even leave me with some spending money to splurge on my family for the holidays."

Khan Dragmire, who lives in Idaho, will be able to breathe easier for a while.

"I will use this money towards paying off college debt/education expenses. I am a disabled/special needs student so it means the difference between having supplies/time to 'barely pass' vs. having what I need to be ahead, or at least at equal vantage point.

It’s genuinely the difference between living off of ramen and paranoid-checking of the bank account daily to be sure it has enough to pay our bills, vs. having a small amount of leeway.

It means I will feel more free to visit my family, if I so wish, instead of working through the holidays to survive. This would be amazing for me, as I haven't seen my family in three years!”

Courtney from Florida summed up what many others appeared to feel. "This kind of financial help, this type of unsolicited kindness from strangers, it means a lot of things right now but they probably all translate out to happy crying," she wrote.

Cards Against Humanity also provided a helpful FAQ section explaining that they considered factors like occupation, health, demographics, and debt when choosing recipients of the money. They also excluded certain groups like minors and all Canadians. ("They already have universal healthcare. They’ll be fine.")

To a household that makes $250,000 a year — which would place you squarely in the top five percent of American earners — a check for $1,000 may not seem like much, but Cards Against Humanity Redistributes the Wealth has made its point. When you struggle to make ends meet, like so many Americans do, $1,000 can make a huge difference.

By the way, the game company recognizes that it might have missed out on some people who could have used the money, but it points out that redistributing the wealth isn't actually its job. "We had to guess how much money you had with limited data," the website reads. "The US government actually knows how much money you have and has trillions of dollars to redistribute. Why don’t you get mad at the US government?"

Good question. If you are mad at the government for not redistributing the wealth, Cards Against Humanity has a handy list of organizations fighting to solve wealth inequality.