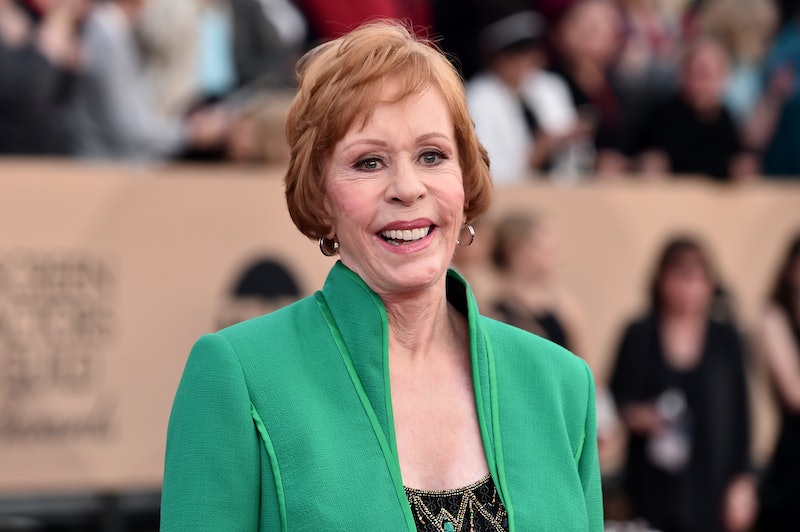 Almost a week after the 2019 Golden Globes nominees came out on Dec. 6, the online arguments over what should and shouldn't have received those nominations have finally started to peter out, just in time for a new update from the Hollywood Foreign Press Association. On Tuesday morning the HFPA announced that Carol Burnett will receive a lifetime achievement award at the Golden Globes, and it's an award that will honor the TV star for decades to come, as it will be known as the Carol Burnett Award.

Since 1952, the Golden Globe Awards has honored an individuals with the Cecil B. deMille award for their life's work, but now the Carol Burnett Award will specifically serve as a lifetime achievement award for one's work in television, starting at the 2019 awards show on Jan. 6

In a press release announcing the exciting new award, HFPA President Meher Tatna called Burnett a "trailblazer" for her TV career that spans over 50 years, including starring in her own iconic variety show, The Carol Burnett Show. "She was the first woman to host a variety sketch show," Tantna said. "She was also the first woman to win both the Mark Twain Prize for American Humor and Kennedy Center Honors. And now we add another first to her running list: the first recipient — and namesake — of the new Golden Globe top honor for achievement in television, the Carol Burnett Award."

Burnett won five Golden Globes over the course of her career and six Emmy awards, though she's been nominated at the Emmys 23 times total. Needless to say, the Golden Globe Awards certainly picked the right person to inspire its first TV lifetime achievement award.

The HFPA plans to present future Carol Burnett Awards to people who have "made outstanding contributions to television," whether on-screen or behind the cameras. The press release announcing the new award specifies that the recipients of the award will have had a lasting impact on the television industry, and Burnett sets the bar high considering her major contributions to entertainment.

After starting her career as a guest performer on talkshows like The Tonight Show and The Ed Sullivan Show, Burnett went on to perform on the variety show, The Garry Moore Show in 1959. Shortly thereafter, Burnett became a guest star of Lucille Ball's The Lucy Show before landing The Carol Burnett Show in 1967.

There's no doubt that Burnett was a trailblazer when it came to carving out a comedy career as a woman. At the ceremony honoring the now 85 year-old with the Mark Twain Prize for American Humor in 2013, Tina Fey, Amy Poehler, Rashida Jones, and Maya Rudolph, each commended Burnett for influencing their own careers. "I can’t tell you how much you mean to me. I love you in a way that is just shy of creepy,” Fey told Burnett at the ceremony.

In 2016, Burnett received the SAG Awards' Lifetime Achievement honor, which Fey and Poehler presented to her. In her speech at the awards show, Burnett recalled, "The network said, 'Carol, no no no. Look: All the comedy variety shows are hosted by men ... It's really not for a gal. Comedy variety is a man's game." Then, Burnett shook her head and said "No." Comedy fans around the world are forever indebted to Burnett for that, and her refusal to stick to the status quo helped her make television history.

If that isn't enough to make one worthy of receiving an inaugural Golden Globe for lifetime achievement in television and then have that award named after you, then what is?