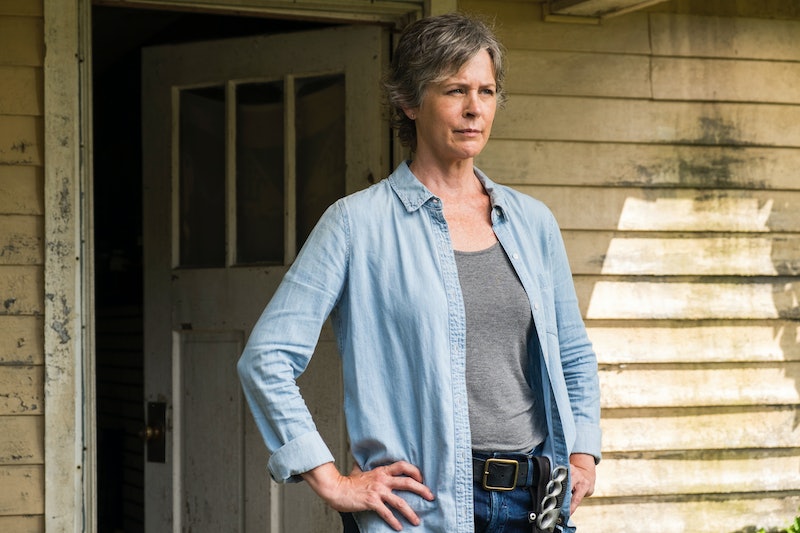 There is no time for secrets in the apocalypse, so I'm glad that Carol is no longer in the dark about Negan's villainous deeds. Morgan told Carol the truth on The Walking Dead and she finally joined the Kingdom. Not only does Carol now know about Glenn, Abraham, Olivia, Spencer, and Rick's deal with the Saviors — but she will likely be the one who inspired the Kingdom to join the fight.

Early in the episode, she confronted Morgan with her own suspicions about Jesus and Rick's visit to the Kingdom. If everything was a peachy keen as Daryl lead her to believe, why were they visiting? What could they possibly want from Ezekiel? Morgan, bless his heart, suggested that she go and ask Daryl herself. Not wanting to get in between them, he even offered to go with her to Alexandria.

However, after some soul searching (and murder) Morgan came clean. Barely blinking an eye, Carol packed up and moved back into the Kingdom proper. She went straight to Zeke, and told him that they have to get ready to fight. Yay! It won't be a real war, or even a good war, without the Kingdom. Plus, I'm thrilled that both Morgan and Carol seem as ready as they'll ever be to rejoin the group and fight the good fight.

Carol is not a mentor. She's not a soldier, either. She is fiercely independent in the apocalypse. That said, she can't deny that she cares about her fellow survivors, and the break is over. This week, it's taking down a street through of walkers with a One Way sign — next week, it's the world. The lies would only fester further, and the most important thing is that Carol knows the truth now. She's back, and the war against Negan is better for it.