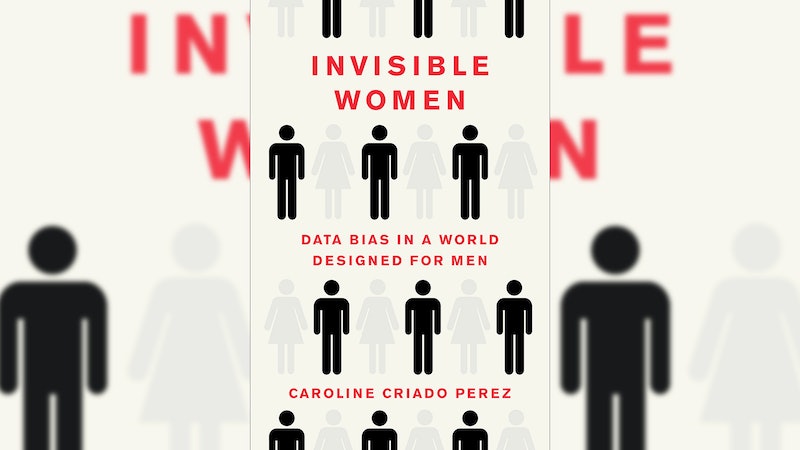 Ever wondered why you always have to keep a spare cardigan in your office, even on days when your male colleagues are comfortable in short sleeved polos? Or how about why the headrest in your automobile never seems to land in quite the right spot, no matter how much you adjust it? How many times has an attempted one-handed selfie resulted in your smartphone screen cracking against the pavement? Caroline Criado Perez has the answers to these questions and more, in her new book Invisible Women: Data Bias in a World Designed for Men, and they’re utterly exasperating. Because the answers, in essence, all boil down to exactly one thing: The world has been designed around one very specific man.

He’s called "Reference Male," and according to Perez’s massive body of research, he’s the "average" 40-year-old, 155 pound, Caucasian man. Everything from the standard for office temperature to recommended drug dosages are designed with him in mind. He influences traffic patterns and pocket size, piano keys and voice recognition software, public restroom access and video game characters. Much of the world has been constructed around his needs, habits, and ideas of comfort; much of the data about the world has been gathered based on the ways he alone exists in it — leaving everyone else out of the equation.

This is called the gender data gap. In Invisible Women, the British feminist activist and journalist examines the stats (or, lack thereof) from the home, the workplace, the doctor’s office, public life, and more in an effort to explore how the gender data gap perpetuates bias and disadvantages for women. With chapters like "Can Snow-Clearing be Sexist?" (as it turns out, yes) and "Being Worth Less Than A Shoe" (as some women find themselves to be) Invisible Women is about as furious as a book filled with statistics can be.

Because the answers, in essence, all boil down to exactly one thing: The world has been designed around men.

"…the lives of men have been taken to represent those of humans overall. When it comes to the lives of the other half of humanity, there is often nothing but silence," writes Perez, in Invisible Women. She begins by explaining how numbers impact our daily lives, demonstrating that nearly everything comes down to the data we have on it — product design and accessibility, the structures of public space, healthcare, the allocation of resources, the writing of laws, the way we make decisions. When it comes to women, she explains, the data is egregiously lacking. When it comes to disabled, working-class, and minority women, data is effectively non-existent.

Built on hundreds of studies from the United States, the United Kingdom, and around the world, Invisible Women shows how data views men (and often, “Reference Male”) as the default human, considering everyone else atypical; and who wants to design a world around the “atypical”, anyway? Even though, ironically, when it comes to sheer numbers, the “atypical” comprise more of the global population than the standard male.

As Invisible Women illuminates, in an almost overwhelming way, communities pay tremendous costs for the gender data gap: costs of income, time, women's health, and sometimes women's lives. For example: that commonly-held knowledge about taking an aspirin if you suspect the onset of a heart attack? Turns out, that’s a recommendation for men, not women. Recent studies conducted on women for the first time have shown that taking an aspirin either has no effect on the severity or prevention of heart attacks in women, or actually can have potentially harmful effects. Heart disease, for what it's worth, is the leading cause of death for women in the United States.

While men are statically more likely than women to be involved in a car crash, women are 47% more likely to be seriously injured in a car crash and 17% more likely to die in one. While casual observation might lead one to assume this is because women tend toward being the physically "weaker" gender, that is not so. Instead, the data places causality on how cars are designed and manufactured — a.k.a., around the male body. Like just about everything else.

Or how about one study, on female Viagra of all things, which featured data on only two women — the rest of the clinical trial participants were male.

"The evidence that women are being let down by the medical establishment is overwhelming," writes Perez. "The bodies, symptoms, and diseases that affect half the world’s population are being dismissed, disbelieved, and ignored. And it’s all a result of the data gap combined with the still prevalent belief, in the face of all evidence that we do have, that men are the default humans."

In one especially heartbreaking study — not from the healthcare industry, but rather education — it was shown that the gender data gap begins to affect the way females exist in the world as early as six years old. It’s called brilliance bias, and it’s teaching — however unintentionally — young girls that they are simply not as naturally intelligent as their male peers.

"A recent US study found that when girls start primary school at the age of five, they are as likely as five-year-old boys to think women could be 'really, really smart,'" writes Perez, of this same brilliance bias. "But by the time they turn six, something changes. They start doubting their gender. So much so, in fact, that they start limiting themselves: if a game is presented to them as intended for 'children who are really, really smart,' five-year-old girls are as likely to want to play it as boys — but six-year-old girls are suddenly uninterested. Schools are teaching little girls that brilliance doesn’t belong to them."

In spite of all this data — or, to the point, lack thereof — Perez is mindful to note that the gender data gap itself is not inherently rooted in misogyny or intended to deliberately harm or ignore women. At least, not most of the time. It’s simply a thing that’s done, because it’s a thing that’s always been done: those who design everything from seat belts to smartphones, who study everything from traffic patterns to prescription drugs, who determine a country’s laws and how it’s wealth is spent, have never been required to think from the perspective of a women. And so, they don’t. “One of the most important things to say about the gender data gap is that it is not generally malicious, or even deliberate,” Perez writes. “Quite the opposite. It is simply the product of a way of thinking that has been around for millennia and is therefore a kind of not thinking.”

"Schools are teaching little girls that brilliance doesn’t belong to them."

Oh yeah, and in case you’re still wondering about the sexism of snow plowing? Policy changes in Sweden, mandating gender-equality initiatives in all areas of public life, resulted in the discovery that something as benign as snow-clearing is not, in fact, gender-neutral. Several Swedish studies led to the conclusion that snow-clearing schedules prioritized a smaller population of driving males, and not the notably larger number of women who utilized public sidewalks and transit to go about their daily lives. The subsequent changing of the snow-clearing schedule cost relatively nothing — but it also had the surprising effect of saving cities money (on hospital admissions, which increased, primarily for women, due to winter weather-related injuries.) So, there you have it. Even snow-clearing can be sexist — at least, when it doesn’t account for half of a community’s population.