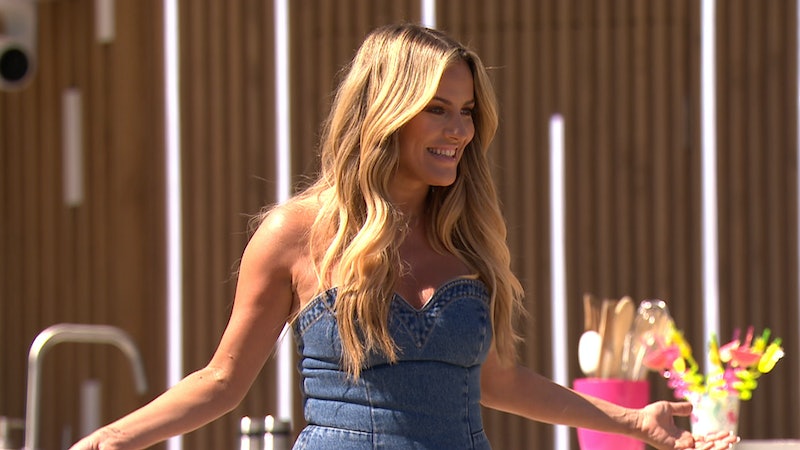 The fashion obsession that arises from Love Island falls into two distinct camps: the personal style of the many Islanders and the sartorial choices of the Flack. The series may have only just started, but its celebrated presenter has already impressed with her first villa look. On the opening episode of the fifth season of Love Island, Caroline Flack opted for a denim dress and social media went wild.

Fans of the 39-year-old had already seen a sneak preview of the strapless look as, on Sunday, the Flack showed off the designer ensemble on Instagram. Yes, I did say designer. Although the presenter routinely wears affordable high street designs, this particular denim style was created by Scottish talent Christopher Kane. And according to Heart radio, it costs £498. If that's way too much splash to cash, you don't need to be green with envy as the summer-ready dress has already sold out online.

If you're dying to recreate Flack's first Love Island look, the high street, as always, has provided a much cheaper alternative. Missy Empire's bandeau denim dress is a similar length to Flack's and only costs £39. However, the style is only in stock in a UK size 8, 10, or 12.

To meet the first Islanders, Flack paired her sweetheart-necked look with a heeled pair of tan sandals. There's no official confirmation of where the shoes are from, but they do look suspiciously similar to this wooden pair from River Island. The fact that they form part of Flack's collaboration with the high street brand makes it even more likely that these are indeed the ones on her feet. Thankfully, this particular item will only set you back £55.

According to the Mirror, Flack is set to be wearing a lot from River Island over the coming weeks. Earlier this month, the paper reported that the presenter had signed a £1 million deal with the retailer to wear its clothes on Love Island. “For River Island, her wearing their clothes means they are targeting the exact market they want — women in their late teens and twenties," a source told the paper. It's only obvious that she will also plug her own River Island line on Love Island. Released in May, the 22-piece collection boasted summery prints, wide-legged silhouettes, and even a statement lipstick.

If you want more of a clue into Flack's on-screen wardrobe, her stylist Nisha Grewal is the woman to turn to. She has already spoken to The Sun about what to expect. As with previous years, love is on the cards. "I'm constantly trying to sneak in a heart or a love element into Caroline's clothes," Grewal told the paper, adding: "I like to align her outfits with the location she’s filming at so if it’s a re-coupling in the villa, it’s always bright and summery. I love bold prints."

Ultimately, that sounds like a lot of positive vibes which makes sense because Flack has said that's what the show is all about. Responding to the criticism that has plagued Love Island, she recently told Digital Spy: "We've stood for positivity from day one. We're a show about love. There's nothing more positive in the world than love. That's what we create and are aiming for."