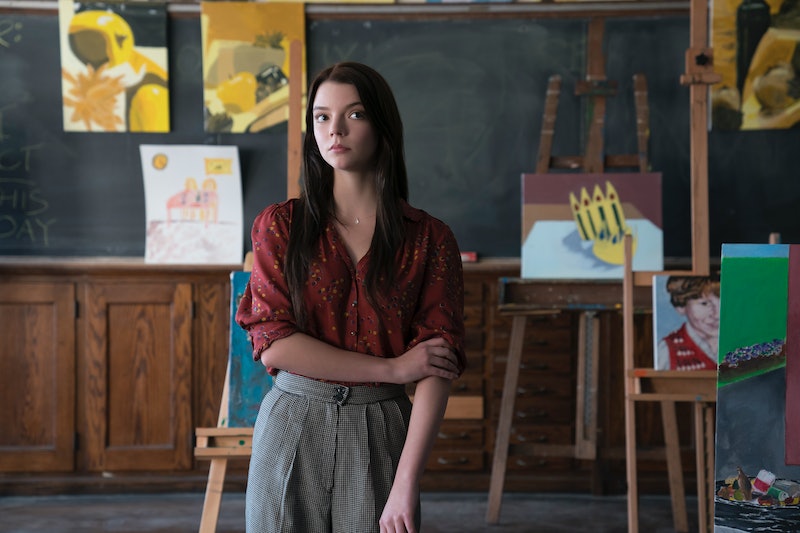 In Split, Anya Taylor-Joy plays high school student Casey Cooke, one of several girls kidnapped by James McAvoy's Kevin Wendell Crumb — or actually, the personalities Kevin created to cope with his own trauma. She returns to the role in Glass, the sequel to both Split and its predecessor Unbreakable, out in theaters now. And like Taylor-Joy herself, Casey is a little older and a little wiser. "I’m just really proud of her, which sounds crazy, because I know she’s technically not real, but she’s real to me," the actor says, bare feet pulled up underneath her in a chair at the Crosby Street Hotel in Soho, New York City. Spoilers for Glass and Split ahead.

As the story of Split unfolds, the audience learns that being held captive by 24 distinct personalities, one of which is a superhuman killing machine called "The Beast," isn't Casey's first brush with violence and coercion. She's also a survivor of abuse, at the hands of her uncle. In the end, that's what saves her — that she's able to share Kevin's suffering.

It's a tricky theme to explore, and Glass picks right up where Split left off in that regard. Casey is again called upon to be sympathetic to her former captor. Dr. Staple (Sarah Paulson) even tells the young woman, who's still in high school, that she has to show physical affection towards Kevin to help calm him and thereby save others. Some viewers may raise an eyebrow at that, but Taylor-Joy, who says that Casey is "ingrained in her soul" by this point, finds this extension of the character to be truthful and "really beautiful."

"Just because she’s a woman, that’s not the reason she’s the face of compassion. She’s the face of compassion because there’s been a deep wound inside of her for ages that has now been healed. Or has started to heal, from this experience," she says. "And she now feels that it’s her god-given mission to return this favor to another broken person who feels the same wound that she does."

Each of the extraordinary humans at the center of Glass have a regular human counterpart — someone who believes in them and is tied to them in some way. For David Dunn (Bruce Willis), it's his son Joseph (Spencer Treat Clark), who's known since his youth that his dad is a superhero; for Elijah Price, it's his mother, Mrs. Price (Charlayne Woodard), who's watched him struggle since he was born. It's established in Split that Kevin's mother was abusive. His father, we learn in Glass, died in the same train derailment that David survived. Kevin's personalities took care of his only other ally, his therapist, in Split. So the only person left is Casey, someone who was kidnapped, held captive, and terrorized by some aspect of him. To Taylor-Joy's credit, Casey never appears weak, but their relationship is still complicated and occasionally troubling.

For Taylor-Joy, returning to this onscreen pairing was bittersweet, and really difficult at times — especially in the moment where Casey ensures that Kevin lives his last few moments as himself, instead of giving over "the light."

"The connections that you make on set are such odd, beautiful, fragile things, and with James, I almost feel that the intense chemistry that we have as Casey and Kevin almost keep us... like, we’re very good friends, but we also treat each other with like teflon gloves," she says. "That last scene was hard. We both had a tough time doing it, and it was one of the most heart-wrenching moments I ever had to experience in front of a camera for sure."

Though there's certainly a lot to unpack in what's asked of Casey, by reviving Split's controversial central relationship, Glass reminds audiences that Taylor-Joy's character is not a victim, no matter what she's gone through.