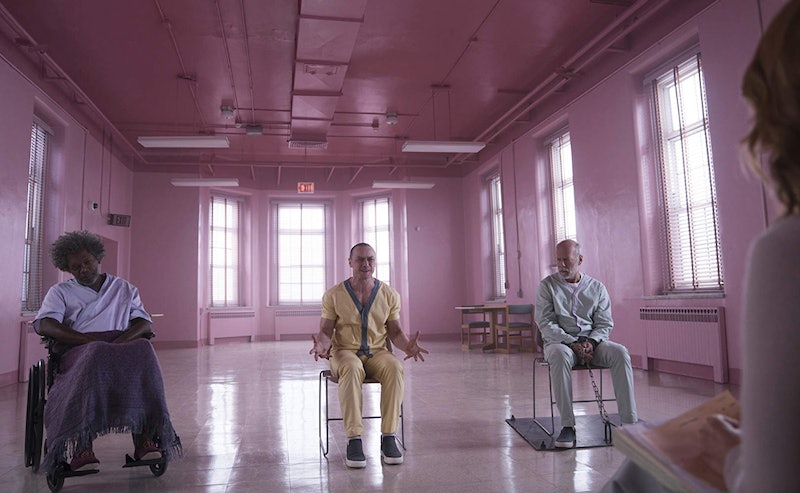 After 19 years, M. Night Shyamalan is bringing an end to the Unbreakable trilogy with Glass, in theaters now. This maybe-not-quite final installment combines the stories of both Unbreakable and Split, re-introducing hero David Dunn (Bruce Willis) and villains Kevin Wendell Crumb (James McAvoy) and Elijah, a.k.a. Mr. Glass (Samuel L. Jackson). In this one, they’re brought together when they’re under the treatment of psychiatrist Dr. Ellie Staple (Sarah Paulson), who specializes in patients who believe they have superpowers. Both of the previous films had big twists, and Shyamalan is continuing the tradition. The Glass twist ending proves he's still master of them.

Major spoilers ahead. The first big twist comes when David’s son, Joseph (Spencer Treat Clark) discovers Kevin’s harrowing family history, which played a large role in turning him into a villain. Joseph reveals that Kevin’s dad died in the same train accident that David survived (and Mr. Glass caused), forcing Kevin to live under the care of his abusive mom, which made him process his pain by becoming evil and embodying his most dangerous personality: The Beast. Elijah then confesses that just like he orchestrated the train accident so David would survive and become a hero, he also did so in order to turn Kevin into the second villain in the story.

But just as Kevin processes this realization, the three men are killed by a SWAT team that has been alerted of their escape from the treatment center. David is drowned in a puddle, since his weakness is water; Kevin is shot in the chest, dying in Casey’s (Anya Taylor-Joy) arms as he begins to regret his actions; and Elijah suffers injuries that leave him immobile and bleeding to death.

And you might have suspected, Dr. Staple (Sarah Paulson) knew they were super all along. Instead of being a therapist treating delusions, she’s actually part of a group that wants to get rid of both superheroes and villains because exposing them to the public means that then there’ll be too many.

But if you thought that was the biggest twist, you were wrong. In the film, Elijah tells Kevin that he’s planning to escape to kill the crowd going to see the grand opening of a skyscraper in Philadelphia, and trains him to unleash The Beast. And Elijah also challenges David to escape his room by knocking his metal door open, proving that he’s actually super. Elijah and Kevin make their escape through a tunnel, until they’re quickly caught on camera.

But wait, Elijah is far too witty to have planned to escape where he knew there’d be cameras, right?

Here’s where the next twist comes. Turns out, Elijah was planning a suicide mission, and he wanted to take down Kevin and David with him. But before dying, he wanted a big final battle. And he used the cameras as a way to record and save proof that superheroes — and super villains — do exist, ruining Dr. Staple’s plans.

Despite Elijah’s death, the final battle is shown to the world with the help of Joseph, Casey, and Elijah’s mom (Charlayne Woodard), who share the videos on social media. Elijah’s role as a comic book villain might not have lasted very long, but in the end, he's invited a new generation of superheroes and villains to take over. In the world of Glass, super doesn’t have to be reserved for comic books.