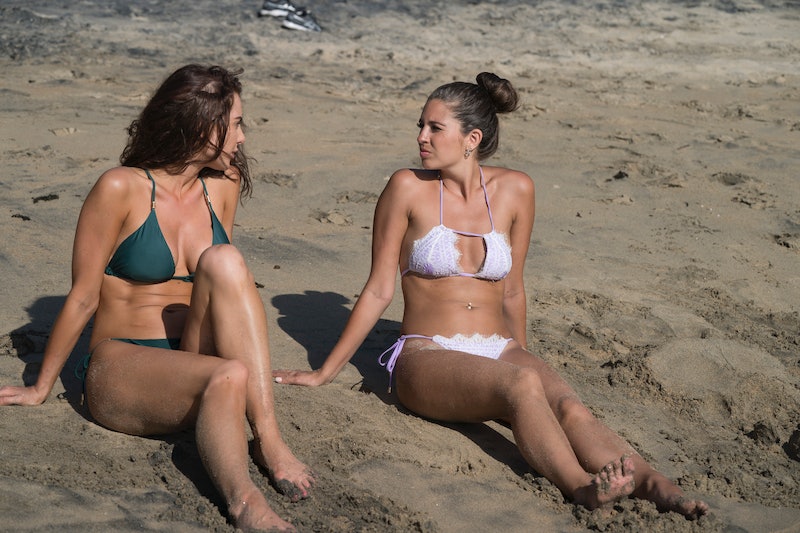 This season of Bachelor in Paradise has brought a lot of messy breakups, but it's also shown a side to this franchise that fans don't often get to see: how much the women actually do stick together, despite the fact that they're supposedly in "competition" with each other. And where the Eric/Angela/Cassandra love triangle is concerned? It's a prime example of girls looking out for each other. In fact, Cassandra and Angela's talk on Bachelor in Paradise is proof that the women have been sticking up for each other a lot this season — and honestly, who doesn't want to be informed that the person they're dating may not be who he says he is?

Angela was a mess when Eric agreed to go on a date with Cassandra, since he had just told her that he was "all in" with her and their relationship. During their date, he told Cassandra that Angela simply didn't want to move as quickly as he'd like her to in their relationship, and when they got back, Eric's talk with Angela went downhill fast.

But as soon as it was over, Angela went to find Cassandra and talk about it, and instead of getting angry, Cassandra was totally receptive to everything she had to say — and this, fellow Bachelor fans, is what we call a major dose of girl power.

Angela laid it all out there for Cassandra — she and Eric had decided they weren't going to see any other people, and then the next day, he immediately decided he was going on a date with Cassandra without even checking with Angela first. As Cassandra heard the story from Angela's point of view, she was even laughing because of how different it was from what Eric had told her originally.

In fact, it was so different that it immediately gave Cassandra pause about continuing a relationship with Eric.

"I wanna believe her, and I want to hear her out, because I've had bad experiences with men," she said in her ITM interview. "I wouldn't want someone who flip flops like that."

It was refreshing that Cassandra took Angela's words at face value, instead of immediately going for "oh, she must be jealous," like we've seen on this show in the past. Armed with this new information, she went to talk things out with Eric, who tried to save face by saying he thought he handled the Angela situation perfectly.

"I would not want a guy to do what you did," Cassandra told him, laying it all out there. "I would want him to be a little more respectful and talk to me before he went on his date. You could have approached it differently. You could have done a lot of things differently."

In the end, Cassandra realized that her relationship with Eric was now "tarnished," and they decided to go their separate ways. This was probably for the best, especially since a friendship between Cassandra and Angela would likely last longer than any BiP relationship would. Maybe we'll get to see that happen next?