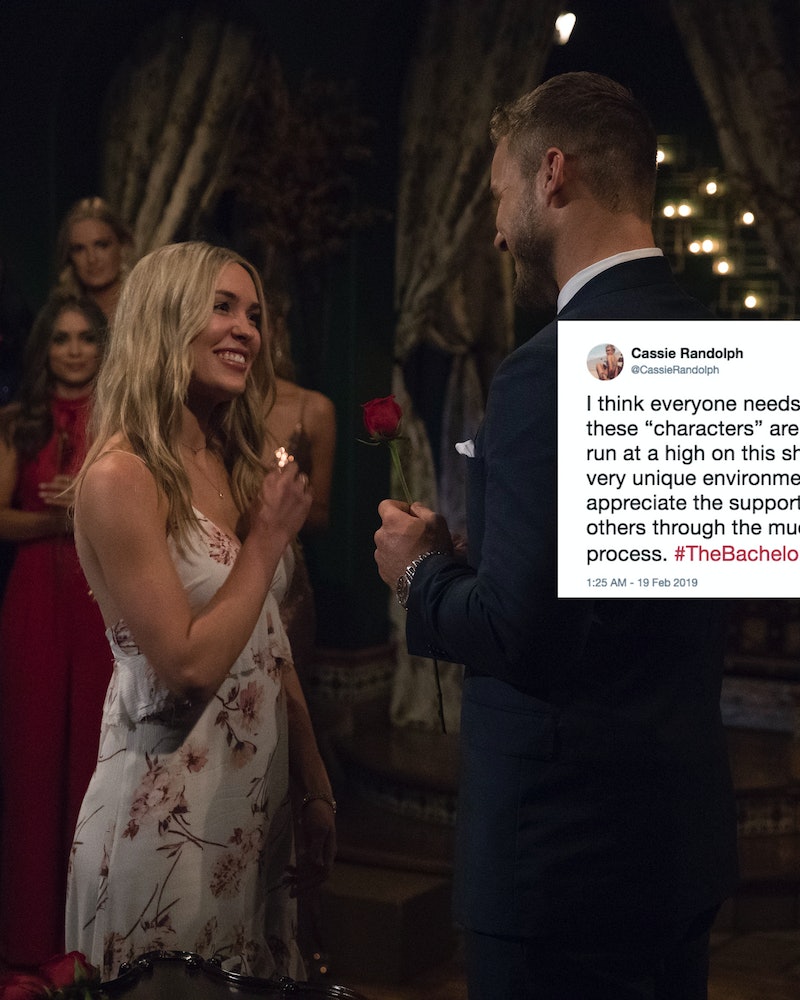 The last Bachelor episode was full of "she said, she said" drama. After Tayshia and Kirpa claimed Cassie and Caelynn were not ready for marriage and wanted to be the next Bachelorette, contestants weren't the only ones who got upset. Social media trolls posted some nasty comments, too — mostly at Tayshia and Kirpa's expense. In response, Cassie tweeted about how fans shouldn't judge Bachelor contestants so harshly, and her sentiments were echoed by her fellow cast members.

On Feb. 18, Cassie wrote a message about the social media hate:

"I think everyone needs to remember that these 'characters' are real people. Emotions run at a high on this show and we are in a very unique environment. While I very much appreciate the support, please do not drag others through the mud or bully in the process."

Cassie didn't mention any names or cite any particular comments, but fans can infer based on the televised drama. There was actually a buildup to all this drama for the past couple of episodes. During the Feb. 11 episode of The Bachelor, Colton said goodbye to Sydney, Demi, and Katie. During their exits, all three of the ladies warned him that there were remaining women who were not there for the right reasons.

On the Feb. 18 episode, Colton was still wondering which women they were referring to. He was fretting over the possibility of making a mistake or even offering the final rose to a woman who does not want to accept it.

In that same episode, Tayshia named Cassie and Caelynn during a conversation on her one-on-one date with Colton. This resulted in a Tayshia vs. Caelynn confrontation back at the house with zero resolution.

Later on, Kirpa and Cassie argued about the rumors during their group date. Cassie ended up getting a rose and joining Tayshia, Caelynn, and Hannah G. as the women with invites to hometown dates.

Not only did this confuse Colton, but it also divided the fandom. Some viewers supported their favorites, but others took a different route and hated on the other women involved. One fan tweeted screenshots of several nasty comments on Tayshia and Kirpa's Instagram accounts.

In response, Colton quoted the post and wrote a message that was very similar to Cassie's. He also reminded his followers that these are real people, not fictional "characters."

Just like Cassie and Colton, Season 23 standout Demi also asked Bachelor viewers not to be hateful on social media. She wrote, "Ppl need to leave Kirpa and Tayshia the hell alone. They are sweet girls and the trash comments are not welcome ANYWHERE."

In a follow-up tweet, Demi encouraged The Bachelor fans to just be positive instead of hating on the ladies. This was something Cassie stressed as well. Why can't fans of the show just support their favorites without bashing the other women?

Things get understandably stressful for Bachelor contestants while filming. They're cut off from the world temporarily, devoid of phone and internet access. Conversely, their lives are up for public consumption once the episodes start airing. No one can blame viewers for being invested in the series, but there is no need to be cruel to the contestants. Just support your favorite contestants and leave it at that.