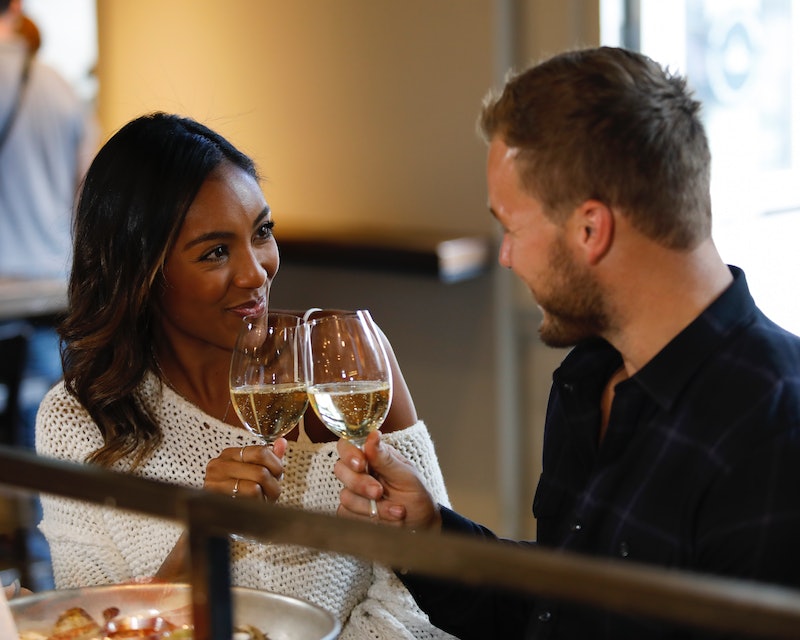 When it comes to feuding between contestants, the drama has been real on The Bachelor this season, and on Monday night's episode, it definitely got ramped up a few notches. At least once a season on this franchise, someone (or in this case, multiple someones) is accused of not being on the show for the right reasons, and yes, it is happening again. This time, Tayshia told Colton that Caelynn and Cassie are on The Bachelor for the wrong reasons, and it really hit the fan after that.

All season long, it's been pretty clear that Caelynn and Cassie are frontrunners; watching Colton's interactions with them (especially their one-on-one dates) has made that fact more than obvious. But if Tayshia's story is to be believed, they're not on the show just to find love — just to hopefully become the next Bachelorette and maybe score a few fun opportunities along the way. And as soon as Colton heard the news, he was obviously thrown for a major loop and he didn't try to hide it.

Tayshia opened up to Colton about what she heard when they went on a one-on-one date in Denver after they got to talking about how stressed out he was about figuring out which of the women was actually ready for engagement and which weren't there for him, and she shared what she knew from there.

Colton was immediately taken aback by this, and his response showed it. He said:

"That really sucks. That's terrifying for me. If I get down on one knee and say I love somebody and it wasn't reciprocated, for me, that would be probably the worst moment in my life. That's my greatest fear. That really threw me off."

Being that Tayshia's stayed incredibly level headed all season long, this is definitely out of character for her, and fans are surprised that she'd choose to stir the pot like this. This is the first time she's intentionally found her way into the middle of the drama like this, and fans have definitely voiced their opinions on how out of left field this seemed to come on Twitter.

It's hard to know how all of this will play out at this point, but Colton definitely has some tough decisions ahead of him as he gets closer and closer to his hometown dates... and then, to giving out that final rose in just a few weeks. Who is there for the right reasons? Hopefully, he'll be able to figure it out before it's too late.