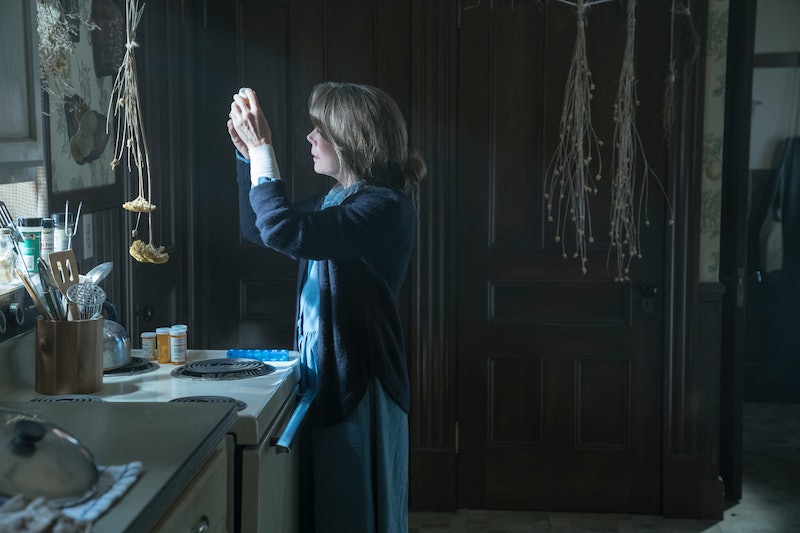 Spoilers ahead for the "The Queen" episode of Castle Rock. The supernatural looms on Castle Rock, but the Hulu series has plugged into what keeps readers coming back to Stephen King's writing book after book — the human condition wreaking havoc on characters you can't help but love. Inner demons are just as scary as outer ones. This week's Ruth-centric episode of Castle Rock dramatized Alzheimer's disease in a way that has not been done on television before — which was equal parts heartbreaking, relatable, and terrifying.

Before the Kid arrives, as the previous episode showed, Ruth is trapped in the haunted house of her own mind. The chess pieces that Ruth uses as a totem (think Inception) to pull herself out of the past help the audience keep track of what's happening as the episode weaves in and out of flashbacks.

Intertwined with the events of the past few episodes, viewers see how Ruth first became suspicious of her husband's mental wellbeing (that may or may not have a supernatural connection), suicidal tendencies, and endangerment of young Henry 30 years ago. It's because of Henry that she didn't just leave him.

In the present tense, the Kid arrives and pretends to be Ruth's dead husband. Is he giving her closure? Is he taunting her? His intentions are all unclear. For all the audience knows, he might even be altering his appearance in her mind. The show also hasn't revealed yet whether the Kid is trying to harm her. Ruth uses some sleight of hand to avoid taking the pill he offers her, so fans may never know what he was planning before she starts fighting back.

Tragically, at the end of the episode, Ruth shoots and most likely kills Alan Pangborn, thinking this time that he is her husband and she can finally do what she meant to do all those years ago. Was the Kid trying to get Ruth to kill Alan, as revenge for allowing Dale Lacy to kidnap him 30 years ago?

"Alzheimer’s disease is a degenerative brain disease and the most common form of dementia," the Alzheimer's Association states. And Ruth's struggle isn't the first time in which dementia has been a significant part of a television character's story arc. Meredith Grey's mother had early onset Alzheimer's on Grey's Anatomy. More recently, Professor X had a supernaturally-enhanced dementia in Logan. There are serious dramas about Alzheimer's like Still Alice for example, but a lot of times characters with these symptoms are written off or played for laughs. Think grandma saying something "crazy" again because she's losing her memory, or calling a character by the wrong name in order to make some kind of poignant parallel/reveal a family secret.

What makes this particular story on Castle Rock so compelling is how it's not about Ruth losing her memories or losing her mind. It's about how she is experiencing her memories, as well as time itself, in another way. Ruth needs help but is not helpless. She has agency, and the audience is right there with her.

Even the way that Wendell, Ruth's grandson, uses his augmented reality game as a metaphor for what she's going through is a beautiful, character-driven way to relate to something that a lot of people find too scary to talk about. Castle Rock treats Ruth's sickness with dignity and nuance, even if it does have tragic results.

Not only that, but this is the type of story arc that older female actors don't often get to play, especially not as a protagonist with agency. That said, Ruth's storyline on Castle Rock also serves as a nasty reminder that Alzheimer's can crop up earlier than you might think. Sissy Spacek, who honestly deserves every award for this episode, isn't even 70 years old.

Next week, the broader plot will pick back up. How will Henry escape that isolation chamber? Will Ruth go down for killing Pangborn? So much was revealed in this week's Castle Rock in such an interesting way, but there are still many questions that are left unanswered.