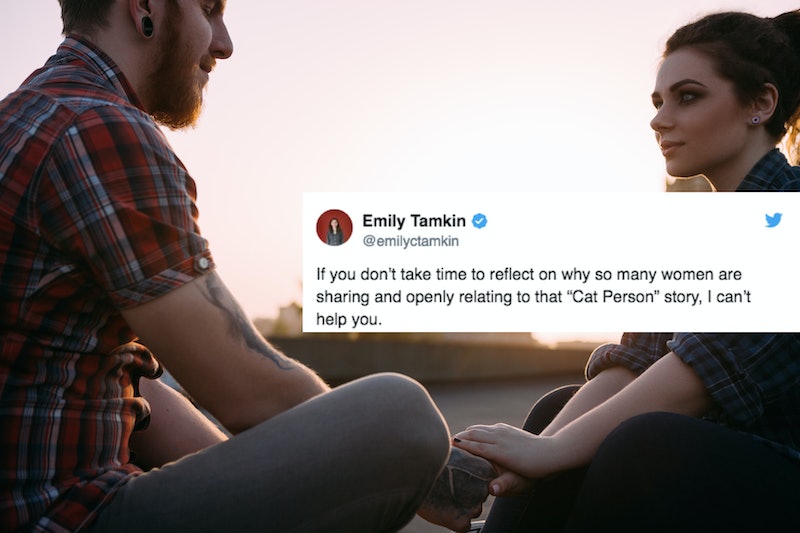 A short story titled "Cat Person", published in The New Yorker's Dec. 11, 2017 issue, went viral for revealing some harsh realities about gender dynamics in modern dating. If you haven't read Kristen Roupenian's story, you should because there's a good chance it may feel very real. (FYI, there are spoilers ahead).

The story focuses on Margot and Robert, who meet at the movie theater Margot works at. They start texting and eventually go on a date and have some disappointing sex. When Margot is interested in meeting up again, Robert quickly pulls away:

"When Margot returned to campus, she was eager to see Robert again, but he turned out to be surprisingly hard to pin down. 'Sorry, busy week at work,' he replied. 'I promise I will c u soon.' Margot didn’t like this; it felt as if the dynamic had shifted out of her favor, and when eventually he did ask her to go to a movie she agreed right away."

And if that dating game doesn't feel familiar, then maybe this unfortunate sex scene will:

"At last, after a frantic rabbity burst, he shuddered, came, and collapsed on her like a tree falling, and, crushed beneath him, she thought, brightly, This is the worst life decision I have ever made! And she marveled at herself for a while, at the mystery of this person who’d just done this bizarre, inexplicable thing."

I have definitely, definitely been there. But it's not just a particular scene that I resonated with, the whole thing captures something difficult to describe about gender roles in dating today. "I thought the story was great and very relatable to young women dating today," relationship therapist Aimee Hartstein, LCSW tells Bustle. "...The nasty twist at the end where he’s trying to reach out to her and get her to respond was the most shocking part. It’s a disturbing window into some men’s mixed up and hostile feelings towards women. He wants her and feels rejected but can’t sit with those bad feelings so ends up putting them on her by calling her a whore. It’s particularly disturbing right now given our current conversation about sexual harassment and abuse."

Though the story may feel shocking, for a lot of women, the mixed messages, the games, and the lack of respect feels all too familiar — a guy at a bar tells you you're pretty and if you say you're not interested, immediately calls you a "b*tch". It may happens on dating apps or after a few dates, so it's no surprise that so many women who date men wanted to share this story on social media.

In fact, women on the internet basically exploded with how close it hit to home. Here's what they had to say.