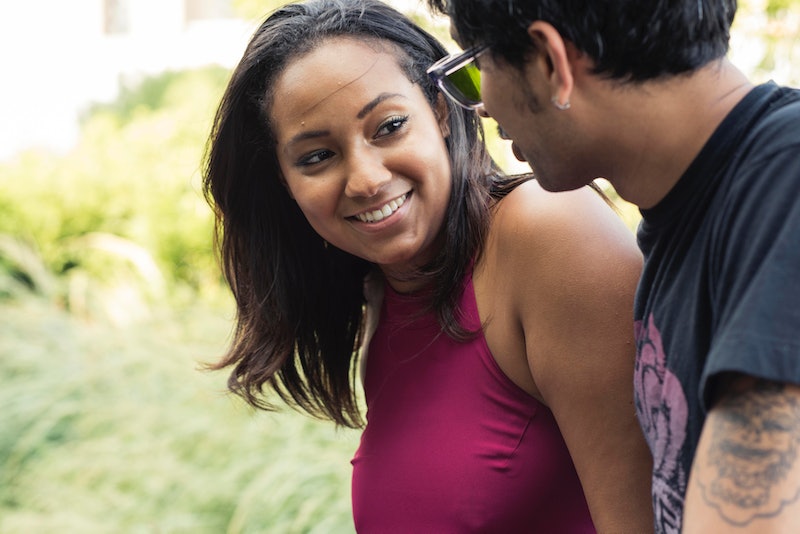 Recently, I've been enjoying a very particular type of dating. I have a serious partner I'm committed to, but we're in a non-monogamous relationship where we're allowed to (more casually) date other people. Because of this set-up, I have to say, I've been getting a lot better at first dates than ever before. Probably because there simply isn't as much at stake for me now if a date goes badly, I've learned to really hone the power of being direct and honest.

Instead of worrying a ton about coming off as charming, or asking a bunch of questions that will somehow ingratiate the other person towards me, I'm just myself — and own it. We know confidence is hot, but more specifically, I think what we mean when we say that is that honest and kind confidence is hot. Being honest on a first date isn't about bragging, auditioning, or provoking the other person. It's about asking the questions you genuinely want to know about them, and being sincere and kind in return.

When I was in my early 20s, there were lots of things I usually wanted to know about someone on a first date that I thought were "too personal" or "awkward" to ask. I'm here to say, "f*ck that." Since I've started asking more of these supposedly awkward (read: direct and confident) questions, I've found that not only does the other person find it refreshing and sexy, but I end up saving both of us time if we find we're not compatible.

Here are eight questions you shouldn't be afraid of asking on a first date, so long as you solicit them with kindness. If your date gets offended anyway, that's probably on them.

If someone is giving you the rundown on their job, living situation, or creative endeavors and sound disgruntled or cynical, don't be afraid to ask them this question as a follow-up. They will probably appreciate the opportunity to reflect, and if you can tell that they seem to be answering one way while their body language is telling you something else, that tells you a lot about their potential to be honest with themselves and with you.

As long as you're not asking the question judgmentally, there's no reason why they should be offended by it. You have a right to know whether you're about to get involved with someone who's more passive than you'd like.

2. "Do You Believe In [Insert Ethical Dealbreaker For You Here]?"

My current partner asked me about my belief in eating animals on our first date, and non-monogamy on the second. These were two moral issues that he'd learned were important to him in any relationship, and far from feeling tested or judged when he asked me about them, I appreciated his directness and interest in my answers.

Anyone who tells you these types of topics are "too personal" for a first date is clearly more interested in having a second date than they are having a compatible partner. It's OK to have moral dealbreakers, even when it comes to casual dating. So, go ahead — ask how they feel about the election, God, abortion, or whatever else. It will save both of you time if you find you can't agree.

3. "What Are You Looking For Right Now?"

I think women especially feel awkward asking this one, because we're afraid of coming off like we're looking to "trap" someone into a serious relationship. However, since I started going on dates as a non-monogamous person, I've come to appreciate this question, and I've been impressed by how often men now ask it of me. Like most of the questions on this list, this is simply about giving the other person permission to be honest — and allowing you to see how reflective and compatible they are in the process.

I was out on a particularly awesome first date last week when I asked this one. It might sound rude, but if you ask it right, it's actually quite the compliment, and a cute way of implying interest, perhaps less overtly than saying, "How are you still single?!" Since we'd been talking about politics and our work for the first two hours, I pivoted, saying, "I feel like we should talk about some more personal stuff, since this is a date."

"Sure," he said. "Like what?" I paused, thought, and then pretty much blurted the question out. For a second I was worried, but then he laughed in that way a cute, mature guy does when he's refreshed by your honesty.

"Wow, you just went for it, huh? I like it," he said. Then, he shared a long answer with me about his dating history in which I found out that a) there were no red flags I could detect, b) he was emotionally open, reflective, and honest, and c) he wasn't trying to hide anything, so far as I could tell. This is a totally valid question to ask on a first date, especially if you both seem interested. Their ability to answer it will show you whether this is a person worth your time, and it's even a nice way to let them know you think they're a catch.

OK, so you don't have to ask this on a first date, but too often, people wait to ask about STD testing until they're in the heat of the moment. If you can tell a date is going well, and there's a natural opening for this — like maybe if you find yourselves making out, or talking about something sexy or your health — it is totally legit to ask this ahead of when you'd actually want to have sex.

For one, it gives them a head's up that this is important to you, and some more time to get tested before your next date if they haven't been in awhile. For another, if they react with shock or judgement, it's a red flag that they might not take safety as seriously as you do. Lastly, if they take this question as license that you're automatically going to want to have sex with them, or are somehow promising to once they get tested, that's a sign that they're not mature enough to merit getting in your pants. If, however, they respond they've been tested recently or can at least remember the last time they have, you might have a safe, sex-positive winner on your hands.

6. "How Am I Different Than My Profile/Your First Impression Of Me?"

As someone who uses online dating, I've always appreciated when people ask me this question, because it shows they are open to feedback. If you can either ask or answer this question honestly and kindly, in my book, you're a self-aware person. Plus, you might find out something useful.

I was once on a date with no chemistry where I was honest with him about some confusion I'd had reading his profile. He later texted me to thank me for the feedback, and had edited nearly every point I'd addressed. So even though there was no second date, it wasn't a waste of time for him.

Check It Out: The Online Dating Bible, $9, Amazon

I just think you should be allowed to ask this question to anyone who's texting or otherwise being rude on a first date. Maybe they have a legit reason and you won't be annoyed anymore, or maybe you'll have just called them on their sh*t in a playful way, and they'll think twice about being rude next time.

My current partner asked me a variation of this question at the end of our first date, even though we'd been talking for about five hours straight before he walked me home. I found it really refreshing that he was confident enough to ask me this in person and so directly, instead of playing the coy texting game in the days after. Since then, I've also had other men ask me a variation of this question, and have always been impressed when they are able to handle the answer with grace, even if my response is that I'm not getting that vibe.

It's sort of like breaking the Fourth Wall in theater, and admitting what the situation actually is. In asking this question (without a sense of demand attached) on a date, you can demonstrate once again that you're confident, honest, and kind. It gives the other person a chance to bow out gracefully if they're not interested, and is less painful in the long run than a slow-fade rejection. I understand if you don't want to ask, but trust me, it might save the both of you a lot of time if you do.

Even better? If you can already tell you're both interested, this is a sexy way to get them to admit it too — and kiss you already.