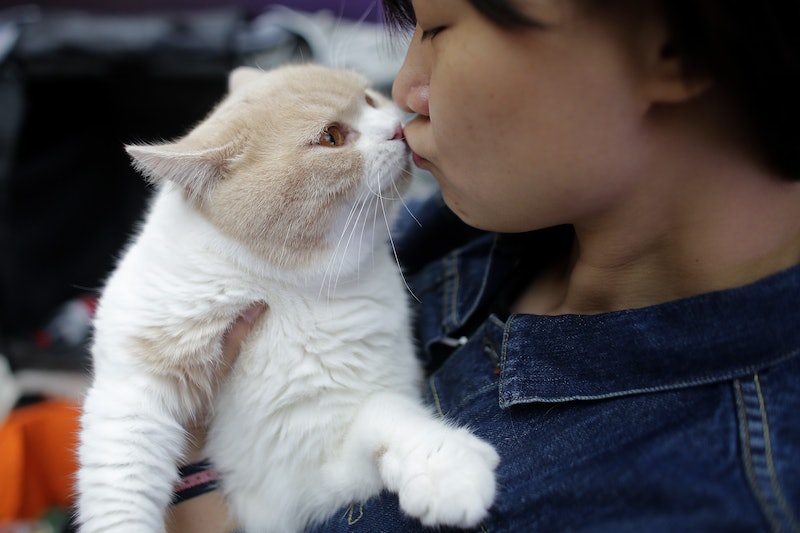 After publishing a short story in The New Yorker that was all the Internet could talk about last week, "Cat Person" writer Kristen Roupenian is reportedly expected to pull in over $1 million for her first book. Roupenian's debut will be a short-story collection, titled You Know You Want This, which was bought within one day of submission by U.K. publisher Jonathan Cape. According to The Guardian, the "Cat Person" author's first book is currently at the center of a bidding war in the U.S., "where 11 bidders have sent the price tag over $1m."

Featured in the Dec. 11, 2017 issue of The New Yorker, "Cat Person" tells the story of 20-year-old Margot, a college student and movie theater employee who begins an easy flirtation with 34-year-old Robert. The bulk of Roupenian's story can be summed up in a single sentence — "It was a terrible kiss, shockingly bad; Margot had trouble believing that a grown man could possibly be so bad at kissing." — but it's a comprehensive look at the modern-day dating scene, encompassing ghosting, awkward emoji usage, questionable-on-several-levels sexual encounters, and post-date lashings-out. Even though it appeared in one of the magazine's last issues for the year, "Cat Person" qualified as one of The New Yorker's most-read fiction in 2017, with "a record-breaking response" from readers.

Ask 25 different people what they thought of "Cat Person," and you'll get 25 different responses. Roupenian's story, the first she ever published in the literary magazine of record, generated a considerable amount of Internet outrage and praise. Some people believed Margot's willingness to go along with Robert evinced a WASP-y, well-to-do upbringing, while others found it to be overwhelmingly relatable. Did Margot's behavior legitimize Robert's texts in the denouement, or was he just another victim of toxic masculinity? So great was the public interest that The New Yorker even published an interview with the photographer responsible for the awkward kiss shown in the story's header image.

Jonathan Cape has not yet set a release date for Kristen Roupenian's first short-story collection, and U.S. publishers are reportedly still locked in a bidding war for the book, but You Know You Want This is likely to garner just as much attention as its author's New Yorker debut. Little more than the title — and that it will, presumably, contain "Cat Person" — is known about the collection at this time. Will it all be about bad sex and short-lived relationships? We'll have to wait to find out.