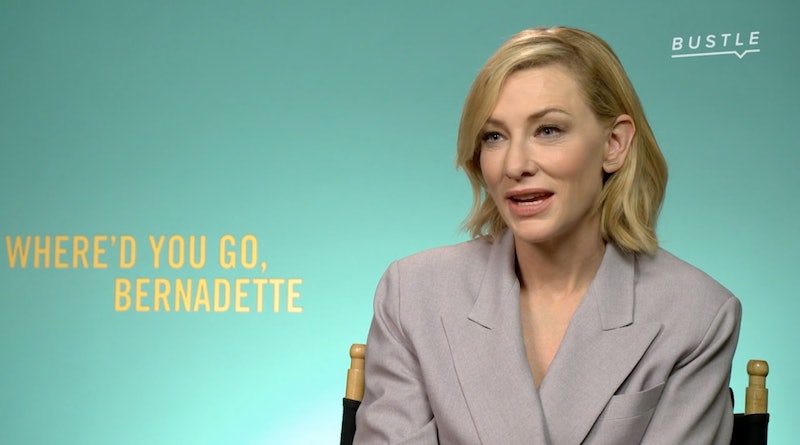 Premiering in theaters on Aug. 16, Where'd You Go Bernadette, an adaptation of Maria Semple's hugely popular 2012 novel, tells the story of Bernadette Fox (Cate Blanchett), a former architect who was once at the top of her creative industry. When audiences meet her, she's a wife and mom struggling with the absence of creativity in her life and acting out in some pretty dramatic ways. The film is full of extraordinary events that befall the protagonist and her family, so, at the film's Toronto press junket, Bustle found out what the Where'd You Go Bernadette cast would do if they were in Bernadette's shoes.

When everything happening at home gets to be too much, Bernadette runs away — hence the title and the mystery. If she were given the chance to go anywhere to escape, Blanchett says that she would have made a similar decision to her character. Unfortunately, playing Bernadette didn't quite get her to the South Pole, as Greenland stood in for Antartica on the shoot. Still, it "was the closest that I've got so far," the star says. "So that's definitely on my bucket list."

Troian Bellisario, who plays Becky, a researcher Bernadette meets and befriends in Antarctica doesn't have a specific spot in mind, but she knows she wants it to be remote. "Go where nobody knows your name, where nobody expects you to be," she says. "And to go eat, and drink coffee, and read books. That's what I would do." The 15-year-old actor playing Bernadette's daughter Bee is more decisive. "Italy," Emma Nelson says. "Because I love Italian food."

But of course, escaping their lives would mean leaving their work and chores to someone else. In the film, Bernadette delegates almost everything to Manjula, a remote personal assistant. Asked what they would hand off if they could, Zoe Chao, who plays Soo-Lin, and Bellisario are overwhelmed by the possibilities. "So many things," Chao says. Nelson — probably like any other teen — has an easy, immediate answer: "Definitely homework. All of my homework." And director Richard Linklater, who's dealing with more adult problems answers, "If they could just answer all my emails for me..."

With the exception of Nelson, who identifies as "a social person," the general consensus when it comes to spending a year in a remote outpost in Antartica is that it's a great idea. Linklater adds that he thinks some time outer space might do him good. Meanwhile, Bellisario has a couple of ideas to keep herself entertained, but also fit, during her vacation from civilization. And Blanchett, referencing a line in the movie, says, "I would probably finally learn how to knit."

It seems that, for the most part, the actors agree that Bernadette is living the dream with her sudden disappearance and abundance of alone time. And while we can't all take a sabbatical away from our day-to-day, we can live vicariously through Ms. Fox by disappearing into theaters when the movie comes out this Friday.

More like this
At 28, Rosie Perez Risked Her Career To Stop Playing Stereotypes
By Gabrielle Bondi
'That '90s Show' Star Callie Haverda Got Advice From Mila Kunis & Ashton Kutcher
By Brad Witter
At 28, Debra Jo Rupp Was Living A Much Different '70s Show
By Grace Wehniainen
Zach Reveals The Chaotic 30 Minutes That Were Cut From ‘The Bachelor’ Premiere
By Grace Wehniainen
Get Even More From Bustle — Sign Up For The Newsletter
From hair trends to relationship advice, our daily newsletter has everything you need to sound like a person who’s on TikTok, even if you aren’t.