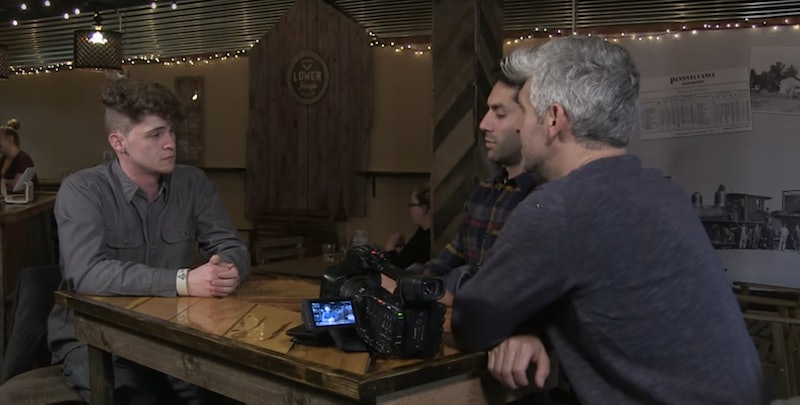 Every time I think MTV might be out of tricks that can make a Catfish episode leave me slackjawed, they manage to pull out another shocking conclusion. Catfish couple Dylan and Ally were not destined to be together in the May 3 episode, but for one of them to find out that the real person behind the other profile was a Catfish addict who couldn't even stop after being exposed on national television was unexpected.

When the episode was filmed, Dylan seemed to know that he was probably going to find out that Ally wasn't who she said she was. He certainly had plenty of the typical signs: they met online, she made up excuses like having a broken computer for why she couldn't videochat, and they spent months talking without once attempting to meet up in person, even if Ally did say she lived all the way in Oklahoma.

It took a mysterious message from an unknown number to warn Dylan that Ally wasn't who she claimed to be. And while that must have been pretty obvious to Catfish fans, Dylan was recovering from the grief of losing his mom, which must have been disorienting.

But in the time since the episode was filmed, it seems Dylan has moved on from Ally — he's been posting frequently about another woman named Kira. It looks from their Instagram accounts that the two might be in a relationship right now.

The real Ally isn't from Oklahoma, she's from Texas. Allyson Seber is still active on Facebook — she's not going to let this case of mistaken identity stop her from posting pictures of her family and connecting with her real friends. And it seems Allyson isn't particularly bothered that the fact that fake Ally was using her name and pictures — she's even joked about it on Twitter.

And as for Mary, the catfishing addict who was unable even to promise that she would pretending to be someone else online, has her own personal social media accounts where she shares her actual face and name. So hopefully she's been working on being comfortable in her own skin. Mary decided to make her Twitter and Instagram profiles private, which seems like a wise move if she's trying to avoid interacting with random strangers or being bullied again. That's the tough part of social media — it can be a great way to reach out and talk to people and meet people, but it can also be a cruel place. Maybe these profiles show that Mary is trying to break her Catfish habit.

While Mary was unwilling to give up being a Catfish at the end of the episode, Dylan did say that he was willing to attempt to be friends with her going forward. It seems like both members of this former couple are working on their individual issues and being themselves after the show helped them expose the truth.