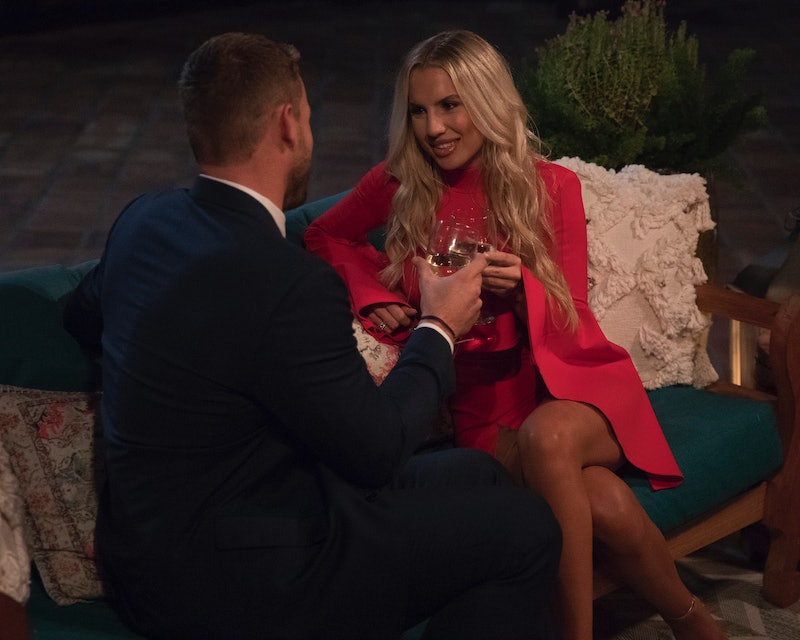 It wouldn't be a Bachelor season without a villain, and we already have an early contender. Catherine from Colton's Bachelor season was deemed by host Chris Harrison to be one to watch... out for. According to Elite Daily, when Harrison announced the new contestants during a Facebook Live video, he warned viewers to keep an eye on Catherine. "If you're looking for a villain ... I'm not saying Catherine is it. I'm just bringing up the point that if you're looking for a villain, to keep your eyes out," he hinted.

Perhaps it's fate that 26-year-old Catherine looks a lot like Krystal, who became the villain on Arie Luyendyk Jr.'s season. And even though fans haven't officially met Catherine yet, she does have some "villainous" traits — aka she's there for Colton, not to make friends. Harrison said that Catherine may break the record for "can I steal you for a sec" moments in the premiere, which is never a good sign.

The other women notoriously hate when one contestant keeps taking up the leading man's time, because there's so little of it to go around. Expect some jealous ladies to complain about how they haven't even gotten time with Colton yet and Catherine's already going back for seconds and thirds.

The other sign that Catherine's painting a villain target on her back? She knows her courting tactics are going to upset her fellow contestants and she doesn't care.

As Life & Style noted, she says in the trailer, "I am here to get to know Colton. He's my priority. Unfortunately, it's going to upset some of the other women."

As a viewer, I kind of respect the women who know what they want and realize that this is a dating show, not a "let's be best friends" show. If Catherine is all-in for Colton, that's all that really matters at the end of the day. And there's already more than meets the eye with this contestant, because her ABC bio only begins to touch on who she is.

Her bio states that she's from Florida and is a DJ by night. She also has a daughter — a "dog daughter" named Lucy, that is. Harrison said during the Facebook Live that Lucy is 70 in people years, and she's really freaking cute.

According to press photos, Catherine is actually bringing Lucy to the Bachelor mansion with her, likely because she heard how much Colton also likes dogs.

Colton has two dogs of his own named Thor and Sniper. In this photo of the snoozing pups, he called them "my all-natural anxiety medicine."

But Catherine isn't just a DJ who loves dogs. According to her ABC bio, she's a commercial real estate agent. And per her Instagram bio, she's also a twin and a "cannabis consultant." Basically that means she works in business development for a firm that advises marijuana-focused businesses.

Other than that, Catherine seems to be preemptively apologizing for any villainous actions on the show and asking for the benefit of the doubt— at least if you read into this lengthy Instagram caption:

"I'm not perfect. I'm broken. Being vulnerable takes courage. It is OK to not be OK. Do not compare yourself to others. Just try to be better than the person you were yesterday. Be kind to everyone, including yourself. Everyone is facing their own battles. Be the light in the darkness."

The show hasn't even started yet and the tea is already getting stirred. Bring on the premiere!