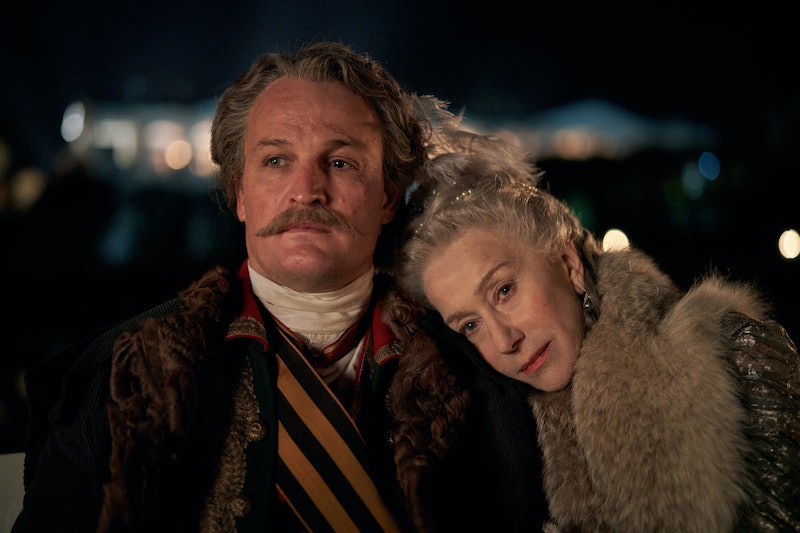 HBO's limited series Catherine the Great will introduce viewers to the ambitious Russian empress Catherine II, who reigned for an astonishing 34 years, the longest a woman has held the throne in the country's history. Catherine is an intriguing figure for present day audiences, not only because of her championing of the law, arts, and sciences, but because of her long list of high-profile lovers. Most notable is Catherine's relationship with Grigory Potemkin, which came to define much of her later life both romantically and politically.

By any standard, Catherine was a remarkably successful and modern woman. Under her direction, Russia experienced a "golden age" from 1762 until 1796, when the empire expanded its borders and adopted many Western ideals. Catherine pushed her subjects to get vaccinated against smallpox, for example, and encouraged higher education for women. Unsurprisingly, her prominence and forward-thinking ways made her a target for numerous male-led smear campaigns, who invented tall tales of sexual deviancy — from nymphomania, to bestiality, to voyeurism — to try to discredit her entirely.

It's true that Catherine the Great took lovers outside of her mismatched, loveless marriage to Peter III, but as the History channel notes, she was involved in only 12 relationships in her lifetime, and they were always military and political connections. Catherine understood, more than anyone, that a woman's most powerful negotiation tactic at the time was being able to wield her own sexuality.

After a successful coup against her husband in 1762, Catherine realized that marrying again would rob her of her power. So instead, she became romantically involved with high-ranking military generals; they helped her consolidate power, and in return, she showered them with titles and wealth.

"What's important to understand is that Catherine was serially monogamous," Helen Mirren, who plays Catherine, told the Hollywood Reporter. "Yes, she had a series of lovers, but they were lovers: she had a relationship with them ... she certainly didn't behave any more — in fact, a lot less — promiscuously than all of the male heads of state around her at the time.”

Grigory Potemkin was one such figure, but he went above and beyond being a political connection to become what historians say was Catherine's greatest love. A minor noble and a member of the Horse Guards regiment, Grigory attracted Catherine's attention early on when he helped her in the 1762 coup. (The "help" was pretty silly: he apparently provided a missing sword tassel to her before she went on the march.) Between 1768 and 1774, Grigory distinguished himself during the Russo-Turkish wars, and in 1774 Catherine and he finally got together.

Grigory was 10 years Catherine's junior and perhaps wasn't conventionally attractive — he's said to have lost one eye in a brawl — but he was clearly alluring in several ways. He was a respected military leader by the time he became involved with Catherine (and being with her only gave him more wealth and fame). He also apparently had great sexual prowess: British historian Sebag Montefiore wrote in his 2001 biography The Prince of Princes: The Life of Potemkin that Grigory had "elephantine sexual equipment," and Catherine is rumored to have had his "glorious weapon" cast in porcelain. (It's amusing, but impossible to prove this, since no artifact has been uncovered.) And he clearly had a sharp wit: in a letter to a friend, Catherine called Grigory "one of the greatest, the most comical and amusing, characters of this iron century."

Their relationship was a highly passionate one, involving many sexual trysts about the castle, but also many intellectual debates and cooperative projects. They wrote constantly to each other when separated — Catherine called him her "Twin Soul" and declared "I love you all the time with all my soul," per Esquire. Montefiore notes in his biography that it's "almost certain" that Catherine and Grigory were secretly married, and though Grigory's title changed constantly, he was essentially the "Tsar in all but name."

"History can teach us a lot," Grigory's actor Jason Clarke told TVInsider, calling Catherine and Grigory's relationship "volatile, passionate, and productive. A love for the ages. A partnership unlike any other."

The relationship was all-consuming, which is likely why it burnt out after just two years. According to Montefiore, however, the two remained close after they broke up, and Grigory's political influence remained unchanged. He even vetted Catherine's new lovers, and was rumored to have participated in threesomes with her even after they split.

When Grigory died suddenly of fever in 1791, Catherine was distraught, and Montefiore notes she never really recovered. "A terrible deathblow has just fallen on my head…my pupil, my friend, almost my idol, Prince Potemkin of Taurida, has died…you cannot imagine how broken I am," Catherine wrote.

In the HBO show, this relationship seems even more volatile and contentious than historians make it out to be, and the trailer suggests the two are even on opposite sides of a war. It will be interesting to see if the miniseries reinterprets their relationship to be one of antagonism, but suffice to say, in the show and in real life, it's clear that Catherine met her match with Grigory Potemkin.

More like this
9 Time Catherine Cawood Was An Absolute Badass In Happy Valley
By Sophie McEvoy
Shonda Rhimes Responded To The Surprise Exit Of A Day 1 'Grey's Anatomy' Figure
By Grace Wehniainen
Everything To Know About A Potential 'Lockwood & Co.' Season 2
By Gretchen Smail
This 'Gossip Girl' Wardrobe Error Has Gone Viral On TikTok
By Alyssa Lapid
Get Even More From Bustle — Sign Up For The Newsletter
From hair trends to relationship advice, our daily newsletter has everything you need to sound like a person who’s on TikTok, even if you aren’t.