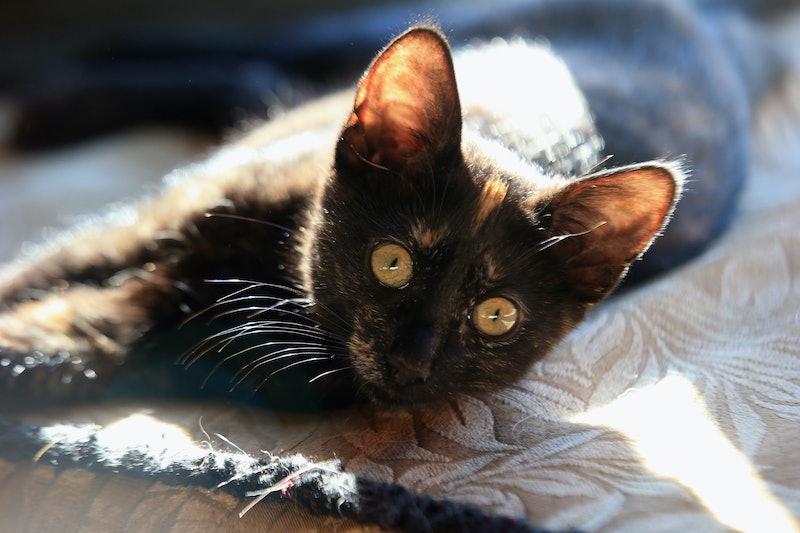 Much is often made of the difference in personality between cats and dogs — but if you’ve ever found yourself wondering if cats’ personalities differ from other cats’ personalities based on what kind of cat they actually are, guess what? It’s true: Your cat’s breed really might affect what behavioral traits they have, according to a new study. Coming to us from researchers working out of the University of Helsinki and recently published in the journal Nature, the study is one of the first of its kind, examining the relationship between particular cat quirks that ranged from whether they tend to seek out the company of humans to whether they like to suck on blankets and their breeds — so if you’re looking for a cat that has a particular type of behavioral pattern (lap cats! Cats that get along well with other cats! Cats that leave you alone and just kind of do their own thing!), the results of this study might help you figure out which breed to get.

Back in March, the team of researchers published a feline behavior and personality questionnaire online, reports Cosmos. According to Cosmos, the researchers eventually hope to use this questionnaire to gather data about a whopping 20,000 cats; for the current study, though, their data consisted of 5,726 “home-living domestic cats” (that is, none of them are strays) from around 40 breeds. Some breeds were further grouped together, resulting in a total breed number of 19.

There’s a lot of data in the study and just as much discussion, but here’s a quick look at some of what they found:

In terms of social behavior, Korats and Devon Rexes were the breeds most likely to seek out human contact, although Abyssinian and Oriental cats also demonstrated similar behavior, even if it wasn’t quite as pronounced. British Shorthairs, meanwhile, were the least likely to seek out people, in addition to having the lowest probability of aggression. Persians and Cornish Rexes were similarly low in aggression, particularly towards strangers. However, among those high in aggression were Bengals and Angoras.

Russian Blues were the most likely to be shy towards people they didn’t know, while Burmese cats were the least likely to exhibit shyness towards strangers. Abyssinians and Persians were similarly un-shy — an interesting observation, given that they’re both commonly thought of as aloof breeds.

Turkish Vans were the least sociable of the bunch: They displayed a high probability of aggression towards both people and other cats.

Non-social behavior, meanwhile, included traits like activity, shyness towards novel objects, wool sucking, and excessive grooming. Among the most active breeds were Cornish Rex, Korat, and Bengal cats, while British Shorthair, Ragdoll, and Saint Birman cats occupy the opposite end of the spectrum as the least active breed. A lot of the longhaired cats tended towards wool sucking (a habit born of either anxiety or having been weened too soon in which a cat literally sucks on blankets, sweaters, or other similar materials), including Norwegian Forest cats, Turkish Vans, Angoras, and Maine Coons; meanwhile, Burmese and Oriental cats were most prone to excessive grooming. Perhaps unsurprisingly, Russian Blues were the most likely to exhibit shyness toward novel objects.

Using the data they gathered, the researchers were also able to divide the breeds into four different clusters based on their behavior. Cluster 1, which might be considered the baseline, included Abyssinian, Devon Rex, Maine Coon, Oriental, European Shorthair, Siberian, Burmese, Cornish Rex, and Korat cats. By comparison, Cluster 2 cats, which included British Shorthairs, Norwegian Forest Cats, Ragdolls, Persians, and Saint Birmans, tended to be the least aggressive, least extroverted, and least fearful. Cluster 3 cats, however, were both the most fearful and the most extroverted, as well as the most active. Breeds included Bengal and Russian Blue cats. Lastly, Cluster 4, which comprised solely Turkish Van and Angora cats, displayed the most aggression overall.

And when it came to the question of heritability? It turns out that, yes, a lot of cat behavioral traits are likely heritable through breed. The highest genetic correlation estimates were largely found among the traits that make up personality factors, like whether or not a cat is shy towards strangers or novel objects and how aggressive they are both to strangers and to their own humans. Ragdolls and Maine Coons, for example, were found to have a genetic correlation between how active they are and whether they seek out contact with humans. Meanwhile, for Maine Coons specifically, aggression towards their human family members and towards other cats had a positive genetic correlation, while whether or not they seek out contact with people and whether they’re shy with strangers had a negative genetic correlation. All in all, about half of the behavioral traits the researchers studied were found to be heritable.

Of course, not every cat behavior can be chalked up to breed. For example, the researchers are careful to note that a cat’s early environment in particular might have an effect on how they develop. Although both the purebred cats and house cats included in the sample lived in similar environments as adults, there could be differences in the early environment of a house cat versus a purebred one: As the researchers put it, “It would be expected that pedigree cat breeders invest more time to socializing the kittens,” which could have a pretty dramatic effect on their social behaviors as they grow up.

Still, though — the implications of this study are pretty huge, and could get even bigger the more cats the researchers study. In the meantime, if you’re looking for a cat that will cuddle with you when you’re at home, here are some ideas for breeds that might work for you; and if you need some pointers on adopting a cat, head here.