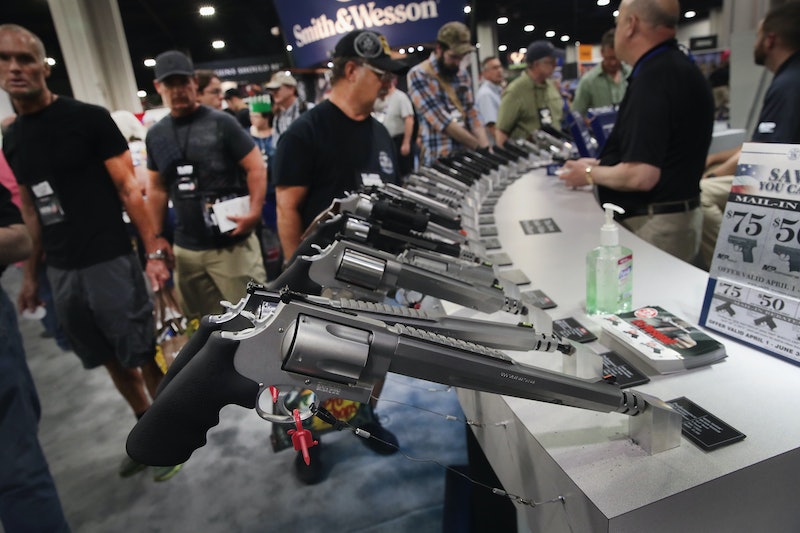 In the wake of the Parkland shooting, Congress took a baby step forward in the fight against gun violence: It slipped a single sentence into a $1.3 trillion spending package that clarified the Centers for Disease Control and Prevention did have the authority to research gun violence. Yet the agency doesn't appear to have begun studying the problem further since Congress gave them the go ahead in March. The man who once led gun violence research at the CDC tells Bustle the agency is likely waiting for a brighter green light from Congress — one that comes in the form of cold, hard cash.

"The directors of the CDC look to Congress for a signal that it's all right to restart the research," Mark Rosenberg, who headed up firearms research at the CDC's National Center for Injury Prevention and Control (NCIPC) in the '90s, tells Bustle. "That signal will be an appropriation."

The CDC hasn't elaborated on why they've yet to dig into research on what causes gun violence and how it can be prevented. In fact, it appears the agency is sitting on its heels despite Congress' clarification. "[The] CDC awaits further guidance and direction from Congress and the Department of Health and Human Services," a spokeswoman from the CDC tells Bustle. "Based on the language in the FY 2018 appropriation, we are assessing options."

Rosenberg says the CDC has a good reason for waiting for an appropriation: They don't want to jeopardize their core budget. And if history is any indication, that fear wouldn't be unfounded. When the CDC first dove into gun violence research in 1990s, they found evidence to refute the National Rifle Association's claim that having a gun in the home made Americans safer. The NRA was not happy about that finding, and it accused the agency of seeking to advocate for gun control. Then in 1996, it pressured Congress to pass the Dickey Amendment, which prohibited the CDC from using any funds to "advocate or promote gun control."

Rosenberg, who was working for the CDC when the Dickey Amendment passed, is quick to stress there's nothing in that measure that prohibited the agency from doing research on gun violence — something the CDC also tells Bustle. But he says it did end up having a chilling effect on gun research at the agency.

"The Dickey Amendment was a threat," he says. "It was a shot across the bow and what it said to researchers and to government administrators was, 'If you do this research we can make your life miserable.'"

Research on firearms at the CDC fell by more than 90 percent after the Dickey Amendment was passed, according to Rosenberg. So even though Congress has used its omnibus spending package to clarify that the CDC "has the authority to conduct research on the causes of gun violence," Rosenberg says the agency is likely looking for lawmakers to set aside funding for such research before moving forward.

That funding might not be too far away. Some lawmakers seem eager to get the CDC the financial resources it needs to tackle gun violence research as soon as possible.

"Gun violence is a public health crisis and we need our nation's best public health researchers to help us find ways to reduce it," U.S. Rep. Carolyn Maloney tells Bustle in a statement. "Three months ago, Secretary Azar said he supported such research, but we have heard nothing from him since. By authorizing funds specifically for this vital research, Congress would take a vital step in ensuring this life-saving research is conducted."

There's no quick fix when it comes to preventing gun violence and gun-related deaths. But no matter where your opinion falls in the gun control debate, there's one thing most people can agree on: We need answers to the questions of what causes gun violence, how it can be prevented, and who's most at risk. Rosenberg, at least, is hopeful that researchers will eventually be able to tackle that challenge.

"The Dickey Amendment used to be an obstacle, but now it's become a bridge to the bipartisan coalition that's needed to get the appropriation," he tells Bustle.