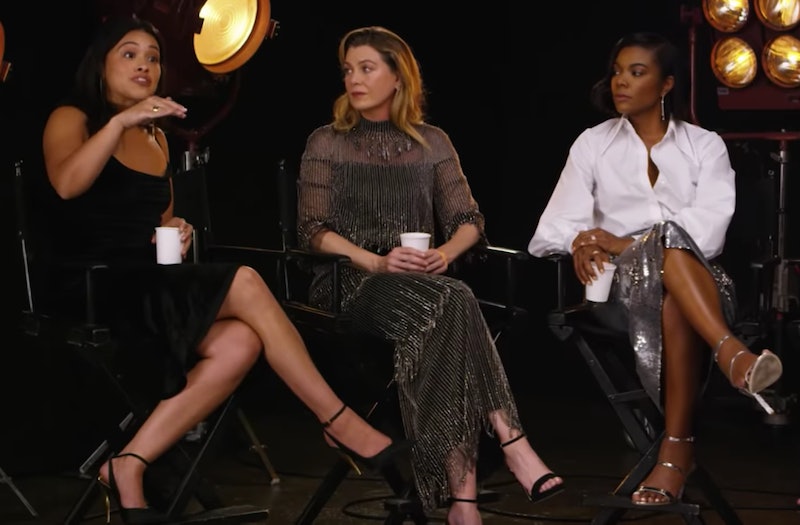 On Monday, a clip of Ellen Pompeo calling out the crew on a set of a panel about women in TV for lacking diversity went viral. Pompeo, along with Gina Rodriguez, Gabrielle Union, and Emma Roberts, all sat down for a roundtable chat following a photoshoot for Net-A-Porter's magazine, Porter, which featured the actors for its third annual Women in Television issue. People all over Twitter shared their thoughts about the Grey's Anatomy star's statement that she "didn’t see enough color when I walked in the room today." But the viral clip doesn't show why Ellen Pompeo was a great example of what it is to be an ally — that came after her call for diversity.

It certainly was a show of true allyship when, having listened and spoken about pay inequality in Hollywood for over 15 minutes, Pompeo spoke directly to the film crew in the room and shared that she felt it lacked racial diversity. The clip that sent Twitter users into a tizzy showed Pompeo using her privilege to address something that easily could have gone unchecked. Pompeo said,

"I think it’s up to all productions to make sure that your crew looks like the world we see. As Caucasian people, it’s our job. It’s our task, it’s our responsibility to make sure we speak up in every single room we walk into [and say] that this is not ok and that we can all do better. It’s our job. We’ve created the problem."

The public discourse about what white people can and should do to help people who are of marginalized identities has increased substantially over the past few years, but it's rare that everyone gets to see what being an ally really means in action, and Twitter took notice.

There's no doubt that Pompeo showed the public what it looks like to be an ally during the discussion, titled "The Big Television Debate." But she wasn't the only person at the panel who made brave and important statements about inclusion of racial minorities on film sets that day.

Following Pompeo's plea for greater inclusion of racial diversity in addition to gender inclusion, Rodriguez shared that she typically doesn't feel the comfort that Pompeo demonstrated in addressing production companies that aren't her own — but she's working on it. "The 'they' was never a person of color," Rodriguez said, when describing Hollywood's lack of diversity. She continued, "[So] I said that in my projects, the 'they' would be, so I started my company solely because that's the only place where I know I can control." At that point, Pompeo started crying, and Rodriquez continued, "For me that's the space where I feel courage to speak up. And until I get more courage, and until I learn how to speak like Ellen does in those [other] spaces, I will make sure my projects have that."

Union, who recently started her own Sony-signed production company, per Porter, then jumped into the conversation. "I just did not have the bravery to say it or call a thing a thing," Union said. Pompeo cut in, "That's why it's our job." Union clarified, "There's a part of me that felt lucky to be here," to which Rodriguez responded, "Hundred percent girl, hundred percent!" Union continued to share her own feelings then, about her concerns with the Porter photoshoot, which even brought up another important issue: the Women in Television photoshoot was conducted by a male photographer, Matthew Sprout. Union recalled,

"I did say something to my own crew, like 'I wonder what it would've been like if it was a female photographer, just curious what that might've looked like because it's about female empowerment.' But I never, never would've thought to say it in this space because I don't want to appear ungrateful... or the ungrateful brown person."

Pompeo's brave initiation of calling out the actual film crew that she'd been looking at may have seemed like the end of the conversation based on that viral clip, but it was really just the beginning. And, as great as it is to see the way that the Grey's star has received an outpouring of support on Twitter for saying what is all to often accepted with silence — at least on camera and on the spot — Union and Rodriguez deserve the same treatment for their own bravery in sharing why they don't feel comfortable doing what Pompeo did.

After the Porter panel was published on Nov. 16 by Net-A-Porter, Pompeo shared the printed interview on Twitter, saying, "So grateful to be a part of this discussion. It was a day I’ll never forget. Honored to be in the company of these women." Pompeo did not comment on her emboldened speech at the panel after it went viral in the following next few days, but Union urged her followers to watch the entire panel, not just the viral clip.

During the last 10 minutes or so of the Women in TV panel, so much more happened than just Pompeo's suggestion that Porter add more "color" to their production crews. Rodriguez shared enlightening information about how advisors in Hollywood had told her that "The Latinx community is risk averse," since they "already buy things," and Union revealed that she'd followed Rodriguez's lead in creating her own studio.

It's definitely worth watching the full panel, so you can witness both the brilliant conversation that led to Pompeo's viral statements, and the even more brilliant conversation that followed. And Pompeo did the best thing she could have done by sitting back and letting Rodriquez and Union share their experiences after she'd shared her own thoughts, too. The full interview really is a masterclass in how white people can improve discussions about diversity by opening the door for people of marginalized groups to share their experiences and opinions in a form in which they don't often have the privilege to do.

So yes, please celebrate Pompeo's surprising mid-panel confrontation — it really isn't every day that you watch a white, wealthy person use their power to hold people accountable for their actions in the moment. But it's equally important that everyone hears what Rodriguez and Union said in the interview, and celebrate how they use their own platforms to foster diversity.

As far as what white people can do to create change, addressing racial inequalities in each room we step into is just the beginning.

More like this
At 28, Melanie C Was Falling In Love & Reclaiming Her Confidence
By Olivia-Anne Cleary
Who’s The Richest 'Grey’s Anatomy' Star? See The Net Worth Of Each Cast Member
By Hugh McIntyre
Dan Levy Appears In The Latest Teaser For The Weeknd's HBO Series, 'The Idol'
By Jake Viswanath
9 Movies & TV Shows That Prove Stanley Tucci Elevates Everything He’s In
By Jake Viswanath and Radhika Menon
Get Even More From Bustle — Sign Up For The Newsletter