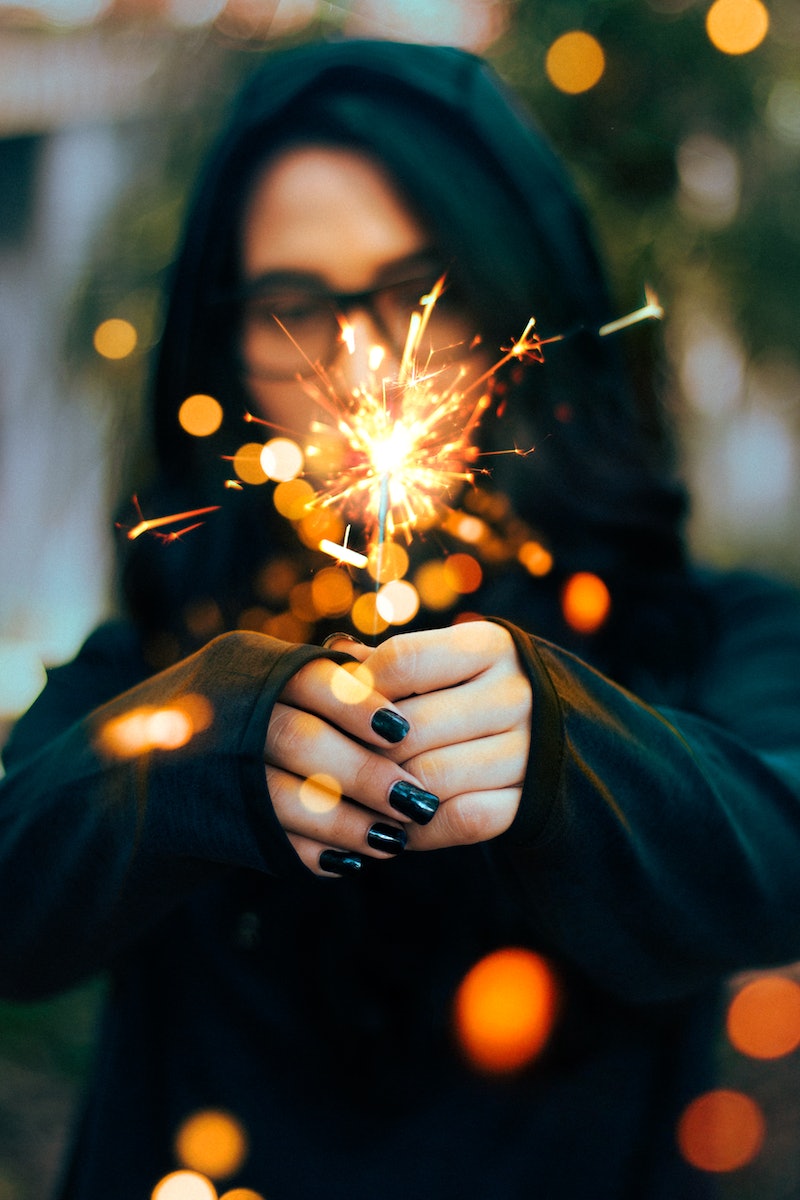 I am going to share a pretty unpopular opinion: I am not a fan of Halloween. I know some folks who meticulously count the days to Hallow’s Eve or plan their costumes for months, but as a mentally ill person, I find the holiday anxiety-provoking. In many ways, Halloween-themed activities trigger my PTSD, and create shame around my mental health issues, and I'm not alone. When you have a mental illness, celebrating Halloween can be a major trigger. Bustle spoke to millennials about how they cope when this time of year triggers anxiety or other responses, and how people without mental illness can be mindful of those triggers.

If you live without mental illness, you may be thinking this is all in my head. And guess what? You’re totally right — it is, indeed, all in my head — but that does not make my mental illness any less valid. Mental illness can alter the size of different areas in your brain, including the amygdala. According to Psychology Today, the amygdala works as “an 'emotion storing’ brain region that is often associated with primal fear-based responses such as automatically jumping or shrieking if you mistake a garden hose in your backyard for a snake.” Conclusively, if this part of your brain doesn’t function as it is supposed to, it’s no surprise that graphic horror movies or haunted houses could induce a panic attack. Additionally, mental illness can cause emotional dysregulation and change the chemical responses in one’s brain. Therefore, mentally ill people process stressful experiences (i.e., a haunted house or cornfield maze) in a vastly different way when compared to someone without a mental illness. Your mentally ill friend who does not want to participate in Halloween festivities is not “weak” or “faking it." They just have a different experience than you.

Triggers often are misconstrued as weakness or a choice, no thanks to political commentators like Tomi Lahren who appropriated the term to use as an insult. The politicization of the word “triggered” reinforces negative stigmas about mental illness, and may even stop folks from seeking the support or treatment they need. Kim, an activist with Utahns Speak Out, tells Bustle, "An ex thought it would be fun to see The Texas Chainsaw Massacre remake when it came out, and I tried, but ended up having to close my eyes and cover my ears for 99% of the movie.” She adds that she was "fighting back tears because I didn’t want to be the loser who cries during a Texas Chainsaw movie.” Unfortunately, Kim’s experience is not unique, as it reflects the pressure (aka, internalized ableism) so many of us who struggle with mental health issues feel. Before I understood my own mental illness, I strived to be the “good” mentally ill person, meaning I basically kept my diagnosis secret, and didn't ask for external support. Often times, I refused to advocate for myself, my needs, and my limitations, which is so crucial to do.

Some aspects of Halloween may also play into harmful tropes about mental health disorders, which in turn negatively impact mentally ill people, and skew public perception of what mental illness is actually like. A 27-year-old woman, who requested to remain anonymous, tells Bustle, “I can't handle watching horror movies with the setting or plot line regarding a mental hospital or mental illness. It's too triggering to have such negative stereotypes and violence/danger associated with mental illness,” adding, “I'm not evil because I have bipolar disorder, and movies with [plot lines about mental hospitals and mental illness] can communicate that people with mental health struggles are evil. It can be very damaging.”

Not only do asylum-themed haunted houses further stigmatize mentally ill people, but they draw inspiration from a painful history. “Some of the things that happened in [mental institutions] not so far in the past were beyond barbaric and disturbing, especially to women and LGBTQ+ people,” says Anna, a store manager, who consequently fears "being locked away and stripped of my freedom because people don't understand [my mental illness].” Mental illness is not a prop, and when haunted houses feature mental institutions, they make light of a not-so-distant past that brutalized mentally ill women, or women who simply defied assigned gender roles.

While many folks with mental health issues actively avoid Halloween-themed activities, there are quite a few who actually find horror movies and haunted houses to be therapeutic. “I have pretty severe PTSD and, strangely enough, all the horror actually really makes me feel better,” says Blue, a high school senior. “[Horror movies] remind me that fear is normal and everyone feels it. And it re-associates the feelings of fear with supernatural things that will never actually happen, instead of my past.” Dr. Mathias Clasen, from Aarhus University in Denmark, told Broadly that “The [horror] genre allows us to voluntarily — and under controlled circumstances — get experience with negative emotion." In a way, horror can help some mentally ill people reprocess, or even recover from fear or trauma in a safe, controlled environment. This method of coping is definitely not for everyone, myself included, and probably is a choice best decided between one and their support system.

So, how can you better support your mentally ill friends around Halloween? The first steps are to simply listen, empathize, and validate them. If you go to a Halloween-themed event with a friend who starts to panic, show support — not frustration. Nicole, a college student and healthcare professional, tells Bustle, “I wish there was a way to hide horror movie ads on Facebook and Pandora. It's very anxiety provoking for me.” Her suggestion to nest or block content is such a small request, but it could keep many mentally ill people from feeling overwhelmed, or even stop a panic attack from happening before it even begins.

I'm definitely not asking those who are Halloween-obsessed to not enjoy or participate in Halloween (seriously, go wild!), but I’m requesting that you think of those around you who may have a different perception of the creepy holiday than you do. Respect that for many people with mental illness, Halloween can serve to trigger our mental health issues, further stigmatize us, and set mental health advocacy back. And that's scarier than any demon, ghost, or ghoul.