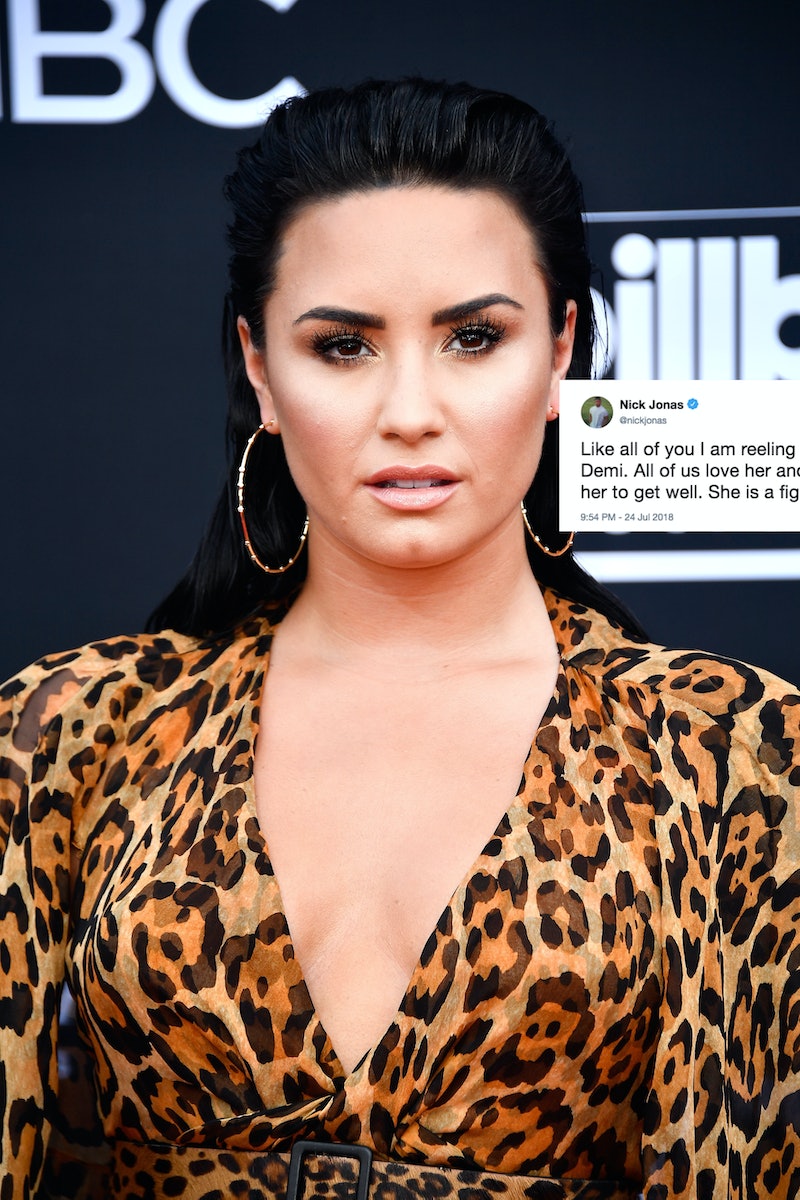 On Tuesday, July 24, TMZ reported that Demi Lovato was hospitalized for an apparent overdose after being transported from her home in Hollywood Hills. Although no concrete details about what happened have been released just yet, there's already been an outpouring of support for her from fans and even other celebrities who have felt touched by her story. In fact, a lot of celebrities have tweeted in support of Lovato, which just goes to show how loved she truly is.

Later in the day on Tuesday, Lovato's rep released a statement to Bustle confirming that she is "awake and with her family." The statement read:

As the statement points out, there has been a lot of speculation about Lovato's condition, but there's also been a lot of support for her. So many celebs, whether they have a personal relationship with her or not, have come forward to share their support on Twitter, and it's heartwarming to see how much love there is for her out there. Then again, it's not surprising, because after Lovato has spent so much of her career being open about her addiction and mental health, she's definitely been able to touch a lot of lives.

Ellen DeGeneres was one of the first to share a message of support to Lovato, as she often does for celebrities she's had the chance to meet on her show.

Many of Lovato's fellow female artists also chimed in, including Cardi B, Kesha, and Dua Lipa.

And so did Kim Kardashian:

And before you ask, of course Nick, Kevin, and Joe Jonas also offered up their support. Considering their long history as friends since the worked together on the Disney Channel original movie, Camp Rock (and Lovato's short-lived relationship with Joe), it's no surprise that they would also want to extend their love to her at a time like this.

Riverdale star Lili Reinhart also opened up about how she looked up to Lovato when she was younger and struggling with her own mental health:

And Halsey also shared her own message about how brave she thinks Lovato is and asking people to respect her privacy:

Whenever Lovato does return to social media, there will be plenty of sweet messages waiting for her, and hopefully that will make her recovery just a little bit easier.

While it's understandably a difficult time for Lovato and her loved ones, it's clear that she has plenty of people standing behind her for whatever comes next, no matter what she's going through. Here's hoping for a speedy recovery and a new update soon.

More like this
What Demi Lovato Really Thinks About Child Stardom, Depression, & Sobriety
By Radhika Menon
The Bling Ring's Alexis Neiers Has Come A Long Way Since Her 'Pretty Wild' Days
By Sophie McEvoy and Arya Roshanian
Kim Kardashian Reveals Her Response To Kanye’s Fashion Opinions
By Jake Viswanath
Molly-Mae & Tommy Fury Shared The Cutest Gender Reveal Video
By Sophie McEvoy and Sam Ramsden
Get Even More From Bustle — Sign Up For The Newsletter