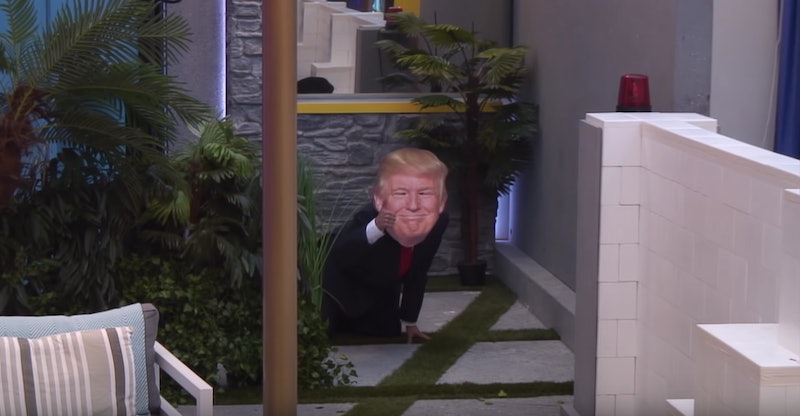 The Big Brother franchise has taken its share of heat over the years, but this newest controversy is a real doozy: Celebrity Big Brother did a border wall parody for a recent challenge, and fans are extremely unhappy about it. Many viewers of the Celebrity Big Brother UK challenge felt that the Aug. 17 broadcast made light of a serious issue, and they haven't been shy about sharing those concerns on social media.

But unless you live in the U.K., you're unlikely to have seen the episode in question, so let's catch everybody up. This season of the Channel 5 reality show has a presidential theme, because up until the very last minute, Stormy Daniels had been promised as a contestant. But after the adult film actress backed out day-of, it was too late to make any changes to the format. Thus, Season 22 would go on with a White House lawn set, including a replica of the storied building, and presumably, more themed challenges like the one that caused such controversy on Friday.

Kirstie Alley had been elected President of the House during the premiere, and during Episode 2, she announced the first challenge. Speaking from a podium designed to look like one from the White House's press briefing room, and in a style parodying Donald Trump, the former Cheers actor explained:

"As your President, I take the security of the Big Brother house and protecting its borders from the outside world very seriously. We have just received a special intelligence that indicates several powerful outsiders are plotting to cross the Big Brother border and infiltrate the house in order to steal Big Brother's green cards. It is my Presidential Order that we build a wall, a great great wall. The greatest wall the world has ever seen."

The House Guests were then instructed to build a wall spanning the garden, which displayed the American flag along one face when completed. They then donned military green uniforms embroidered with the words "BB Border Patrol", and, armed with megaphones, sat back to monitor the wall for intruders hoping to snag one of the "green cards" positioned on a table in the center of the lawn. Throughout the evening, various members of production costumed as Donald and Melania Trump and Britain's Queen Elizabeth broke through the wall attempting to take cards.

It was clearly intended to be a comedic take on a global issue, but many felt that immigration was too fraught a topic to be mined for laughs in this way. Particularly in light of the separation of families at the border between the United States and Mexico, some viewers felt that the challenge was in poor taste.

But the widespread outrage wasn't limited to the viewers alone; even one of the challenge's own participants refused to engage in the challenge. According to BuzzFeed, even some of CBB's own House Guests were opposed to the challenge. Former Bad Girls Club reality star Natalie Nunn reportedly told cameras, "this is not OK," and added, "It's so disgusting for me."

She's certainly not alone in that conclusion, and with the show just two episodes into the season and already facing this much controversy, it remains to be seen whether the series will pivot its theme going forward.