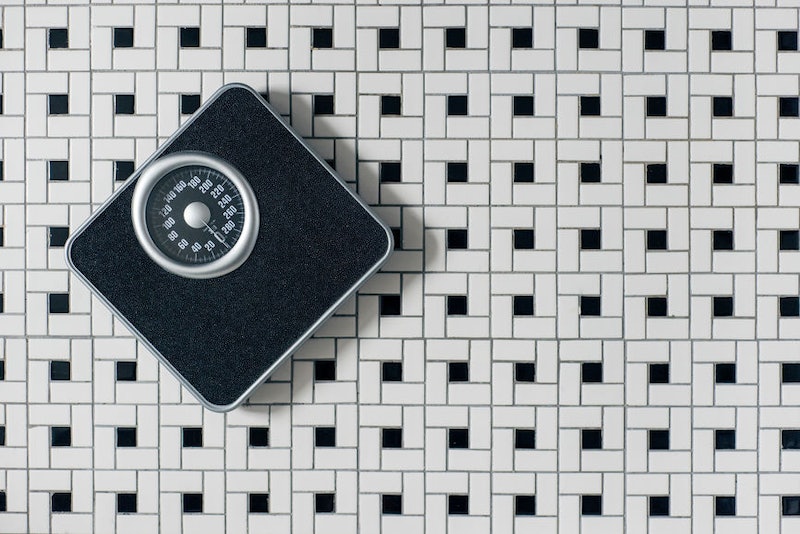 Society has a weight problem. Rather than accepting — and even celebrating — the number on the scales, the media encourages the general population to discuss weight in terms of its loss and gain. But unlike gaining money, friends, or clients, gaining weight isn't viewed favourably. So it's not surprising that new research by Canada's McGill University has found that celebrity fat-shaming impacts women's weight attitudes. The effects, however, could be more damaging than previously thought.

Between 2004 and 2015, participants of Project Implicit completed an online Weight Implicit Association Test. Researchers took 20 examples of celebrity fat-shaming and compared women's weight-related thoughts two weeks before and two weeks after the event. Notable cases included Tyra Banks being body-shamed in 2007 and Kourtney Kardashian being chastised by former partner Scott Disick for not losing weight quickly enough after giving birth in 2014.

The test focused on implicit attitudes. These are gut reactions to whether something is good or bad. Explicit attitudes, on the other hand, are feelings that you may openly admit to and usually aim to represent you in a positive way. For example, you may instinctively think being above a certain weight is "bad" but wouldn't admit this to others.

Results — which were published in Personality and Social Psychology Bulletin — showed that celebrity fat-shaming resulted in a spike in more than 90,000 women's implicit anti-fat thinking. Implicit weight bias also showed an increase between the years of 2004 and 2015, potentially proving that weight discrimination could be getting worse.

"These cultural messages appeared to augment women's gut-level feeling that 'thin' is good and 'fat' is bad," study author Jennifer Bartz said in a statement. "These media messages can leave a private trace in peoples' minds."

Picking out celebrity "flaws" is somewhat of a hobby for certain publications, and its something celebrities (in particular, female celebrities) deal with on a regular basis.

Earlier this year, Melissa McCarthy opened up about the time she was fat-shamed by a male interviewer while promoting Bridesmaids. "He kept asking, 'Are you shocked that you actually work in this business at your tremendous size?'" she told InStyle. "I just remember all the blood drained out of me. I thought, 'With my tremendous size, I could tackle you so quickly.'"

It's a culture that feeds into the influencer market too. When Gillette reposted a photo of blogger and Youtube star Anna O'Brien in a bikini in Twitter, it was met with a deluge of body-shaming comments. The brand responded by tweeting: "Venus is committed to representing women of all shapes, sizes, and skin types because all types of beautiful skin deserve to be shown. We love Anna because she lives out loud and loves her skin no matter how the 'rules' say she should display it."

As Healthline reports, fat-shaming has been proven to be harmful in several ways. It can elevate the risk of depression and eating disorders as well as reduce self-esteem levels. Despite this, weight discrimination is still difficult to challenge. According to RightsInfo, the UK's Equality Act only applies to cases relating to things like race, gender, age, and sexual orientation. One of the only ways to legally tackle mistreatment based on weight would be to frame it as a disability.

Authors of the new study in the Personality and Social Psychology Bulletin hope to prove a definitive link between media weight discrimination and women's attitudes by carrying out lab tests. Proving that the discussion around weight is toxic may be the key to encouraging the media to change its ways. And coaxing the industry into a new era may be the answer to stopping damaging attitudes. Well, one can hope anyway.