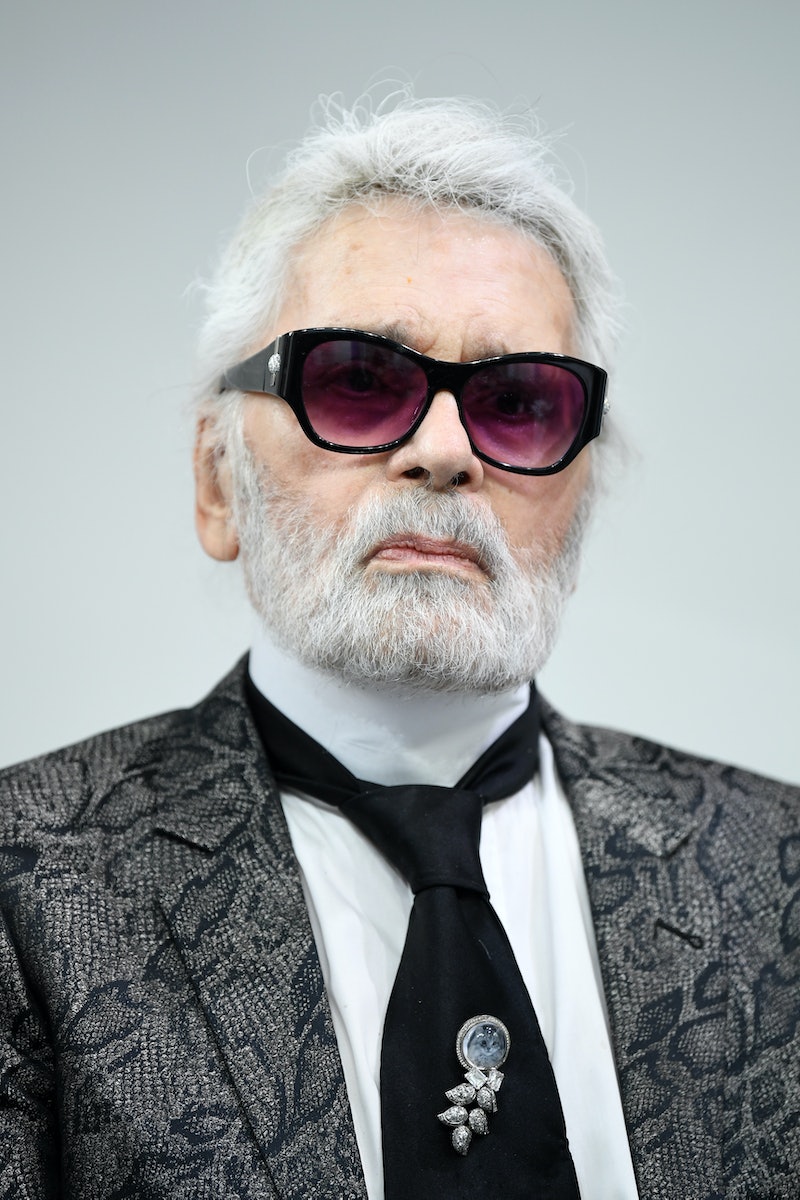 The fashion world woke up to some sad news on Tuesday morning. Designer Karl Lagerfeld has died at 85 years old, as several news outlets are reporting, although a direct cause of death has yet to be confirmed. And now that the news of his passing has been made public, celebrities and models who were close with the Chanel creative director are sharing sweet tributes and messages on social media about what Lagerfeld meant to them. His impact on the fashion world and on culture in general is a given, but so is his impact on everyone he worked with.

According to People, concern about Lagerfeld's health first began at the end of January, when he didn't attend Chanel's spring 2016 haute couture show in Paris. Now, people all over the world are heartbroken to learn of his passing, and it's not just limited to those who knew him personally. His designs and his vision have affected so many, and it's no wonder that his death has hit those who did have the opportunity to have personal relationships with him especially hard. He changed fashion forever, and that impact will felt for years to come.

Here are what celebrities are already saying about Lagerfeld and what he meant to them. This post will be updated as more tributes continue to come in.

Hadid took to her Instagram Story to share her thoughts after the news broke, writing, "I'm so heartbroken I almost don't have words... There will never be another Karl Lagerfeld. Every second with you was an honor, joy, and inspiration. I wish I could give you one last hug. I love you Karl. Thank you for everything. Rest in peace."

Beckham shared an iconic black-and-white photo of Lagerfeld on Instagram, along with a caption about what he meant to her.

"So incredibly sad to hear this. Karl was a genius and always so kind and generous to me both personally and professionally," she wrote.

Fellow designer Versace also shared her feelings about Lagerfeld on Instagram, writing, "Karl your genius touched the lives of so many, especially Gianni and I. We will never forget your incredible talent and endless inspiration. We were always learning from you."

Kruger shared the same iconic photo that Beckham did, sharing that she had hoped to introduce her daughter to Lagerfeld this week. She wrote:

"Karl.....I cannot tell you how much you meant to me and how much I will miss you. I will never forget your kindness towards me, your laughs, your imagination. I came to France to see you this week and introduce you to my daughter...I’m heartbroken I was too late. Rest In Peace, I adore you."

Hadid shared several photos of Lagerfeld on Instagram, both with her and just of him, along with a lengthy caption. She wrote:

"Nothing feels right today..at a loss for words and so heartbroken by the loss of Karl. His humor, wit , love and passion for fashion will live on forever. Thank you for the inspiration that you gave to this world and for all of the hearts that you touched in the process. Every time I saw you it felt like the first time & I will miss your hugs so much. I feel so lucky to have been in your presence. Sending my love to the Lagerfeld family and to all closest to him. I am so sorry. We all love you so much."

Jenner shared a few photos of her and daughter Kendall Jenner with Lagerfeld on Instagram, writing:

"You bought so much beauty, style and grace to this world. Karl, you will forever be a true legend, an icon, an inspiration. It was such a thrill and a pleasure to have met you, to have worked with you, and to have experienced the amazing times when you would photograph my girls for your beautiful campaigns. There will never be another like you, my dear friend, and you will be truly missed."

Lohan shared a photo of her and Lagerfeld on Instagram, simply writing, "My heart is broken. Thank you for everything."

Sharing a photo of Lagerfeld on Twitter, Banderas wrote, "Fashion world loses one of its most influential designer. Thanks for the talent."

"We lost a true legend! You were such an inspiration to the world! You shot my first fashion shoot & I was so nervous to work w such an icon! The world is so much chicer because u existed! I’m beyond honored to have had the opportunity to work w u. U are so loved & will be missed."

Hailey Bieber shared a photo of Lagerfeld on Instagram and wrote,

"today the world says goodbye to a true legend. Karl, you graced this industry with so much genius and talent that will live on forever. Thank you for the incredible legacy you leave behind.. 🖤"

The singer tweeted out a photo and heartfelt message. She wrote,

"One of the coolest moments of my career was shooting my 1st high fashion shoot with you as the photographer. Every detail mattered to you. Thank you for the inspiration you’ve given us all. You will truly be missed. Rest In Peace Legend #KarlLagerfeld #Chanel"

Miley Cyrus shared a black-and-white photo with Lagerfeld on her Instagram page, as well as on her IG Story. In the Story post, she wrote, "Karl... Always missed, never forgotten."

Lagerfeld may be gone, but he will always be remembered. His impact will be felt for years to come.