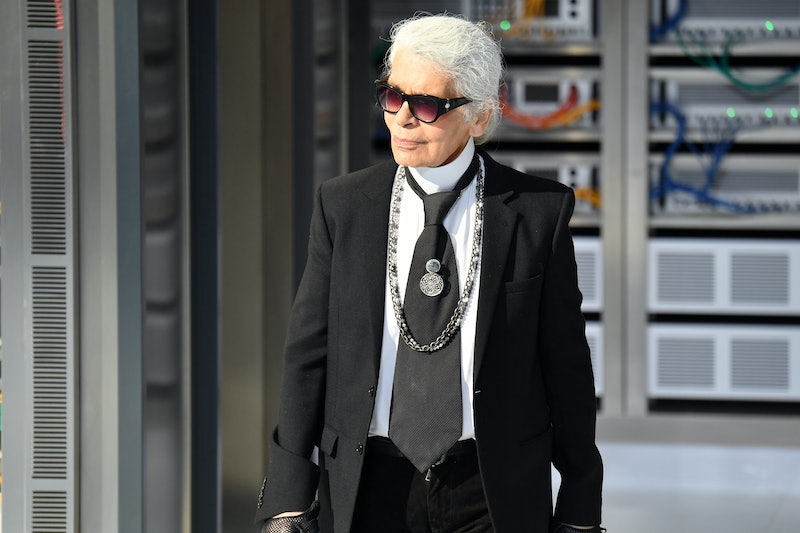 Sad news in the world of fashion today: Karl Lagerfeld has died in Paris aged 85. The announcement was made this morning by Business of Fashion, via a tweet that read: "BoF is sad to report the passing of Karl Lagerfeld." As of yet, there is little information regarding the cause of death.

BoF's tweet linked to a story profiling the designer's incomparable career and most defining moments. Reports have suggested the fashion icon has been unwell in past weeks, which may be the reason he was unable to attend three of Chanel's Haute Couture shows in January. A statement from the fashion house read: “Mr Lagerfeld, artistic director of Chanel, who was feeling tired, asked Virginie Viard, director of the creative studio of the house, to represent him.” Lagerfeld was notably absent from his final bow at the end of the shows — a moment he had previously never missed.

The designer presided over Chanel for over three decades, maintaining the brand created by Coco Chanel and taking it to new heights. His visionary genius ensured each and every Chanel show was a spectacle, with BoF noting some of his most memorable sets and inspirations:

“His fall 2017 collection featured a 115-foot-tall mechanical rocket ship that simulated blast off. For fall 2014, he built a Chanel shopping center ... For fall 2010, he imported enough snow and ice from Sweden to create a 265-ton indoor iceberg. Backdrops of a man-made beach with rippling waves (spring 2019), a scale rendering of the Eiffel Tower (fall 2017 couture), a French brasserie with uniformed bartenders (fall 2015) and an enormous model of a passenger ship (cruise 2019) suggested no idea was too fantastical, nor expense too decadent.”

Lagerfeld was instantly recognisable by his silvery white hair, which was always tied back into a ponytail and accompanied by a pair of dark sunglasses that seemingly never came off.

Although best known for his work as Artistic Director at Chanel, the designer also worked at fashion house Fendi, as well as on his namesake brand. Constantly on the go, Lagerfeld dabbled in all kinds of projects on the side, and appeared to relish his status within the fashion, media, and popular culture. Over his career, Lagerfeld designed hotel rooms, video games, and even a cosmetics line inspired by his cat Choupette, among other projects, as BoF reports. But his dedication to luxury fashion was always at the forefront.

This dedication could be seen in comments such as:

“There is no secret to life. The only secret is work. Get your act together, and also, perhaps, have a decent life. Don’t drink. Don’t smoke. Don’t take drugs. All that helps.” Anyone who would suggest retirement to him would be met with reactions such as: “Why should I stop working? If I do, I’ll die and it’ll be all finished.”

Alongside ongoing success and unprecedented respect within fashion, the designer did, at times, provoke controversy with his comments about politics and culture. In recent years, he has criticised the #MeToo movement, suggesting models who don’t want their pants pulled down should join a nunnery, the Huffington Post reports. He was also once sued by a women’s group for making body-shaming comments, according to Bust. The designer also expressed disdain towards Angela Merkel, the Independent reports, for her immigration policies.

At this moment, it is unclear who will take over Lagerfeld's position at Chanel, but there has been talk that Virginie Viard, director of the creative studio, will step in.