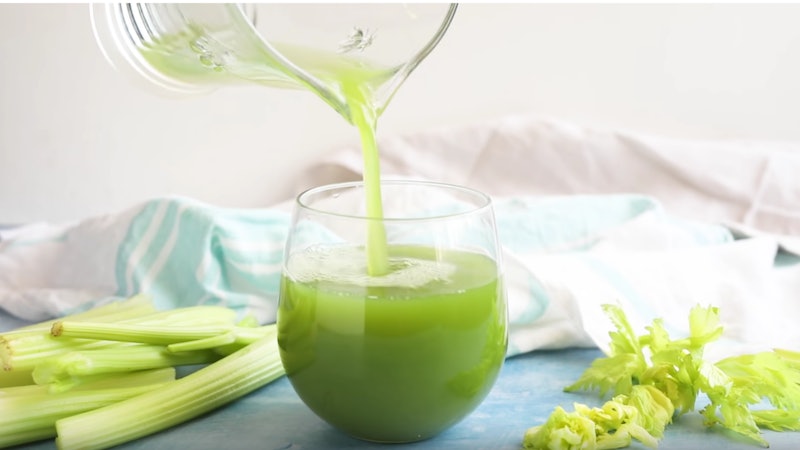 Kind of like iceberg lettuce, a lot of people think celery is a useless vegetable with no nutritional value. But, as it turns out, celery juice’s health benefits make it the perfect morning green juice, especially if you've been battling inflammation. Personally, I've long been a fan of celery. It's cheap and hydrating, which makes it not only a great snack, but a perfect addition to any smoothie. Seriously, this is one health trend that won't break the bank, and it has untold health benefits you might not be aware of. Basically, celery just might be the new superfood that everyone can afford.

"It has the power to starve viruses, mold, yeast, and unproductive bacteria that are present in the body and then flush their toxic debris from the gut,” Christine Bullock, a fitness and lifestyle expert, the co-creator of Kayo Body, and the creator of Evolution 20 & Super Shred, told Aimee Jefferson for The/Thirty. "These toxins are the root cause of inflammation, so ridding the body of these has the power to improve the elasticity of your skin, your digestion, mental acuity, immune system, and physical energy."

Celebs have been touting the benefits of celery juice for awhile, and Busy Phillips shared on Instagram Stories earlier this year that she'd added celery juice to her morning routine to "find the path to my best life and feeling good." What's more, because celery is mostly water, it's a great way to stay hydrated when you just can't stand to chug another glass of H2O.

However, if you're new to celery, start slowly to make sure you're not one of the people who get celery mouth, also known as oral allergy syndrome, a numbing feeling in the mouth after eating celery. If you don't have a just-from-the-dentist feeling after your celery test, it's time to get juicing. Anthony William, New York Times bestselling author of Medical Medium, Life-Changing Foods, Thyroid Healing, and Liver Rescue, noted on his blog that celery juice can even help people with chronic illnesses improve their health.

"I’ve seen thousands of people who suffer from chronic and mystery illness restore their health by drinking 16 ounces of celery juice daily on an empty stomach," he explained. "If you drink your celery juice first thing in the morning, it will also strengthen your digestion of foods you eat for the rest of the day." While celery is a great addition to any green juice, William noted that you'll get the greatest benefits if you drink it straight up, no chaser.

If you don't have a juicer, and spending big bucks on a fancy juice every morning isn't in your budget, William said you can still make it at home on the cheap. "You can chop the celery and blend it in a high-speed blender until smooth. Strain well and drink immediately." Not convinced? Celery-juice devotees on Twitter, like @blenderdiaries, reported improved digestion, reduced bloating, and clearer skin.

While all juicing trends should be taken with a grain of salt — celery won't solve all of your problems — this one is so easy and affordable that it's definitely worth a try. If you just can't stomach starting your day with a 16-ounce glass of celery juice, Cynthia Sass, MPH, RD., contributing nutrition editor at Health, told Food & Wine that eating these leafy green stalks can give you similar benefits.

"Many people think of celery as a throw-away veggie with no nutritional value. But it actually packs some key health protective nutrients. In addition to being low in calories and a source of fiber, celery provides some folate, vitamin K, potassium, and antioxidants," she explained. She added that while it's all well and good to juice your celery, it's not essential to receiving the nutritional value. "You’ll get similar benefits from eating celery and plenty of other fresh veggies in a variety of ways throughout [the] day."

While everyone is different, and not every juice or veggie makes everyone feel the same, if you're hella inflamed, try embracing celery for 30 days and see if it turns out to be the miracle juice you've been after. Hey, you never know. Kale used to be nothing more than a garnish, and cauliflower was just a gross vegetable your parents made you eat as a child. It's celery's turn in the spotlight, and it's up to you to decide whether these pale green stalks are worth their weight in juice.