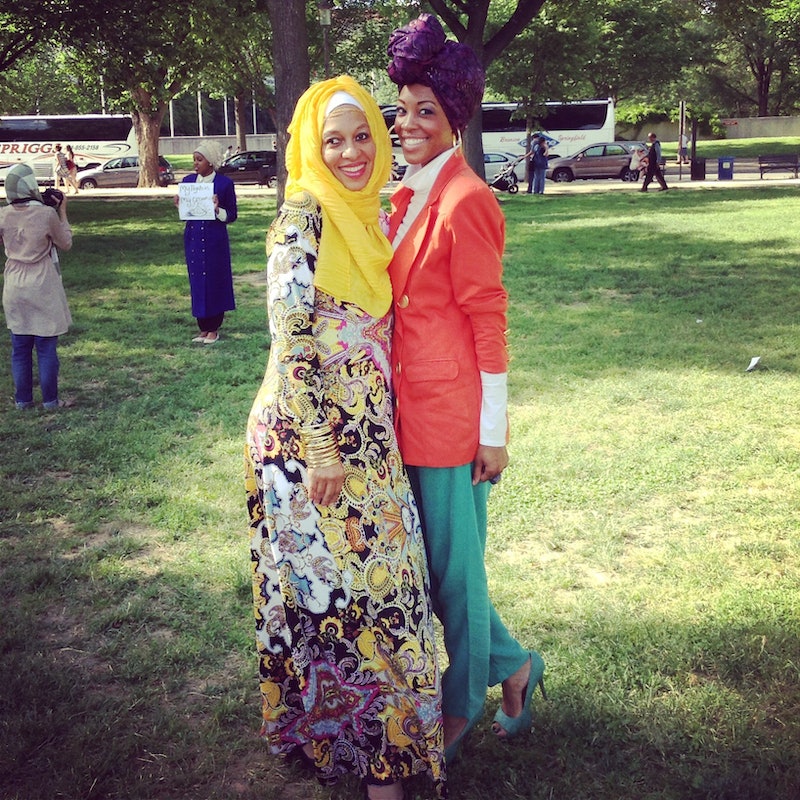 Pride in your culture can be represented in so many different ways: flying flags, speaking the language, making and eating the food — just about anything that’s can be passed down from generation to generation in hopes of preservation. Growing up, I chose to identify as “black American” in school, at work, and just about any other setting because it was the visually identifiable thing about me, despite the fact that I am actually Afro-Latinx. I never quite looked for Latinx representation, because I never embraced that side of me. In fact, I didn’t start to accept the maternal Afro-Latinx part of me until I was well into my teenage years.

The spark of pride in my Latinx identity ignited because of a song. I remember my older sister blasting it in our room when I was 16 years old. She was openly confident in speaking Spanish, when I was not. She was singing at the top of her lungs to a Latin song I had never heard before. I could tell by the sweet, raspiness of the singer’s voice that she was listening to Celia Cruz, a singer my father would play while cleaning or cooking breakfast on the weekends. I began to dance as I listened to the words , and I almost began to cry.

This song made me feel like Celia was speaking directly to my insecurity and telling me that I was more than worthy.

“La negra tiene tumbao. Y no camina de lao,” which translates to: “That black woman has tumbao. And does not walk from the side.” The word “tumbao” in Latinx culture can mean “swag,” or a sexiness. It could even be in the way you walk. The song awakened a true mission of being proud of being Latinx, despite some negative experiences along the journey to accepting my lineage. This song made me feel like Celia was speaking directly to my insecurity and telling me that I was more than worthy.

Celia Cruz, who passed away in 2003, was an international Cuban-American legend in Latin music. She celebrated her identity and was very open with accepting her visible blackness. “La Negra Tiene Tumbao” is a song that pays homage to those of us who are underrepresented and who do not pass the “paper bag test.” (The "paper bag test" is a form of racial discrimination when my black ancestors weren’t allowed in exclusive clubs or societies because their skin was darker than a paper bag.) It is an anthem that speaks of being confident and proud of who you are — “Nunca camina de lao, nunca camina de lao," the lyrics say, meaning, "she never sidesteps. Never sidesteps." — how you look, and knowing that you’re going to turn heads because of it; to keep in stride and not hide yourself.

Prior to hearing this song I was ready to hang up this part of my identity. It’s not that I hid from having Dominican blood, I just didn’t fully understand this part of myself due to generations of my mother’s side being more “Americanized” and a bit removed from traditions. We didn’t grow up making sancocho (a Latin American soup) or doing bachata (a dance) with uncles at family gatherings. My great-grandmother, who grew up in America, was white-passing and used that to help her survive ridicule, racism and prejudice during the ‘20s, when race riots and lynching were still prevalent.

I celebrated my culture in my own way by learning Spanish. I studied it in elementary and middle school, but by the time I graduated high school, I was speaking it as often as I could. (Although, it is another language inflicted on African slaves by colonizers, it was still something that would connect me with “my people.”) But, when I’d try to ask my El Salvadorian or Mexican co-workers a question en Español, I found myself interrogated for how I knew Spanish. How did I, visibly black, actually speak Spanish? It was clear that some of them had never met a black person who spoke the language.

Not having had any ties to the island, I became more insecure that the only black Dominicans existed in my family.

People would ask me who taught me Spanish whenever I said anything in the language outside of a simple “hola” or “gracias.” The question almost became a cloud over me that pushed me away from ever wanting to openly speak and accept that I belonged in the Latinx sphere. I would say that my mother was Dominican, which only prompted more questions essentially telling me I didn’t look Dominican and therefore couldn’t be.

The anti-blackness reared its ugly head too many times for me to count. And unfortunately, not having had any ties to the island, I became more insecure that the only black Dominicans existed in my family. Even though my mother and grandmother were fair-skinned, I had other uncles and aunts who were not. I knew that being black wasn't an identity only seen in America, but it still left me in a culture funk.

But when Celia sings about this black woman who has "tumbao," I find her in myself every time. I could never sidestep who I am no matter how many questions people have about me, my background, or their perception of what it was to be Latinx. I am proud of this part of me even if I don't how to make tostones, or didn't have a quinceañera. The song still acts as a driving force for when I set out to achieve a new goal and need inspiration. It is a timeless creation that I will forever be grateful for (as it help shaped) my Afro-Latinx identity.