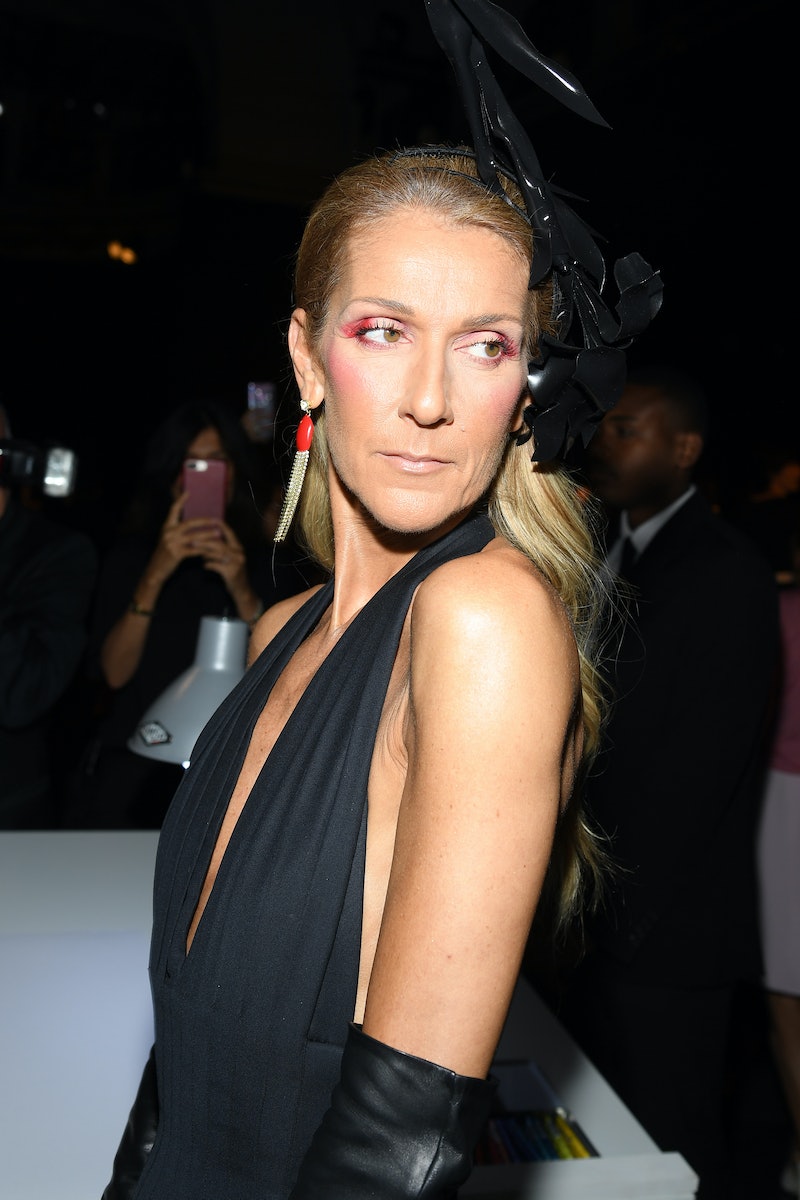 For the longest time, it was considered a faux pas to wear open-toe shoes that had too much of the insole peeking out. That just meant your shoes were too big. But as per usual, Celine Dion has shattered that fashion rule. Celine Dion wore purposefully too big shoes, and somehow made the style move look chic rather than ill-fitted.

Dion has been spotted in Paris this past week attending shows during Haute Couture Fashion Week. She wore her unexpected shoes to the Schiaparelli Fall Winter 2019 show on July 1, donning an all black look consisting of a halter midi dress and elbow-length leather gloves. While that outfit alone is an unexpected wardrobe choice for a city which is currently under a big heat wave, Dion's shoes stole the show. The block heeled, snakeskin-embossed boots featured an open-toe silhouette. But the insole extended a solid inch forward, revealing a blue design that looked like the reflected top of a pool. This made it look like Dion was walking on water, giving a whimsical touch to her monochrome look.

According to one of Dion's stylist, Pepe Muñoz, the entire look was custom Schiaparelli from head to toe. So suffice it to say, Dion was right on theme for the show.

But that wasn't Dion's only memorable fashion move this week. Dion is the unofficial star of Haute Couture Fashion Week, and she has already worn a string of showstopping looks. One of which was the transparent gown Dion wore to the Iris van Herpen Fall Winter 2019 show on July 1.

Van Herpen makes museum-worthy creations that look more like sculptures than clothes. Dion wore one of Van Herpen's 3D-printed dresses, which consisted of red and black transparent netting. The dress had a wavy texture, making it look like Dion was glitching as she walked the streets of Paris.

Another one of Dion's bold outfit choices for Haute Couture Fashion Week was mismatched shoes, a la Carrie Bradshaw. Bradshaw wore mismatched heels in in the season 3 episode "Escape From New York" where she, Samantha, and Miranda traveled to Los Angeles. Bradshaw stepped out wearing an asymmetrical ruffle dress and two different pairs of Louboutin strappy sandals.

Dion did the same this week. Sporting an '80s-inspired cropped blazer and a frilly yellow mini, Dion walked out wearing a pair of $750 mismatched heels by Jimmy Choo. The shoes perfectly coordinated with the playful outfit. One heel was black with a white pointed toe, just like Dion's blazer. And the other pump was yellow with a white pointed toe, similar to her skirt.

And if you needed more convincing that the legendary singer is the queen of Haute Couture Week, here is a photo of Dion wearing no pants while out in Paris.

From purposefully too-big shoes to mismatched heels, Dion is winning Paris this week.