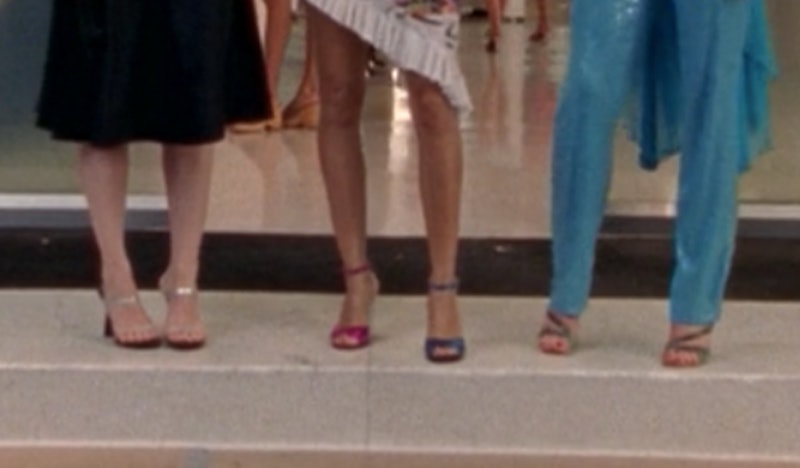 When it comes to fashionable television shows, there's no series more well known for its style than Sex and the City. From Carrie Bradshaw's iconic opening credits outfit to the character using her stove to store sweaters, the show will always be known for its fashion. Now, Carrie Bradshaw's mismatched heels from an episode in season 3 are getting a style explanation from none other than Sarah Jessica Parker herself.

According to E!, Instagram account @everyoutfitonSATC brought up the episode in one of their latest documentations of the show's style asking why Bradshaw wore a pair of mismatched heels. If you aren't familiar with the popular social media account, its purpose is to record every outfit worn in the HBO series. The latest post in question shows Bradshaw in the season 3 episode "Escape From New York" where she, Samantha, and Miranda travel to Los Angeles.

Once there, Bradshaw dons a ruffled, asymmetrical hem, floral mini dress, but it's the shoes, not the dress, that became famous. Parker's character is rocking two different pairs of Louboutin strappy sandals, one a vibrant metallic pink, the other an equally bright blue. If you're thinking that the shoes may have been the result of some behind the scenes oops, think again, because Sarah Jessica Parker is setting the record straight.

Parker clearly saw the post by Every Outfit on Sex and the City and took it upon herself to let the world know exactly why her well-known fashionista character would wear two different pairs of shoes.

While memorable, the non-matching Louboutin sandals are far from the only iconic shoe moment on the series. In fact, in the same season, Parker's Bradshaw is memorably "shoe shamed."

At a party, Bradshaw is asked to remove her shoes before entering a party. Fast forward and someone else has taken her $485 pair of Manolo Blaknik heels. Clearly, Bradshaw would want them back, but upon returning to the home of her friend, she's blamed for her "extravagant lifestyle" and shamed for her love of shoes. Don't worry, ultimately, Bradshaw is bought a new pair of the heels after declaring she's marrying herself and registered at the luxury shoe designer. All's well that end's well, right?

Parker's response to the Louboutin mystery post from Every Outfit on Sex and the City proves that no matter how long it has been since the classic television show aired, it still takes up space in the minds of the television and fashion obsessed. From Carrie Bradshaw's non-matching sandals to her obsession with clothes, that's the power of style, a lingering memory of iconic fashion moments.