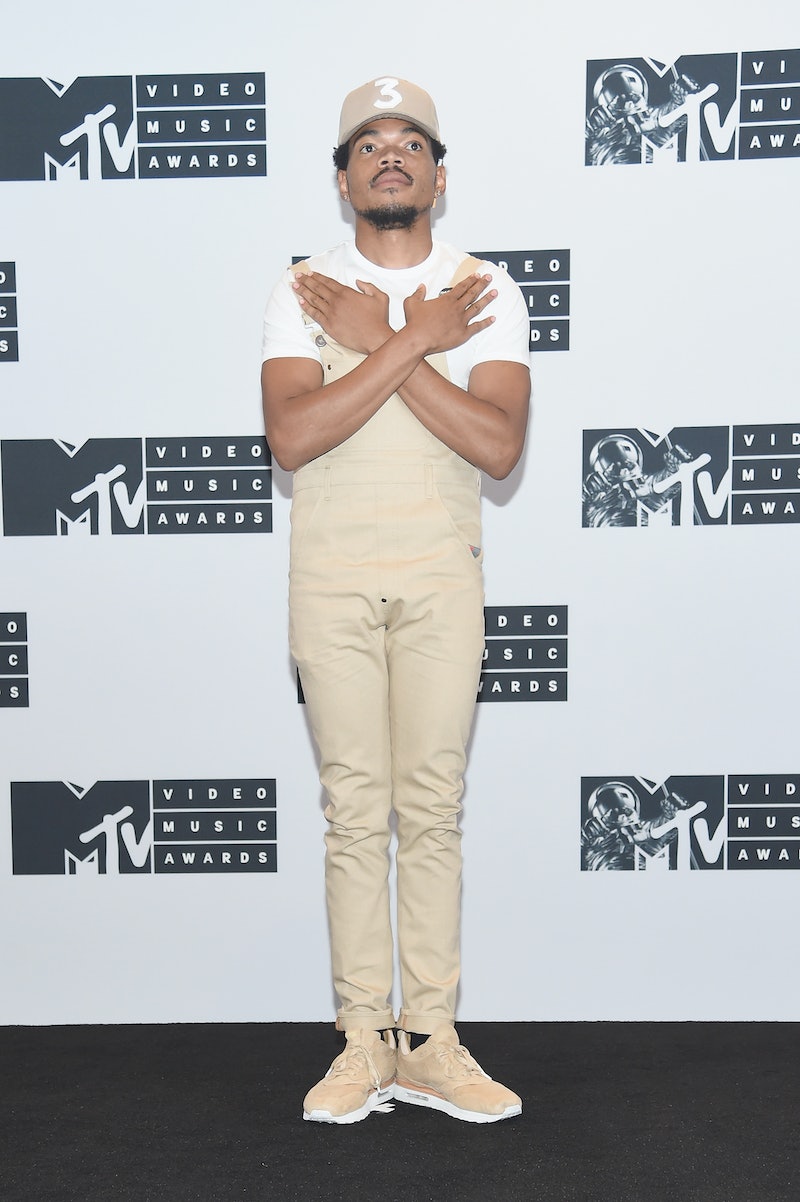 After catching a glimpse of the brand new video for his latest single, I took the time to actually explore Chance The Rapper's "Same Drugs" lyrics. There's no doubt that Chance's live-stream only album, Coloring Book, was one of the best albums of 2016. It was nominated for an impressive seven Grammy awards, after all. As a fan, I'd have to say that "Same Drugs" is definitely one of the stand out singles on the critically-acclaimed project. And although it may sound like it's laced with narcotic references, you'll be surprised to know that, despite the title, the track is actually not about drugs at all — just as Chance once pointed out in a tweet.

It turns out, in fact, that the song is actually about love — or love lost, that is — and "drugs" is simply just a metaphor that symbolizes the many major changes that have taken place in a relationship during the rapper's past.

In the melody, Chance explains that he and his old bae are no longer on the same journey (or "same drugs"), as they've grown apart, and their interests have shifted. The lyrics to the chorus are Chance's ode to that change:

We don't do the same drugs no more

'Cause she don't do the same drugs no more

So, I've gathered that "we don't do the same drugs" basically equals "we're not on the same page."

In the first verse, Lil Chano seems to make reference to the fairytale, Peter and Wendy. And it sounds like he's attempting to share parallels between his failed relationship to that of Peter Pan and Wendy's in the J. M. Barrie play, in which Wendy ultimately jilts Peter and their free-spirited lifestyle, opting to return home to her mother, while Peter remains steadfast in his ideals of never growing up.

Who knew that Chance was so well versed in Peter Pan knowledge? Sounds similar to another musical genius some of you may be familiar with: Michael Jackson.

When did you change?

I thought you'd never grow up

A shadow of what I once was

During the second verse, it seems that Chance and his former flame, may have discussed reconciliation, at least in friendship, but neither have actually made good on their promises to stay in touch. He expresses feeling of not being good enough for her "perfectness," and alleges that she used him just to get through the youthful phase in her life.

Referring to her as a "stranger," he begins to wonder if she too misses their days of being young, wild, and free. He also questions her reasons for changing, while at the same time mentioning that he may have actually been the one to blame, revealing that he was "too late."

I don't know about you, but it sounds like Chance is looking for a second chance. Hinting at some major changes that he's made since their split, Chance reveals that he's not the same person that he used to be and calls himself "a shadow of what I once was."

Where did you go?

Why would you stay?

You must have lost your marbles

You always were so forgetful

In a hurry, don't wait up

A shadow of what I once was

'Cause we don't, we don't do what we say we're gonna

You were always perfect, and I was only practice

Don't you miss the days, stranger?

Don't you miss the days?

Don't you miss the danger?

By the outro, Chance begins to question why things changed, pointing out some of the physical changes that have taken place in his former love since their days of "kids being kids."

Why did you stop?

What did you do to your hair?

Where did you go to end up right back here?

When did you start to forget how to fly?

And later goes on to expresses his thoughts on his ex, and people in general, staying "in line" and being true to who they are in life.

Don't you color out

Don't you bleed on out, oh

So insightful, right? Chance openly revealed in his Reddit AMA, that “Same Drugs” was the hardest song to write on his Coloring Book mixtape and know I can totally understand why. It's actually much deeper than it appears on the surface.