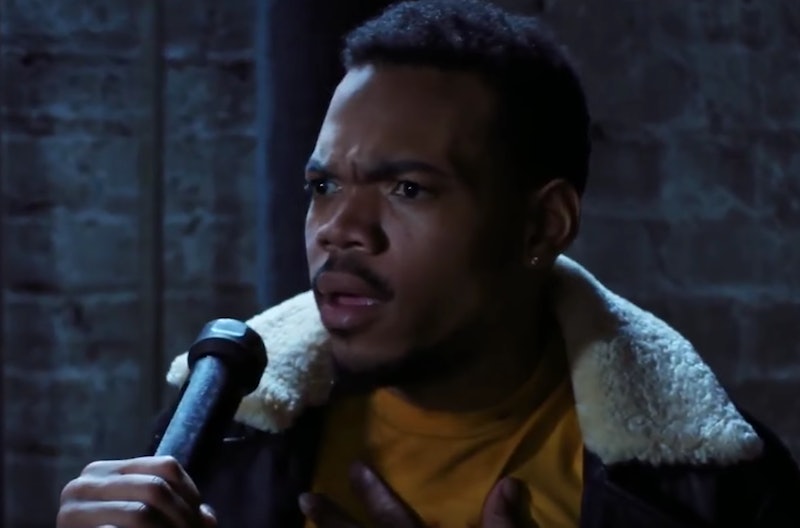 If you've ever wanted to see Chance the Rapper act in the role of a pizza delivery boy/werewolf combo, you're in luck, because that's exactly what happens in the upcoming movie Slice. The first trailer for Chance the Rapper's horror flick dropped on Tuesday morning, and just like with a pizza, you'll want to get it while its hot. The story seems pretty simple: a werewolf named Dax Lycander (Chance) delivers pizzas from a restaurant that happens to to be located on top of the gateway to hell.

Wait a second, is this about "pizzagate?" As of now, it's unclear if the 2016 conspiracy theory regarding a D.C. pizza shop had anything to do with Slice, but it's hard not to draw a comparison. Unlike the heavily fabricated conspiracy surrounding the D.C. pizzeria though, Slice seems like it's made all in good fun, at least that's how the trailer frames it. In the first glimpse at Slice, a graphic lists off the components of the movie as if they're chosen toppings for a pizza. "Evil, Mystery, Scooters, Betrayal, Murder, Sneakers," are all checked off, so fans know what to expect when Slice is finally delivered to theaters.

While you don't actually get to see much of Dax Lycander in the one-and-a-half minute clip, there is a particularly charming moment towards the end of the trailer when the Chicago-born rapper is spooked out by Zazie Beetz's character sneaking up on him. It's definitely a comedy-horror movie if you've ever seen one.

Just after one watch of the trailer for Slice, which doesn't have a set release date yet, you can tell it's going to be an instant cult-classic. It definitely has a similar vibe to contemporary nostalgic horror movies and shows like Stranger Things — it even features the Stranger Things actor, Joe Keery, who plays Steve Harrington. Between Keery's role and Beetz's character's red shiny bomber jacket — that hilariously says "Relax, it's perfect pizza" on the back of it — Slice definitely seems to embrace the '80s vibes.

The '80s also saw the release of Michael Jackson's "Thriller" video and Teen Wolf, both of which heavily featured werewolves, like Slice. If Chance's new horror flick doesn't somehow incorporate "Thriller," it would be a shock, and who better to pay tribute than Chance the Rapper?

Earlier in August, the Coloring Book rapper teased Slice in a tweet that said simply, "It's coming." The tweet hilariously included an illustration that looks like the Little Caesars' logo, but with a gory twist.

That first illustration fits the theme of Slice, which even shows a pizza delivery boy's throat getting slashed in the first moments of the trailer. A few days later, he posted another Slice announcement which said, "No but like it’s really coming. Soon." That tweet included a picture of the Dominoes logo with drops of blood added for spooky effect.

As if the edited pizza brands' photos don't indicate how darkly funny Slice might be, just look at the rest of its cast, which includes comedians Hannibal Buress and Paul Scheer. And you already know from Zazie Beetz's performance in Deadpool 2 that she's a comedic genius. As spooky as Slice might seem, it will probably humor you as much as it does scare you.

More like this
Taylor Swift Wanted To Be In 'Twilight: New Moon,' According To Its Director
By Grace Wehniainen
Jonah Hill Explains How His Anxiety Attacks Will Change The Rest Of His Career
By Grace Wehniainen
Here’s Where Manti Te’o Is Now
By Arya Roshanian
Florence Pugh Won’t Discuss Harry Styles Sex Scenes In 'Don’t Worry Darling'
By Grace Wehniainen
Get Even More From Bustle — Sign Up For The Newsletter