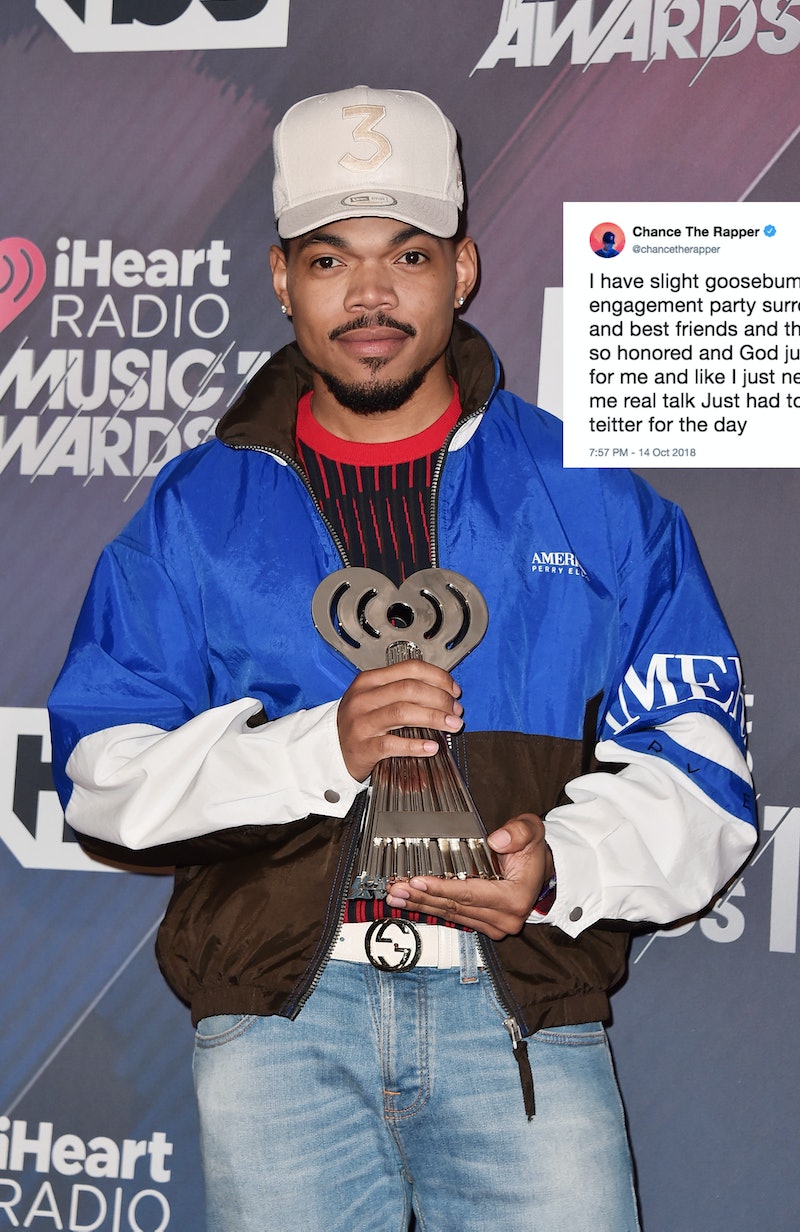 It's never too soon to start preparing for wedding season. On Sunday, Chance the Rapper tweeted about his engagement party, and the post shows just how excited he is to get married. In July, Chance proposed to his longtime girlfriend Kirsten Corley, and it sounds like the couple are beginning official wedding preparations.

On Twitter, the rapper reflected on how grateful he was during the party. He wrote,

"I have slight goosebumps. I’m at MY engagement party surrounded by my family and best friends and the woman I need. I feel so honored and God just real talk has a plan for me and like I just needed to let him guide me real talk Just had to share that, done wit teitter [sic] for the day."

The engagement party rounded off an already eventful week for the rapper, who disguised himself as a Lyft driver and picked up passengers in Chicago, according to People. The stunt was meant to surprise fans at the end of their ride, and to start a conversation about how to support Chicago Public Schools through his organization SocialWorks' New Chance Fund. The rapper, whose hometown is in Chicago, has spearheaded several initiatives to support the city's public schools.

However, Chance also took a time out to celebrate his engagement with friends and family, and it sounds like the event was surreal for the artist.

Chance posted about the party on Instagram as well, sharing a picture of himself holding hands with Corley. While the post coincided with the engagement party, the picture was actually a throwback snap from the Ralph Lauren 50th Anniversary party. In the picture, Corley shows off the engagement ring, caption read "bride to be," using the bride emoji.

The couple has been dating for several years, and were first connected in 2013. In 2015, they welcomed their daughter Kensli Bennett, who is their first child. According to People, the couple separated for a brief time in 2016, but reconciled a year later. Chance proposed to Corley on the 4th of July. His brother, Taylor Bennett, posted a video of the proposal on Instagram, and it went viral.

Not long after, the rapper confirmed the engagement on Twitter. He wrote, "She said yes," with a lock emoji.

In the past, Chance has been open about his love for his daughter and fiancé. In 2017, Chance thanked both Kensli and Corley in his Grammy acceptance speech after taking home the award for Best New Artist.

He often shares updates about his daughter, including a recent video of her dancing with Saint West. It's clear how much his family means to him, and he's never been shy about posting on Twitter and Instagram.

The rapper's recent tweet isn't his only recent social media post suggesting he's excited for the wedding. In August, he shared a selfie on Instagram with Corley captioned, "this life & the next." He also posted a more posed photo, including a message about his appreciation for his fiancée. He wrote:

"Thank you Father, I know your grace so well through this woman. I trust your plan, and though I fall short I am reminded of your presence through your Word, which we read in fellowship."

It's not clear whether Chance and Corley have set a date for the wedding yet, but it sounds like the rapper is looking forward to the event. This year is sure to be a significant one in his career, as he's reportedly working on new music with Childish Gambino and Kanye West, according to Pitchfork. And now, it might be an even more exciting year in his personal life. His social media suggests he can't wait to tie the knot with Corley.