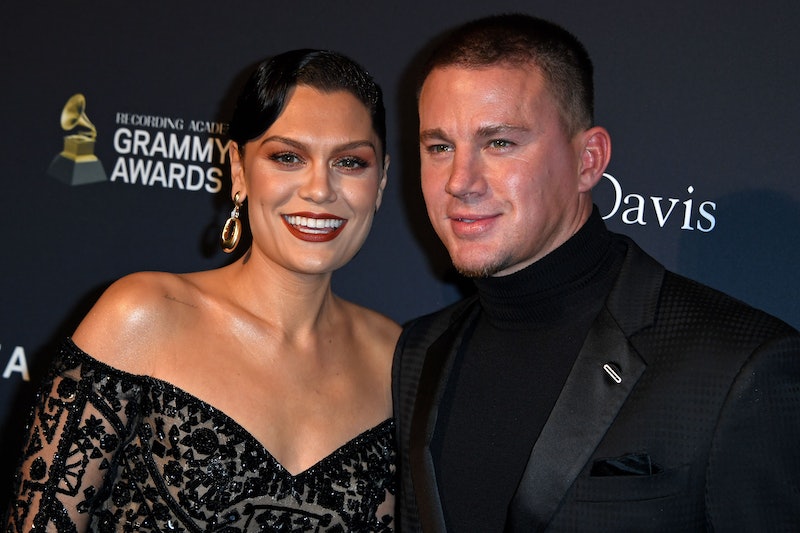 Just a few months after the Magic Mike star publicly declared his love for the British pop singer on social media, E! News reported on Saturday, April 4 that Channing Tatum and Jessie J have reportedly broken up once again. The pair — who were first spotted out together back in October 2018 — briefly called it quits in December 2019, before reuniting a month later. "It was an amicable breakup," a source close to the couple told E!. "They had tried again to make it work but realized they were better off as friends." (Bustle has reached out to Tatum and Jessie J's reps for comment on their reported breakup.)

The couple have been subject to an overwhelming amount of attention — both positive and negative — since the news of their relationship first broke. “Chan and I got photographed before our relationship was even a thing and that created such pressure," Jessie J told The Times in June 2019. "We’ve needed time to get to know each other." As a result, they attempted to keep their relationship under the radar for a while, although Tatum made his feelings public in March 2019 with a romantic birthday post for the singer.

"Wishing you the happiest day filled with all the love and all the light," he wrote on Instagram at the time. "You came into this world on this day and lit it on fire. You have blessed our eyes, our ears, our hearts and our lives. So thank you for just being you. You are so very special."

While they posted about each other sporadically on social media for much of their relationship, after their January 2020 reconciliation, Tatum publicly defended Jessie J and their romance from fans who wanted to compare her to his ex-wife, Jenna Dewan. "[There] ain’t nobody more stunning and beautiful — to look at but even more as a human — than Jess," the actor wrote in a since-deleted Instagram comment. "Sorry about your opinion. But what I said is facts."

He also asked fans who insisted on comparing Jessie J to Dewan to think before posting "hurtful" and "hateful" comments on his social media pages. "Jenna is beautiful and amazing in her own right," he continued, before adding that "no[one] is more beautiful or better than anyone else. Beauty isn’t measurable. It’s in the eye of the beholder."

In response, Jessie J shared her own loving tribute to her partner on Instagram, where she wrote that "When you put the outside whispers, noise and comparisons on MUTE and turn YOUR life volume UP full blast [and] when you surrender and fearlessly act on the truth that always was. Love GLOWS and GROWS in a different way."

Alongside a PDA-filled video of herself cuddling up to Tatum at the MusicCares Person of the Year gala — where they made their red carpet debut — she told the actor, "the way you love me and the way I love you and the way we feel it is all that matters." Even though they have reportedly called it quits once more, it's clear that Tatum and Jessie J have nothing but respect for each other.