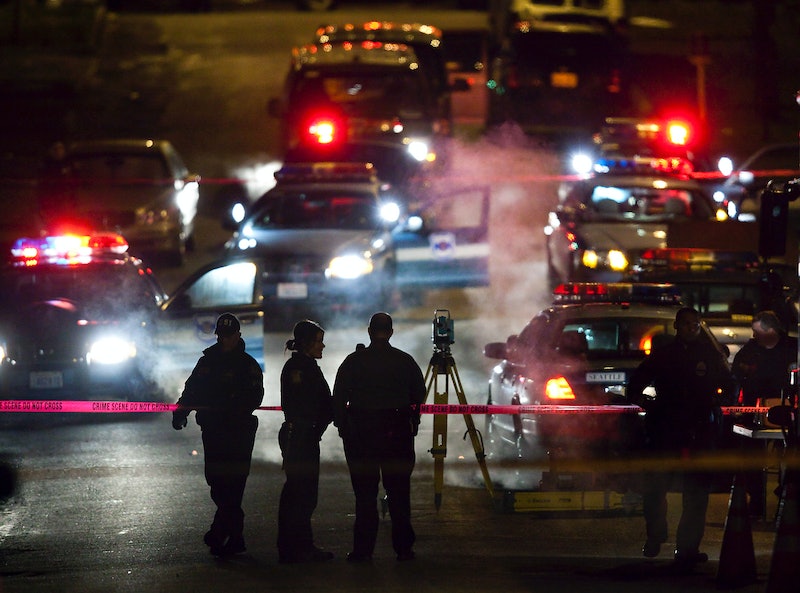 On Sunday, Seattle police shot and killed 30-year-old Charleena Lyles after reportedly responding to a call from her about a potential burglary. According to her family, Lyles had battled mental illness for some time, and the Seattle Police Department — as well as police departments across America — has a history of using excessive force on those suffering from mental illness.

On June 5, Lyles was arrested for harassment, obstruction of a public official, and harassment of a law enforcement officer, and was released conditionally on June 14. According to the Seattle Times, Lyles on Sunday called the police to report an attempted burglary. According to police, Lyles, who was pregnant, held a knife at some point during a confrontation with the officers who were dispatched to respond, and the officers fatally shot her. According to a Seattle Police Department statement, the Force Investigation Team will be looking into the officers' use of force.

In 2011, the Justice Department investigated police departments across the country and found that the Seattle Police Department too frequently used excessive force, and many times the victims suffered from mental illness. The report stated:

SPD officers escalate situations and use unnecessary or excessive force when arresting individuals for minor offenses. This trend is pronounced in encounters with persons with mental illnesses or those under the influence of alcohol or drugs. This is problematic because SPD estimates that 70 percent of use of force encounters involve these populations.

While the Department of Justice did not declare that the Seattle police engaged in discriminatory policing, they did highlight "serious concerns" about discrimination. Following the DOJ's findings, the Seattle Police Department began operating under a consent decree, which required the implementation of police reforms, including tracking its use of force.

In 2014, three years after the DOJ report, the Seattle Police Department created a Crisis Intervention Policy which would set guidelines and training for officers when confronting residents with mental illness. Later that year, some Seattle police officers filed their own lawsuit, claiming that the Justice Department reforms infringed on their right to use the force they consider necessary for protection. A federal judge rejected their claims.

By 2015, a report from the Seattle Police Department claimed that the number of times the SPD used excessive force with the mentally ill had decreased to less than 2 percent between May and August, with U.S. Attorney Annette Hayes calling the findings "encouraging."

Nationally, police shootings of people with mental illness aren't uncommon. According to the New York Times, people with mental illnesses make up at least 25 percent of fatal police shootings. Although reforms and training for recognizing mental illness have happened at some police departments across the country, they're not federal law, and therefore each department must adopt its own policy. In regards to the fatal shooting of Lyles, SPD stated, "Both officers were equipped with less lethal force options, per department policy. All Seattle police officers receive Crisis Intervention Training."

States even have the ability to define use of force for themselves, so it's more difficult to get a uniform look at what's going on. At least 27 states currently have laws requiring officers to be trained on interacting with people with mental illness issues, substance abuse, and behavioral disorder issues. Yet, it's not a national standard.

In the case of Lyles' death, it again puts a spotlight on this lack of regulation, and whether the Seattle Police Department and other police departments across America are able to properly assist people with mental illness.