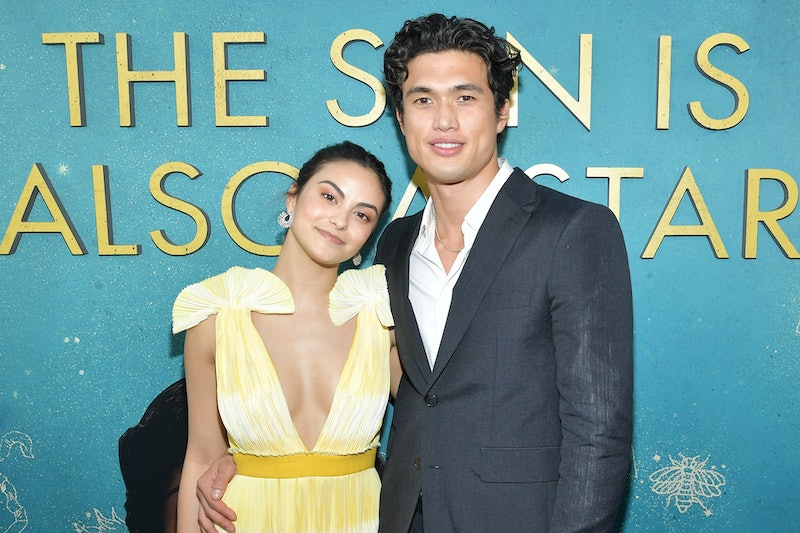 Riverdale costars Charles Melton and Camila Mendes have a love story that's captured the hearts of their many adoring fans. Adorably nicknamed "Charmila," the two have been going strong for some time now. But, when exactly did their relationship begin? Well, Charles Melton & Camila Mendes' relationship timeline details everything you need to know about the couple.

In case you needed any more convincing that this pair is the real deal, Mendes recently took to Instagram on May 12 to honor her beau's work on The Sun Is Also a Star and to spill some details about their relationship in the process. She wrote:

"i remember the day @melton told me about this project. we were still just friends then. he hadn’t even been cast yet. they hadn’t even started casting. all he told me was “i’m going to play this role, i am daniel bae.” aside from having the biggest heart out of anyone i know, his passion and tenacity are part of the reason i fell in love with him. watching him throw his entire heart and soul into this story of love taught me a lot about the kind of person he is."

She continued to express how proud she is of Melton, writing:

"i’m so proud of you charles, and so grateful to have witnessed this beautiful journey of yours. can’t wait for the world to see what you’re capable of."

Clearly, Mendes and Melton are such a strong pair. But, if you're wondering when their love story actually began, well...

"Charmila" was first linked together back in September 2018. According to E! News, a source spotted the couple, who were there with their Riverdale costars Lili Reinhart and Casey Cott, getting pretty close at the movies in Vancouver (where their CW series is filmed). Additionally, Mendes posted a photo on Instagram that featured the pair sitting near each other on a blanket during a yacht getaway with their friends, which only added to the romance rumors.

One month after the relationship rumors sparked up in earnest, Mendes and Melton went Instagram official. In her photo, which she captioned with a simple, "mine," the two actors shared a cute embrace, showcasing that the pair were, as previously rumored, more than friends.

During the 2018 holiday season, the two took a big step in their relationship as they visited South Korea. Melton even taught his significant other a little bit of Korean during their trip, jokingly captioning one of his Instagram posts, "i taught her how to say 'shut up idiot' in korean & now i really regret it," and adding, "happy almost new year."

In January 2019, Mendes celebrated her boyfriend's birthday by posting a fun photo on Instagram along with the cutest caption ever, writing, "happy birthday @melton i will always protect you 💖." How major (and adorable) is that?

In February 2019, "Charmila" had a date night to end all date nights. They put on their black tie best as they went to the NFL Honors ceremony (according to Teen Vogue, Mendes presented an award during the event). Based on the photos that they both posted from the event, it's safe to say that had a lovely time together.

May 2019 marked a major relationship moment for the actors, as Mendes and Melton made their first red carpet appearance together as a couple at the Met Gala, where they put their love on full display.

Whether they're spending the holidays together or taking over the Met Gala in their red carpet best, it's clear that Melton and Mendes (or, "Charmila") are the real deal.

More like this
Rita Ora Celebrates Finding Her "Fairytale" Ending With Taika Waititi
By Sophie McEvoy and Catharina Cheung
Dixie D’Amelio & Noah Beck “Love Each Other” Despite Breakup Rumors
By Julia Emmanuele, Jordyn Tilchen and Grace Wehniainen
Molly-Mae Hague & Tommy Fury Celebrate Pregnancy Reveal In The Sweetest Way
By Sophie McEvoy and Sam Ramsden
The 'Bachelor In Paradise' Schedule Shifts To 4 Hours Every Week After The Season 8 Premiere
By Brad Witter
Get Even More From Bustle — Sign Up For The Newsletter