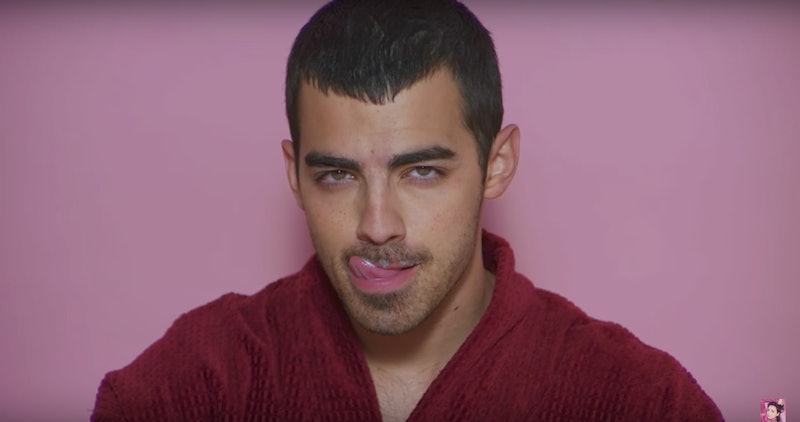 Music videos have long catered to the male gaze, featuring gratuitous shots of scantily clad women acting as little more than eye candy. There is certainly a trove of artists who don't feed into that stereotype, but Charli XCX's "Boys" video brilliantly flips it on its head — and in more ways than one.

True to the song title, the clip features a star-studded roster of men: Joe Jonas, Riz Ahmed, Charlie Puth, Mac DeMarco, the list goes on. There are a few shots aimed directly at sexist clichés: Puth washes a suds-upped car, a shirtless Diplo plays with puppies, Panic! At the Disco's Brendon Urie poses in a bed of rose petals. But there are plenty of silly jabs, too. Chromeo has a pillow fight that immediately evokes all those pesky girls-at-sleepovers fantasies, and DeMarco ridiculously modeling an electric guitar is arguably the best sequence in the entire two-and-a-half minutes.

Beyond that, though, Charli directed the video alongside Sarah McColgan, challenging yet another problematic misconception. According to the The Wrap, the next 149 movies by major studios over the next three years includes just 12 female directors — a mere 1 percent improvement over 2016’s figures.

Of course, those statistics apply to feature films, not music videos, but the point stands, and the post-credits footage of Charli and McColgan running the show makes a powerful statement: Women are just as capable as men, and shutting them out of a field in which they clearly thrive is both outdated and ignorant. (Any naysayers can kindly look to Wonder Woman's landmark success, or any number of Beyoncé's self-directed videos.)

"I made a conscious decision to not be in the video and to have all the guys doing the sexy things that girls are normally doing — which I think they enjoyed," Charli told Junkee in a recent interview. "All the guys are in this video because they have a sense of humor and because they understood the concept. I told them about the whole idea of averting male gaze and they were all really into it and reacted really positively to it."

As for Charli, "Boys" has already been viewed on YouTube nearly 3 million times in the mere 24 hours since its release. That can speak for itself.