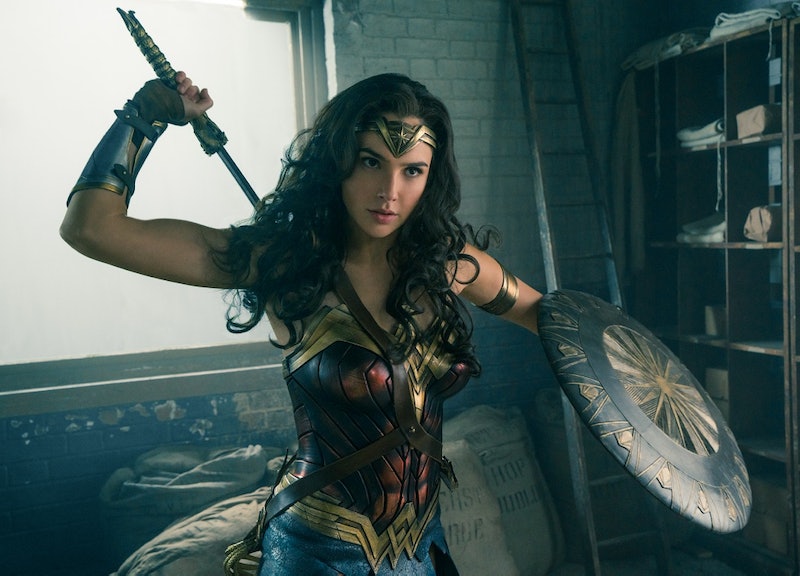 Wonder Woman has only been out for two days, and it's already hurt male egos around the world. The film stirred controversy when a theatre in Austin, Texas organized a female-only screening, causing outrage among men in the community and online. It's also picked up several absurd sexist reviews from film critics, who tend to focus more on star Gal Gadot's appearance than plot or content. However, male fragility has not set back movie sales, and in its first week, Wonder Woman is already breaking box office records. The films financial and critical success shouldn't come as a surprise, as comic book lovers have been waiting for a female superhero movie for over a decade.

The successful opening weekend broke several important records, and may hint at further progress for remedying Hollywood's gender disparity. According to The Hollywood Reporter, the film opened to a historic $100.5 million in domestic ticket sales, making it the biggest opening of all time for a female director. The last woman to hold the position was Sam Taylor-Johnson, for Fifty Shades of Grey. Overseas Wonder Woman was equally successful, raking in $122.5 million dollars in markets abroad, according to THR. That means it opened $223 million globally, a successful launch for the first female superhero franchise in history.

These numbers are significant in an industry that tends to shy away from female storylines, and shut women out from directorial positions. The last female superhero movies were Catwoman and Elektra, and since neither film took home a particularly large box office sum, women were excluded from the genre for another decade. Fans can hope that Wonder Woman's big opening weekend will send a clear message to production companies that there is an audience and desire for female superhero films.

Speaking of these audiences, THR also reports that Wonder Woman crowds skew female. This shouldn't be a shock, but according to the publication, men tend to dominate ticket sales for big comic book franchise films, usually at 60 percent. This story has clearly welcomed women into a community that previously felt exclusive, and as it turns out, inclusivity is very good for business.

While the movie is setting records for female directors, it also stacks up sales-wise with some of the biggest superhero titles of the past decade. It's the 16th superhero film to hit $100 million, on a list that is dominated by Marvel's mega hits like The Avengers and Captain America: Civil War. The film is more than just a financial success, and other than the few unfortunate male reviews, the film is a critical win as well. DC comic book movies tend to struggle more than Marvel in the reviews department, so DC entertainment will also benefit from Wonder Woman doing well.

Fans can hope that these numbers will provide incentive to major production companies to green light more female superhero films. It should also show that these stories reach full potential when they are put in the hands of female directors and production crews — which are uncommon, if not entirely unheard of, in Hollywood. It's ridiculous that it took this long for the industry to produce a movie like Wonder Woman. But with a record-blasting opening weekend, the world has showed Hollywood this story was long overdue.