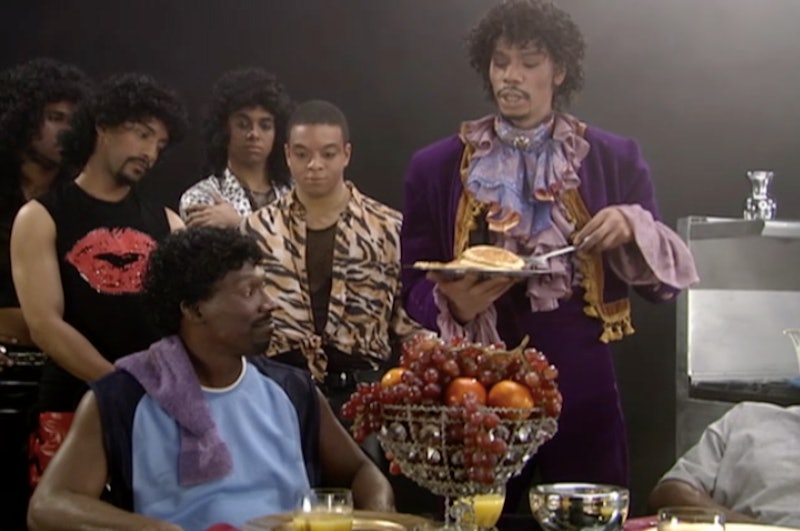 Chapelle's Show just lost one of its most memorable alumni: Charlie Murphy has reportedly passed away at the age of 57 after a battle with leukemia. Murphy was a writer and cast member on the Comedy Central show during the height of his success. And while the brother of Eddie Murphy was a stand-up comedian and performer in his own right, he was mainly known for making his celebrity connections into tales of hilarity with Charlie Murphy's True Hollywood Stories sketches. The most iconic one celebrated another gone-too-soon star: Prince.

In a Season 2 installment of Charlie Murphy's True Hollywood Stories, Murphy tells the story of playing basketball with Prince, and it is top-to-bottom funny. For once thing, it's set in the bizarrely fashioned era of the mid-'80s, with Murphy's younger self rocking a suit and Jheri curl like it's nobody's business. Eddie is approached by His Purple Majesty (rocking a ruffly violet Zorro outfit) and he invites the Murphy brothers and their squad to listen to music at his house. This eventually bores Prince, so instead he challenges them to a game of basketball against him and the Revolution. And while the Murphy crew changes into athletic wear, Prince and his squad are still in their threads.

Deeply unthreatened, Murphy remarks that the team names should be "the shirts against the blouses," and a crazed Prince takes that remark and makes them look like damn fools. Prince, as it would turn out is "incredible" at basketball, leading his team in a landslide victory. "Game: Blouses," Prince declares, to the peals of studio audience laughter. And because he's a real good sport, Prince brings the whole gang inside his house and serves them a stack of delicious pancakes.

The best part of this is that — like the other Charlie Murphy's True Hollywood Stories — well, it is a true story. And while Murphy swears it's legit in the video, it was later verified by Prince's friend. The best part? The singer even used a screenshot of the Prince-ified Dave Chappelle for his single "Breakfast Can Wait," holding up a plate of pancakes.

And so, thanks to Murphy's stellar storytelling, the amazing true tale lives on forever, even with the loss of both principle players (and the show in general).

Feel free to experience the legend of Murphy yourself by re-watching the uncensored video on Comedy Central's site.