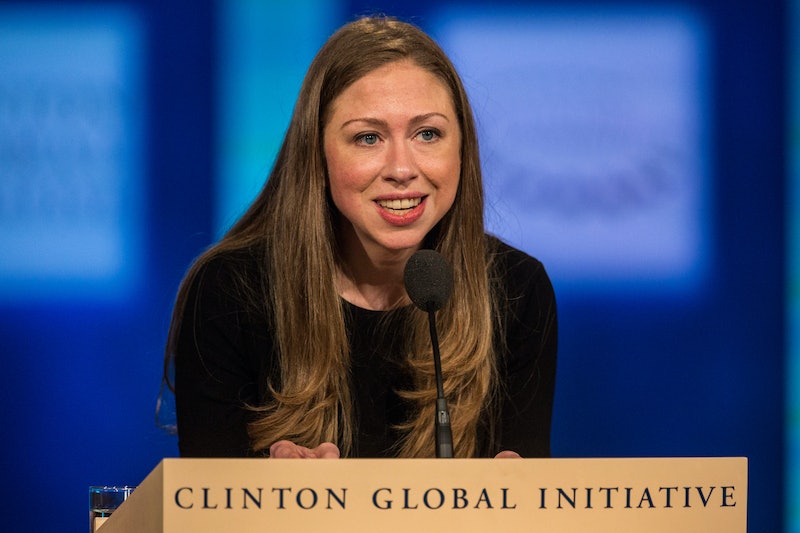 Come summer, the Clinton family is expected to welcome a new member to the bunch. On Tuesday, Chelsea Clinton announced her third pregnancy on Twitter: "Marc [Mezvinsky] and I have loved watching Charlotte be such a wonderful big sister and we’re excited to watch Aidan become a big brother! We cannot wait to meet our newest addition later this summer."

Motherhood is nothing new for Clinton. In 2014, she gave birth to her daughter Charlotte, who was then followed by Aidan in 2016. In 2017, Clinton spoke with Romper about the difficulties millennial mothers faced with limited time, increased responsibilities, and frequent economic restraints that especially impact women from poorer backgrounds.

For working mothers in the United States, grappling with the intense demands of parenting while also trying to keep up with professional obligations is unique and often distressing.

"For starters, the United States is one of only nine countries across the world that doesn’t mandate maternity leave — and the only developed country," Clinton told Romper. "This is outrageous, and it means that from the very beginning women are struggling to carve out the time they both need and want with their children — and make ends meet."

Clinton's announcement about her third pregnancy is sure to thrill her mother, Hillary Clinton. The Hill reported in 2018 that the former Democratic presidential nominee said in a comment that the best thing about losing the 2016 presidential race was that she had more time to spend with her grandkids.

"I get to see them all the time," Hillary said back then. "I get to spend a lot of time with them ... They’re the loves of my life." She added that she would FaceTime with young Charlotte and Aidan.

Apart from the challenges that mothers face, Clinton has also been vocal about a range of other political issues, especially under Donald Trump's administration. And she seems to have kept her children aware of these matters, too.

In 2017, after Trump signed an executive order involving a travel ban on at least six Muslim-majority countries, Clinton joined protesters in New York City and brought her daughter along. "Thank you to all who organized #IAmAMuslimToo today," Clinton tweeted adding that it was the first protest Charlotte attended.

Clinton's tweet expressed joy about expecting another child. Based on her previous interviews, Clinton seems to have tackled the initial challenges of brand-new motherhood. In a candid interview with E! News in 2015, Clinton said that when she first had Charlotte, she didn't know what to do.

"I wish that there'd sort of been a guidebook on how do you think about this, really, how do you make this work?" Clinton told the outlet. It didn't take long for Clinton to excel at being a mom. "Every woman has to figure it out for ourselves," she said, "because each of our situations and decisions are so different."