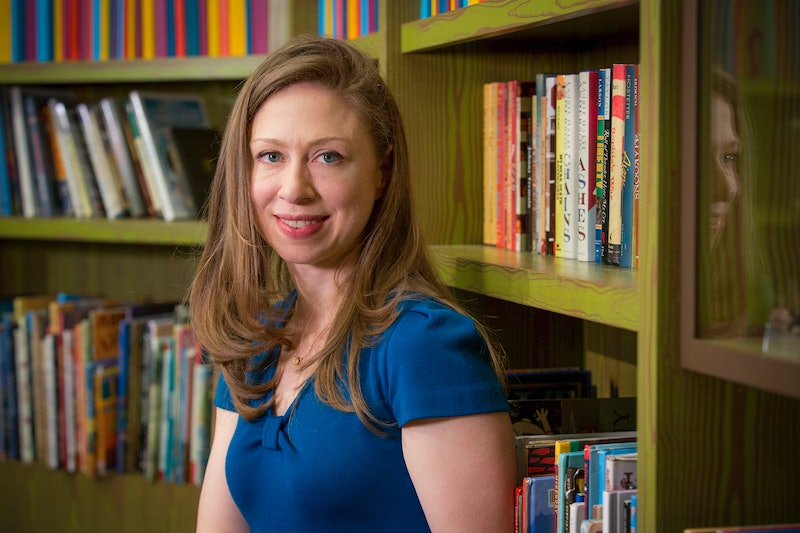 Before you read the first word on the first page of Chelsea Clinton's new book, you already know one thing: Strong women have always been a big part of her life. There's her mother, Hillary Rodham Clinton, who was the first woman to run for president on a major party ticket. There's Sally Ride, the first American woman in space, who spoke at Clinton's space camp in the '90s. And then there's Sen. Elizabeth Warren, a friend of Clinton's (and of course, a U.S. Senator), who sparked the feminist battle cry "Nevertheless, she persisted" when she was scolded by Sen. Mitch McConnell in February 2017.

"I don't think the Senate Majority Leader had any idea what he would help unleash,'" Clinton tells Bustle in an exclusive interview at the New-York Historical Society.

But, of course, not everyone's mother made a revolutionary speech about gender equality two decades ago in China. Not everyone can just pick up the phone and call Warren, who Clinton credits as the inspiration for her children's book series. And sadly, the closest most kids got to space camp was watching the winners of Nickelodeon game shows claim their first-prize tickets.

While Clinton's last name has given her access to people and experiences most could only dream of, she has chosen to use her spotlight to pay it forward. To that end, she's releasing the second book in her children's series just ahead of International Women's Day, which takes place every year on March 8. She Persisted Around the World: 13 Women Who Changed History features exceptional women like Pakistani activist Malala Yousafzai, British author J.K. Rowling, German astronomer Caroline Herschel, Brazilian soccer star Sissi, and Chinese ballet dancer Yuanyuan Tan, and so many other women who ought to be household names. The title, She Persisted, is also the theme of this year's Women's History Month, which takes place during March of each year.

"'Nevertheless, she persisted' became a rallying cry for women, not only across our country, [but] really around the world," Clinton says, pointing out that children's books, in particular, can have a profound effect on how kids understand their world and "what can be possible in the world that they want to help create, build, [and] work for, fight for."

Why "Nevertheless, She Persisted" Is Here To Slay

The women profiled in Clinton's book aren't all well-known, but their stories are familiar: A molten mix of talent, ambition, and perseverance drives them to take a stand — and to force a reckoning within their communities about gender, often in the face of unbelievable adversity.

Many Americans, children and adults alike, have watched this narrative play out over and over again in the past year's politics. Whether it was Warren's Senate-floor showdown, Rep. Maxine Waters defiantly "reclaiming my time," Sen. Kamala Harris withstanding repeated interruptions by her male colleagues, or Hillary Clinton being followed around a presidential debate stage by then-candidate Donald Trump, Clinton argues that women should not be — and are not — discouraged by these moments.

Clinton feels that one of the ways this dynamic can change is by having more women in office. Lawmakers traditionally consider a small group of issues as "women's issues" (think birth control and maternity leave), but Clinton argues that women's issues include much more than that — and the people who know that best are women.

For women of all ages, the notion of what's possible may suddenly be shifting. After Trump's inauguration, women marched on Washington, D.C. in record-breaking numbers wearing bright pink "pussyhats" — a dig at the infamous Access Hollywood tape in which Trump bragged about grabbing women by their genitals. Then, a seismic shift in Hollywood, media, and the government hurled badly-behaving men from their perches of power. But outside of #MeToo, the Trump administration charged forward with its "America First" policies — while leaving behind international commitments to uphold women's reproductive rights and fight gender-based discrimination.

"I'm infuriated by the kind of retrograde posture of the current administration toward women and girls," Clinton tells Bustle. "Not only around the world, but also here in the United States."

"Not only are we not leading, this administration's trying to wrench us backwards."

Clinton specifically points to the Trump administration's enforcement of the "Global Gag Rule," which forbids any and all international non-governmental organizations (NGOs) that receive U.S. aid from performing — or even discussing — abortions. If these NGOs don't comply, all of their funding will be pulled. Just one year in, health care workers say the policy is already hurting women in the developing world.

"It stretches across everything from HIV/AIDS and malaria, to infectious diseases, to noncommunicable diseases like heart disease, cervical cancer, to basic sanitation," Clinton says, pointing out that there are reproductive health elements within all of those concerns.

"[It] is not only indecent, it's dangerous, and it will cost women's lives," Clinton adds. "I wish that the administration cared more about what we know from public health, human rights, [and] medical research than their own reactionary rhetoric, and I'm really disappointed that's not true."

Nations like Sweden, Norway, and the Netherlands, along with nonprofits — including The Clinton Foundation and the Clinton Health Access Initiative — are picking up the slack during what Clinton calls "a crisis moment."

"Other countries and other various NGOs, foundations, activists, advocates, [are] all coming together to ask, you know, 'What can we do to fill the breach that the United States is now leaving?' because not only are we not leading, this administration's trying to wrench us backwards," Clinton says. "And thankfully there are a lot of people who just say, 'No. We're not going back.'"

For all of Clinton's fans and friends online, a glance at her Twitter mentions shows social media's dark side.

"I wouldn't speak for all women, but speaking for myself, I think it is an odd experience," Clinton says when asked what it's like to be a woman on the internet right now.

Clinton's method for facing the "misogyny that now ... can be unleashed in 280 characters or a Facebook post" seems to follow a simple rule: Kill 'em with kindness.

When a Twitter user got angry over a tweet Clinton posted about gay parents being banned from adopting in the state of Georgia — in which that user called being raised by a gay family "child endangerment, period" — Clinton sent back "love, hugs, and goodness."

When conspiracy theorists pushed bogus reports that the high school-aged victims of the Parkland shooting were "crisis actors" planted by the gun control lobby, Clinton took the controversy straight on.

"Never thought I would wish for the conspiracy theorists to push insanity du jour about my family (looking at you #Pizzagate)," Clinton tweeted a week after a gunman killed 17 people at his former high school in Florida. "Then they turned to the courageous #Parkland students, and here I am hoping they soon return to making up stories/memes/gifs about me and _____."

"The remarkably courageous Parkland students ... were just determined that their voices be heard and that we move forward in a meaningful sense on gun violence prevention," Clinton says, noting how quickly a huge amount of support can swell online to shout down misogynists, homophobes, Islamophobes, anti-Semites, and hate.

Clinton says that when it comes to voicing their opinions online, women often find themselves face-to-face with "the most vile parts of human nature." But at the same time, she says their voices can go viral in the best sense of the word, to fight "against the ugliness [and] really support good people, good things, good causes, moving forward together."

What Has To Happen Next

The #MeToo movement is underway, a record number of women are running for office, and protests are reaching a fever pitch not seen in decades. But Clinton chooses her words carefully when she's asked if this moment feels different.

"I am optimistic we'll get there, but I still want that optimism to be proven. And I'm going to do everything I possibly can to make this moment worthy of our optimism."

For Clinton and her female friends, family, and trusted advisers, this is a time of "hope, but also anxiety."

"We know that the hope will only matter the most if we're able to translate that into voting in November... putting pressure on other parts of our community, on companies, on institutions, to really not only listen to women, but to be held accountable by women and for women," Clinton says.

"I am optimistic we'll get there, but I still want that optimism to be proven," Clinton says. "And I'm going to do everything I possibly can to make this moment worthy of our optimism."