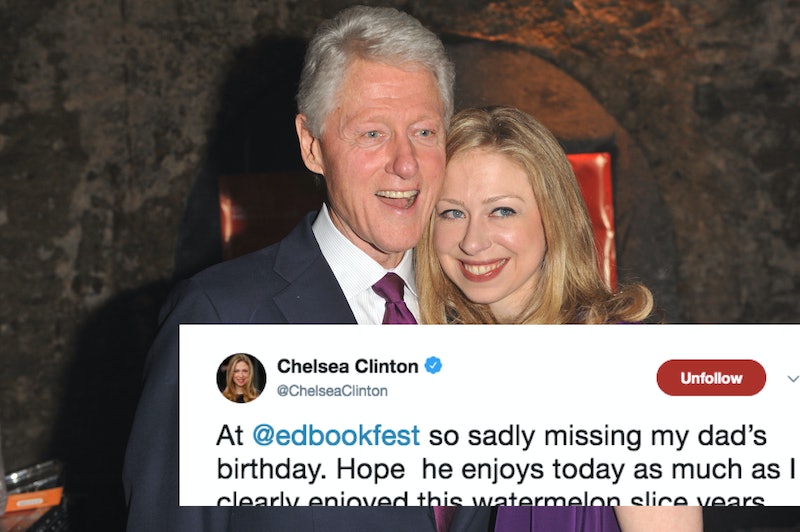 Sunday, Aug. 19 marked Bill Clinton's 72nd birthday, and, as a public celebration of the occasion, Chelsea Clinton sent a birthday tweet to her dad that included an adorable look into the family's pre-presidential life.

"At ⁦@edbookfest⁩ so sadly missing my dad’s birthday," she tweeted on Sunday, referring to the Edinburgh International Book Festival currently taking place. "Hope he enjoys today as much as I clearly enjoyed this watermelon slice years ago! Happy Birthday ⁦@BillClinton⁩!"

Along with the tweet, Chelsea posted a black and white photo of herself as a toddler with a mostly-eaten piece of watermelon in her hand, her father bending down to talk to her. The nation's 42nd president has also received Twitter well wishes from, for example, the Democratic Congressional Campaign Committee, the Clinton Foundation, and the ambassador to the U.S. from Kosovo, the Balkan nation that Clinton helped to bring into being and that has a towering statue of him in its capital city of Prishtina. However, none of these tweets are quite as touching as the one coming from his daughter, who has become quite the Twitter star in the past couple of years.

Clinton told Bustle in a March interview that she deals with a lot of Twitter trolls, but what she often chooses to populate the site with herself contains only good vibes — like this message to her father. She said that despite facing a lot of misogyny, women can also use their online platforms to work "against the ugliness [and] really support good people, good things, good causes, moving forward together."

Former President Clinton also spends a lot of his time these days dedicated to good causes himself. He's heavily involved with the Clinton Global Initiative, the globally-focused wing of the Clinton Foundation — which, despite conspiratorial claims to the contrary, is actually a top-rated charity.

According to the foundation, the former president has been working on hurricane recovery efforts in the Caribbean lately, including a trip to Miami, St. Lucia, and the U.S. Virgin Islands earlier in August. He's also recently posted on Twitter about work he's done to support the Special Olympics, further and learn from development efforts in Bosnia and Herzegovina. The former president also recently co-wrote a political thriller with James Patterson called The President Is Missing.

The former president hasn't exactly perfected the art of responding to Twitter trolls in the same way that his daughter has, however. Chelsea Clinton frequently models the most polite way of tweeting back at people who have accused her of any number of unfounded claims. She also takes the occasional opportunity to mock the current president or even criticize his policies. Twitter can be a pretty ruthless platform, but a quick swing through Clinton's posts will only get you positivity and calls to support her chosen causes, like combatting climate change or protecting endangered orangutans. She also didn't miss the chance to note something else important about her father's birthday.

"Not sure how I missed that my dad @BillClinton & Snuffleupagus share a birthday!" she posted on Sunday, retweeting Sesame Street's original post. "Happy Birthday Snuffleupagus!!"