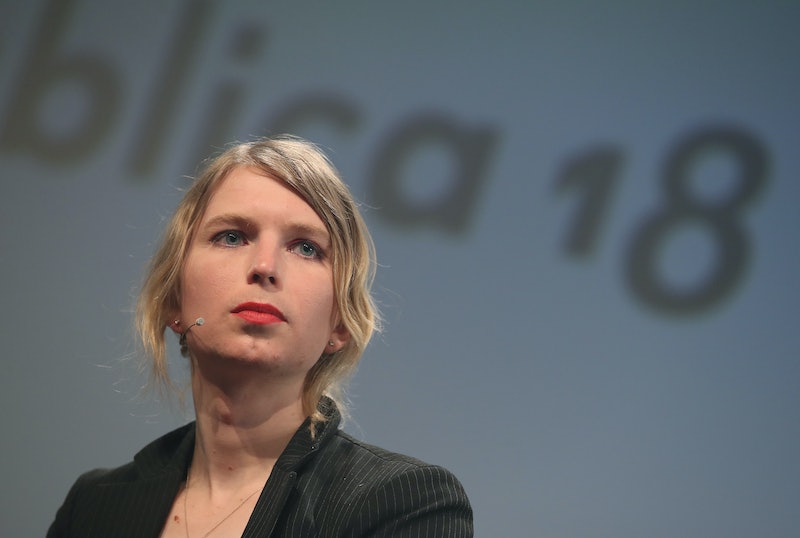 Former Army intelligence analyst and whistleblower Chelsea Manning has been ordered to jail for refusing to testify in a grand jury investigation pertaining to Wikileaks. A federal judge in Virginia found Manning, who leaked classified military documents to WikiLeaks in 2010, to be in contempt of court for refusing to answer questions from a secret grand jury.

Earlier in the week, Manning had said that she'd refused to answer questions regarding her 2010 leak on the grounds they violated her First, Fourth, and Sixth Amendment rights. "I responded to each question with the following statement: 'I object to the question and refuse to answer on the grounds that the question is in violation of my First, Fourth, and Sixth Amendment, and other statutory rights,'" she said in a statement tweeted Thursday. Manning also said that she objected to the secrecy of the sealed grand jury case and would "stand by my principles."

But Manning was also aware that her refusal to testify could see her taken into custody. "The court may find me in contempt and order me to jail," she said, referring to her return to federal court Friday for a "closed contempt hearing" in which the judge would rule on the legal grounds for her refusal to submit to the grand jury's questions. "My legal team continues to challenge the secrecy of these proceedings, and I am prepared to face the consequences of my refusal."

According to the Associated Press, Manning's lawyers had requested she be confined to her home instead of held in jail due to medical complications. U.S. District Judge Claude Hilton, has reportedly denied that request, claiming that U.S. marshals could handle her medical care. The Washington Post has reported that while Manning's attorney had advocated for home confinement, they did acknowledge that prosecutors had "bent over backwards to accommodate" medical needs reportedly linked to Manning's gender reassignment surgery. The former Army intelligence analyst revealed in 2013 that she had long identified as female and has previously credited hormone therapy as being "literally what keeps me alive."

As of now, it's unclear for exactly how long Manning will be held in custody. According to NBC News, Manning may remain in jail until she testifies or the grand jury completes its assignment. While speaking to reporters outside the courthouse on Friday, Moira Meltzer-Cohen, one of Manning's lawyers, said Manning could "in no event" be held for longer than 18 months.

"Chelsea has tremendous courage," Meltzer-Cohen said in a statement captured on camera by News2Share journalist Ford Fischer. "Our primary concern at this point is her health while she is confined and we will be paying close attention."

While prosecutors in the case have, according to the Associated Press, said they've been assured Manning's medical needs can be met by the jail, they've also said they'd prefer not to keep her in custody and have urged her testify. "The government does not want to confine Ms. Manning." The Washington Post reported Prosecutor Tracy McCormick said Friday. "She could change her mind right now and decide to testify."

The investigation into WikiLeaks has reportedly been going on for quite some time, the Associated Press has reported. Although the case remains sealed, prosecutors inadvertently exposed the case, as well as sealed criminal charges against WikiLeaks founder Julian Assange, late last year.