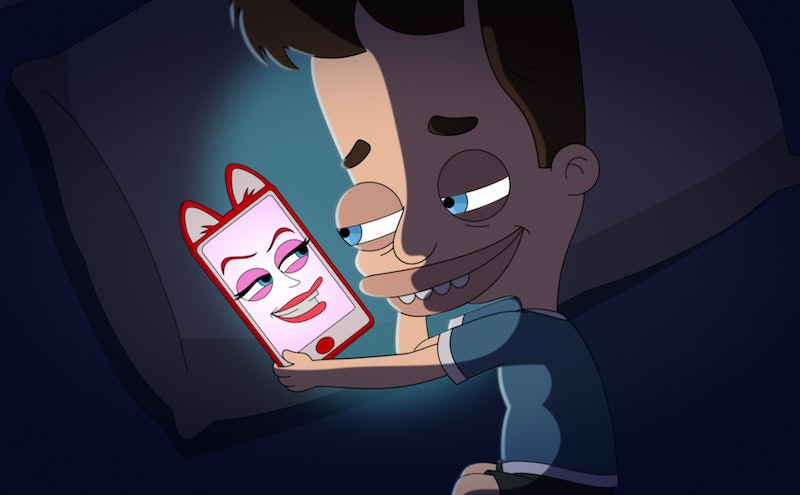 Spoilers ahead for Big Mouth Season 3, Episode 4. Since Chelsea Peretti's Brooklyn Nine-Nine character, Gina, was so obsessed with her cellphone, it seems only natural for the actor to play one herself. Chelsea Peretti plays Cellsea in Big Mouth Season 3 — a hand-me-down phone that Nick (series co-creator Nick Kroll) receives from his older sister after she upgrades.

In addition to B99 and Big Mouth, Peretti appeared in the 2018 action comedy Game Night and several episodes of Kroll Show. She's also made cameos on Parks and Recreation, Girls, and Key & Peele. This isn't Peretti's first role in Big Mouth either; she also voices Missy's mother, Monica Foreman-Greenwald. Meanwhile her husband, Jordan Peele, also appears in Big Mouth as the Ghost of Duke Ellington.

As for her character Cellsea, she's funny, flirty, and much quicker than Nick's previous cell, which asks him in a raspy voice, "Do you want to telephone your father?" When Nick says no, he responds, "Oh, good. That new update gave me battery cancer."

Cellsea, on the other hand, is full of life and sass, introducing her new owner to the wonderful world-wide web. Their relationship starts out innocently enough, with her helping Nick choose a flattering selfie to upload and assuring him that watching videos of people cutting soap is "oddly satisfying."

But things soon take a dark turn, and Cellsea is soon demanding that he pay attention to her — to the detriment of his real life relationships. She's essentially portrayed as his toxic girlfriend, asking him, "Do you love me, Nicky?" "I'm obsessed with you!" he responds, eagerly.

Andrew, meanwhile, goes on a quest to unplug himself and marvels at the "perfect leaf" he found outside. Indeed, both characters are equally obnoxious, with Andrew transforming into a veritable old-man-yells-at-cloud, loudly proclaiming that everyone is glued to their devices.

Nick, meanwhile, becomes obsessed with garnering attention online: Cellsea even convinces him to take a video of his father performing his elaborate skincare routine completely nude, singing about powdering his testicles after a shower, which he then posts to social media.

However, Cellsea's not all bad — as Nick points out to Andrew (in the rare moment he engages with his friend), technology has improved their relationship, since they're able to text in the middle of the night and Google the inane questions they have. It's bad enough that the middle schoolers in Big Mouth are struggling to understand the changes their bodies are going through, but developing time management skills and cellphone etiquette is another hurdle today's teens must overcome.

According to a 2018 Pew Research Center survey, 95 percent of teenagers own cell phones, with 45 percent saying they're online almost constantly. The study revealed that kids are on YouTube the most, with Instagram and Snapchat being second and third, respectively. However, the problems aren't isolated to kids — per another Pew study, 81 percent of adults own a smartphone, as of 2019.

Just take Nick's mom on Big Mouth, who becomes obsessed with online Boggle and ultimately asks her husband to remove the game from her phone so she's not tempted. When someone's introduced to a shiny new technology, it can be difficult to limit their usage — regardless of age. So it's no wonder Cellsea was such an alluring, all-consuming presence for Nick.

Ultimately, Nick's mom takes matters into her own hands and murders his beloved, technological girlfriend, thus ending Cellsea's reign of all-consuming distraction. But while audiences will likely miss Peretti's performance, perhaps it was the best thing for both Nick and Cellsea.