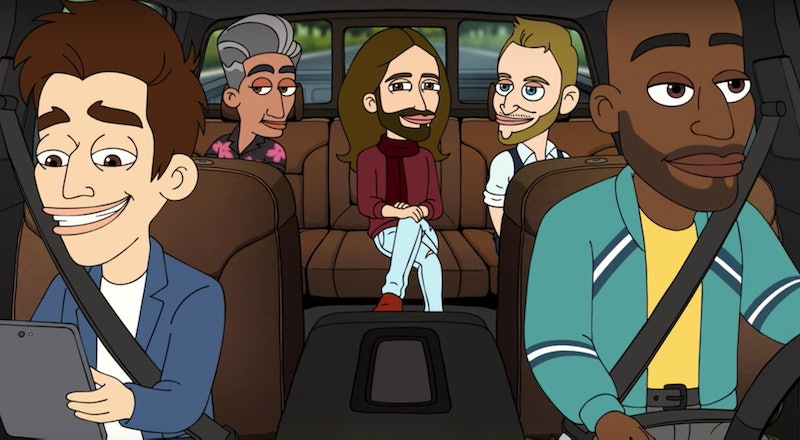 The Fab Five’s latest makeover nominee is unlike any other. The new Big Mouth Season 3 trailer teases a Queer Eye crossover with the ultimate Fab Five makeover. Big Mouth, a zany animated sitcom that explores adolescence and puberty, officially returns for Season 3 on Friday, Oct. 4 — and if the cameo-filled clip is any inclination, it’s going to be a good one. At the end of the trailer, our favorite makeover mavens Tan France, Antoni Porowski, Bobby Berk, Karamo Brown, and Jonathan Van Ness (all animated, of course, and voiced by none other than themselves) are en route to meet their next makeover subject: Coach Steve.

In the hilarious clip, the Fab Five make their way to Coach Steve’s literal garbage-filled home. An animated Van Ness then asks, “What is your current grooming situation, sweetie?” In true Big Mouth form, Coach Steve (one of the many characters voiced by co-creator Nick Kroll) picks up a nearby brush and responds, “I call it ‘the brush.’ ‘Cause it’s one brush I use for all my parts. My head, my teeth, my peena. And my asshole.” Van Ness aptly quips, “Jesus in my vagina, that poor brush.” The makeover is certainly a departure from Queer Eye’s usual nominees.

While the cameo is grandiose in itself, the Fab Five aren’t the only notable figures lending their voices to the animated comedy this season. Elsewhere in the trailer, an animated Ali Wong — donning her signature red-framed glasses — declares, “I am pansexual.” And, if Wong and the Fab Five simply aren’t enough to delight fans, Thandie Newton also lends her voice to the upcoming season as Missy's Hormone Monstress. That’s a whole lot of star power for a series that already has several comedy greats — including John Mulaney, Maya Rudolph, Jordan Peele, and Fred Armisen — in series regular roles.

The Queer Eye cameo shouldn’t necessarily come as a surprise to fans. A few days prior to the trailer’s debut, members of the Fab Five took to Instagram to share sneak peek sketches of their respective characters. “When the cartoonist joked that I have a big head I thought they were kidding,” Porowski wrote on Instagram. “I’ve never looked better,” France later wrote in a separate post.

Big Mouth doesn’t mark the Five Fab’s first crossover into other pop culture realms. Back in 2018, Netflix filmed a Patriot Act crossover with fashion expert France as he attempted to dress host Hasan Minhaj. In June, the makeover mavens were featured in Taylor Swift’s LGBTQ-friendly “You Need to Calm Down” music video. Then, in August, Netflix’s Dear White People featured a Queer Eye parody in Season 3 with a fictional TV show titled U.S. of Gay that featured Fab Five lookalikes. And, in late August, ABC announced that culture expert Brown would be a contestant on Season 28 of Dancing With the Stars. Basically, the Fab Five’s influence is undeniable.