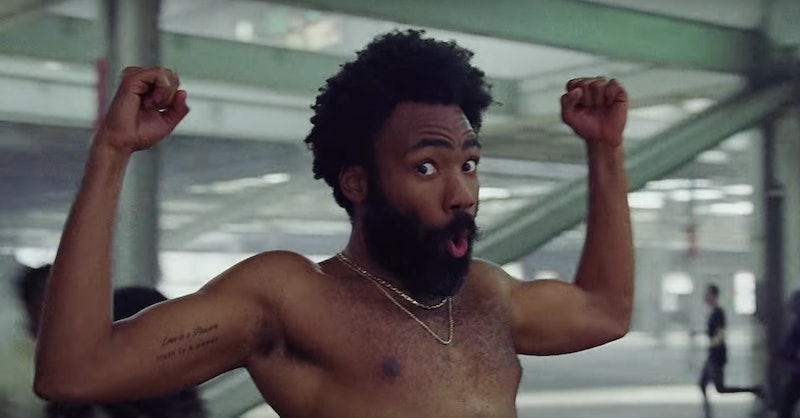 After amassing considerable praise for its socially-conscious depiction of gun violence, Childish Gambino's "This Is America" reached No. 1 on the Billboard Hot 100 chart this week, Pitchfork reported on May 14. This marks the first number-one hit for Gambino — aka the musical alter-ego of actor Donald Glover — and its success could very well be tied to the overwhelmingly positive response that the track's music video has received from fans and celebrities across social media.

Before now, Gambino had yet to see any of his tracks break Billboard's top 10. His last charting hit, "Redbone," from 2016's Awaken, My Love!, made it to number 12 on the Hot 100 in August 2016, but previously released singles didn't even crack the top 50, according to Billboard.

In assuming the number-one position on the Billboard Hot 100 — which takes into account track streams and purchases — Gambino bumped Drake's Lauryn Hill-sampling "Nice For What" from the top spot. No easy feat, considering the song had been firmly planted there for the last 15 weeks, Billboard noted.

Glover debuted the music video for "This Is America" after performing the track for the first time (as Gambino) on the May 5 episode of Saturday Night Live. The video was directed by Glover's longtime Atlanta collaborator Hiro Murai, and is a provocative depiction of racism, gun violence, and pop cultural distractions right now in America.

Less than 10 days after its release, the video for "This Is America" has amassed more than 110 million views. Fans and critics have been fascinated by its underlying, metaphorical imagery, much of which can easily go unseen until the second or third watch.

“The central message is about guns and violence in America and the fact that we deal with them and consume them as part of entertainment on one hand, and on the other hand, is a part of our national conversation,” Guthrie Ramsey, a professor of music history at the University of Pennsylvania explained to TIME in an interview published May 7. “You’re not supposed to feel as if this is the standard fare opulence of the music industry. It’s about a counter-narrative and it really leaves you with chills.”

"Donald Glover is a Genius," Erykah Badu tweeted on May 6. "What happens when you put creative agency in the hands of artists," Black Panther's Winston Duke shared the same day, "Powerful narratives, carried by the vehicle of entertainment. Specificity is the universal connective tissue. Big shout to @childishgambino for this one #ThisIsAmerica."

Jaden Smith dubbed the video "iconic," and Janelle Monáe simply wrote, "Donald . Glover .," followed by, "Childish . Gambino ." Taraji P. Henson excitedly added on May 7, "@childishgambino YOU ARE THE BASQUIAT OF MUSIC!!!! I adore you!!! KEEP SHINING!!!," and actor Lena Waithe tweeted, "'This is America' speaks to what audiences really want. The truth dipped in chocolate brilliance. Thanks, D."

In the days that followed the release of "This Is America," countless more celebrities continued to profess their appreciation for Glover by re-posting the video on social media, which likely contributed to the song's streaming success. The fact that it often requires more than one viewing to understand the full breadth of the imagery likely helped elevate the track to number-one status as well.

You don't have to be a hip-hop fan to benefit from the message behind "This Is America." Racism and gun violence affects lovers of all genres, and Glover's video — despite brief, false moments of lighthearted fun — is ultimately representative of an uncomfortable reality. It's a reality that, judging by the song's current position at number one, people may finally be paying attention to.