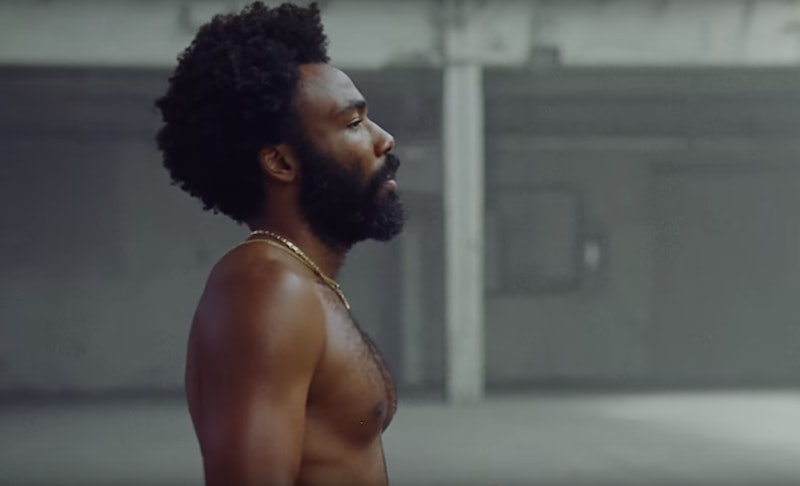 Donald Glover — otherwise known by his stage name, Childish Gambino — caught the nation's attention Saturday night when he released a chilling new music video for his song "This Is America," after hosting the evening's Saturday Night Live episode. Since then, Childish Gambino's "This Is America" video — which was directed by his Atlanta collaborator Hiro Murai, according to Deadline — has prompted a wave of discussion on Twitter, where people have been sharing their thoughts about the video's powerful real-world messages.

After parsing through a chunk of those Twitter-fueled reactions to "This Is America," it seems the general response basically boils down to this: In addition to its cinematographic merit, Childish Gambino's new video, more than anything else, acts as a powerful commentary on gun violence and what it means to be black in America today. Replying to a tweet by Vevo, which posed the question, "What topics come to mind when you watch the new video for 'This is America' from Childish Gambino?" Twitter user @tayruhberreh summarized the very real scope of the video's significance in a single tweet, which read,

"Mass shootings, protests, riots, violence against protestors, white supremacists, and overall being more enamored with trivial things like dance fads / talking about drugs & money rather than making an effort to speak about the realities of our world."

As those who've seen it already know, "This Is America" packs in dozens of thematic elements, most of which double as horrifying real-world references, into its four-minute run. Watching it the first time through is overwhelming, to say the least. Glover pairs cheery synchronized dance moves and a generally upbeat track with a flood of chaotic imagery that, as people on Twitter have noted, essentially serves to inundate viewers with a fragment of the kinds of horrors that some people endure in this country.

Per the deluge of responses to "This Is America" on Twitter, it seems the pandemonium erupting in the background of the video is, perhaps, its most poignant element — or series of elements, rather. For that reason, folks on Twitter are recommending that people watch Gambino's new video several times, so as not to gloss over the scope of its references.

Because, as a handful of sharp-eyed Twitter users pointed out, Glover's primary role in the video appears to be to distract viewers from what's happening in the background. While the camera does its part to focus on Glover — who spends the duration of the video oscillating back and forth between eerily charismatic, jovial dance routines and unnerving, seemingly arbitrary acts of graphic violence — an increasing amount of chaos is happening around him.

In a three-pronged response to the video, the Twitter user @writediversely summed up the impact of Glover's nightmarish juxtaposition and why it's so important to recognize it as such. "Childish Gambino is the distraction, the shiny fun thing making you believe there is nothing else to see," the user wrote, noting that, in the meanwhile, the viewer ends up ignoring the "murder, police brutality, protests and mayhem" erupting in the background.

In a prompt follow-up tweet, the user continued on to explain why these elements of "This Is America" feel so resonant to them. "The historical and cultural tendency for people to express joy in the midst of pain and chaos," the account tweeted, after noting that several people had voiced this particular point. Continuing, the account explained that, "This is real and crucial to the black experience."

Most of the Twitter responses to Gambino's video echoed @writediversely's point in one way or another. Diving into more specific elements of "This Is America" that felt particularly powerful, a couple of Twitter users provided bullet-point lists highlighting elements of the video that they found especially poignant, as well as the real-world tragedies those moments could be referencing.

It's definitely no secret that gun violence, police brutality, and racism exist (and, in some cases, run rampant) in America. In light of that truth, it seems the need for critical, commentary-based art — like Gambino's "This Is America" video — is only becoming more crucial.

With that being said, it seems equally important to understand the real-world context of a video like "This Is America," beyond just simply watching it. And, in this case, as the incisive voices on Twitter suggested, that might also mean re-watching it a couple of times. As many people noted in their comments, there's more than enough to see — and to learn from.

More like this
The Trailer For The Whitney Houston Biopic Has Twitter Feeling Heated
By Radhika Menon
Everything To Know About Taylor Swift’s 10th Studio Album, 'Midnights'
By Grace Wehniainen and Jake Viswanath
What Demi Lovato Really Thinks About Child Stardom, Depression, & Sobriety
By Radhika Menon
Kanye West Apologizes To Kim K "For Any Stress I Have Caused" In Rare Interview
By Jake Viswanath
Get Even More From Bustle — Sign Up For The Newsletter